When COVID-19 first brought the world to a virtual standstill a few months ago (although it seems like years at this point) people started to ask us via social media if we were going to update FM20 to include the virus and its effects.

We decided not to. 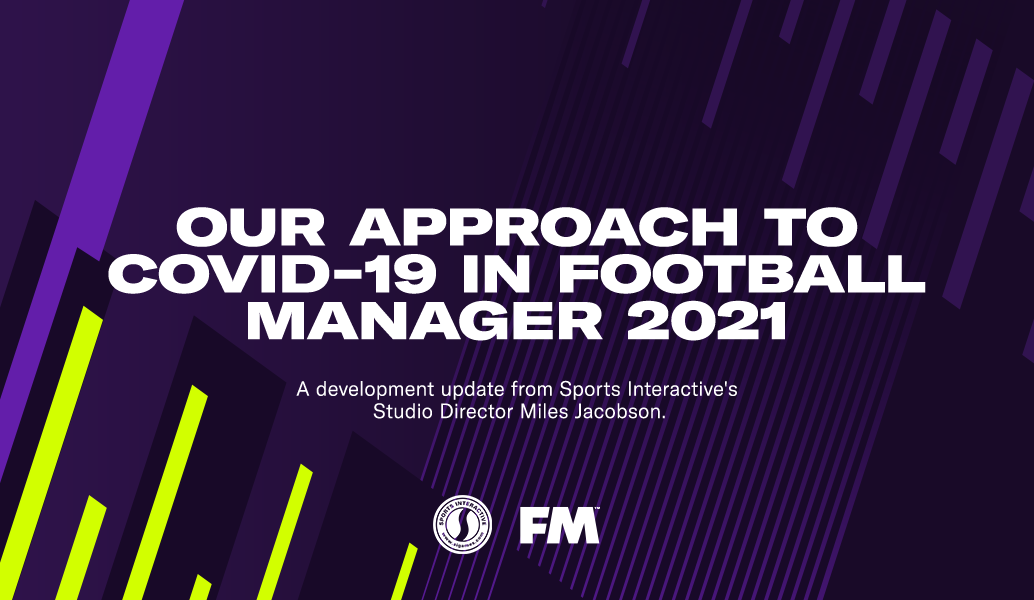 When developing Football Manager, and our games before that, we’ve always tried to make entertainment that provides the best value for money on the planet and also offers an escape from the real world. People have always used FM to create their own fantasy world and we reasoned that now, more than ever, they needed something to take them away from reality… not to remind them of it.

Of course, we couldn’t stop people who ‘mod’ our games from including COVID-19 in FM20, but we really dislike what their work did to our game – and from what I’ve seen on social media, so did most of the people who downloaded and used those mods. FM is meant to be an escape from reality, and having a squad ravaged with an illness has the opposite effect.

However, that was FM20. We knew that our stance would have to change for FM21 as COVID-19 and – possibly more significantly – its social and economic effects have had a serious impact on real world football. As we pride ourselves on FM’s realism, we knew that we had to reflect that, while still offering that escape.

As a result, for FM21 we’ve tried to strike the best possible balance between realism and escapism.

So, for this blog, I’m going to deal with how we’ve chosen to reflect COVID-19 in FM21’s gameplay. If you’re at all interested in how it has affected development, you can find more information by finding out how COVID-19 impacted the making of Football Manager 2021 - it’s something I’m bound to be talking about a lot more in interviews in the coming weeks and months.

There’s also a request for your help in one area.

Let’s start with the money side of things. It’s no secret that football clubs around the world are suffering financially. The absence of supporters from the stadiums not only means a huge loss of revenue from ticket sales, but also from concessions and merchandising.

This will be reflected in FM21, as your chosen club’s finances will inevitably be in a worse state than you would normally expect when you start a new save. The most visible knock-on effect of this will be transfers; we’ve rewritten chunks of our transfer system to ensure that while superstars and wonderkids will retain their value, FM21 will see more ‘loan to buy’ offers, the value of mid-range players dropping and clubs in real financial trouble trying to move players on a more regular basis. However, as money comes back into the game over time, the transfer system will adapt and eventually return to some sense of ‘normal’.

So that’s one area of realism, here’s a little escapism.

Something we thought long and hard about was when (and whether) we should let supporters back into FM21’s stadia. We eventually decided that crowds will attend matches from the very start. The revenue this generates will allow clubs to get back onto an even keel sooner and will help with the above-mentioned in-game financial and transfer systems.

With the leagues, we have adjusted the football calendar where appropriate. In many cases, the usual ‘start dates’ are out of the window, but they soon revert to normal. In certain leagues (those that have already finished by the time the game is released) we’ve made the decision to start at the beginning of next season – and we thank all of our licensors that we’ve discussed this with for their support in this decision.

I’m not going to list all of the leagues affected by this, as that would be a bit too much for this blog (and not all of those decisions have been finalised as yet) but I will provide one good example… MLS. Because MLS runs over the summer, that competition is normally reaching its climax when FM is released and we would therefore allow managers to ‘go back in time’ and play from the beginning of the season. However, with the shift in dates, we are now going to start MLS from the forthcoming season.

The date your save starts may also have changed, depending on the start date of your chosen league. Pre-season will still be five to six weeks (rather than the 12 weeks that they often were during the testing cycle on the game, due to the game normally starting at the start of July) but, for example, this season’s EFL Championship kicks off in September, rather than the traditional August.

Finally on the subject of dates, transfer windows will start by matching their current real life counterparts, but will revert to ‘normal’ in season two.

Match wise, we’re going with substitution rules as they are in real life for season one; if a league is using five subs (rather than three) then so are we. Then, like the transfer windows mentioned above, revert to ‘the old normal’ in season two, unless the competition in question has already indicated that the plan is to adopt the new rule for the long term.

Pre-match, you’ll see team line-ups as normal, as we want to keep the same sense of normality created by having supporters in the ground. Also, you won’t be seeing posts cleaned before penalty shoot-outs as, again, that’s just a reminder to the strange situation of the real world currently that we want to avoid.

Some of these choices may come across as arbitrary, but we’ve looked at every area individually (and the entire game holistically) and we think we’ve made the correct choices.

But there’s one point where we haven’t settled on a decision, because I would like to throw it out to you, the people who will spend huge amounts of time playing FM in the coming months. The feature in question is the new ‘gesture system’ that you may have seen revealed in our new headline features video.

When this system was first devised we included a number of gestures that (at the time) were completely normal, but now aren’t part of daily life – one perfect example being ‘shake hands’ as a greeting. In game, we have changed that one to ‘elbow bump’, which seems to be the most used tactic to avoid hand shaking at the moment. However, I’m aware that that goes against our ‘trying to be Covid free, whilst not completely ripping up the real football world’ policy.

So, we’re throwing this open to a vote. A simple two choice vote between ‘Normal gestures’ or ‘Covid safe gestures’ (so that no one can vote for Handy McHandshake). You can find the vote on my Twitter feed (@milessi) and it will be active for seven days, after which time that is the final decision made.

So in case you didn't see my earlier tweet, this poll, which will be live for 7 days starting from now, is explained at https://t.co/3oVmRppHew and is in regards to the newly added in-game gestures for #FM21
Please read before voting!

That’s it for now. I hope you can all understand the decisions I’ve outlined here and also hope you enjoy all of the new features we’re starting to talk about regarding FM21. Further details will follow regarding FM21 Mobile , FM21 Touch and FM21 Xbox Edition, so keep an eye on all of our channels to stay on top of it all.