The 2. Bundesliga has been one of Europe’s most fascinating leagues this season, in no small part down to it containing several big teams with considerable pedigree – FC Schalke 04, Werder Bremen, Hamburg, Nürnberg and Fortuna Düsseldorf share 27 top-flight titles, large fanbases and multiple domestic and continental trophies between them.

We always love to see young players getting opportunities and for that reason all 18 2. Bundesliga clubs deserve credit for giving regular minutes to some of German football’s brighter young talents. With the campaign having drawn to a close, we’ve put together our XI of the league’s most impressive up-and-comers. 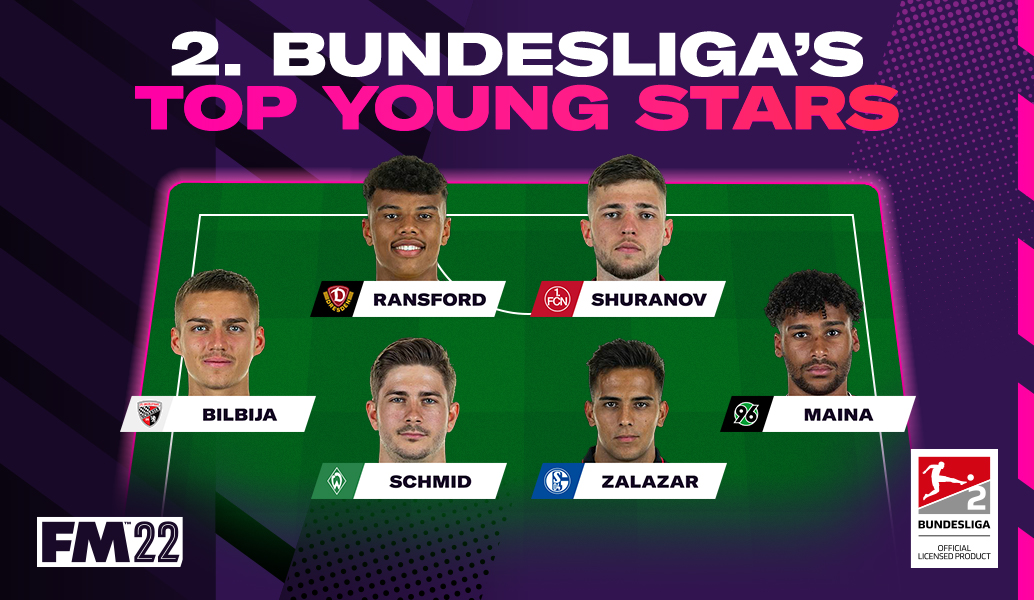 When putting this list together, the only position with which we had an issue was goalkeeper. 2. Bundesliga is a league packed with experienced, high-quality goalkeepers and that meant that the youngest regular starter was the 24-year-old Kastenmeier.

While Fortuna may have not been in the promotion mix, they finished the season with one of the best defences. Key to that was former Germany youth international Kastenmeier, whose is notable in FM22 for his Jumping Reach (14), Work Rate (14), Positioning (14) and Rushing Out (15).

Despite being on the radar of most Football Manager players for several years, the impressive Vagnoman is still only 21 years old.

Although he missed a lot of the season with a tendon issue, it was no surprise that his return in late February coincided with Hamburg experiencing an upturn in form.

Equally capable as a full-back on either side of the pitch, Vagnoman is a quick, agile defender capable of providing an extra attacking option for his teammates, as evidenced by his two goals and two assists from 12 appearances. 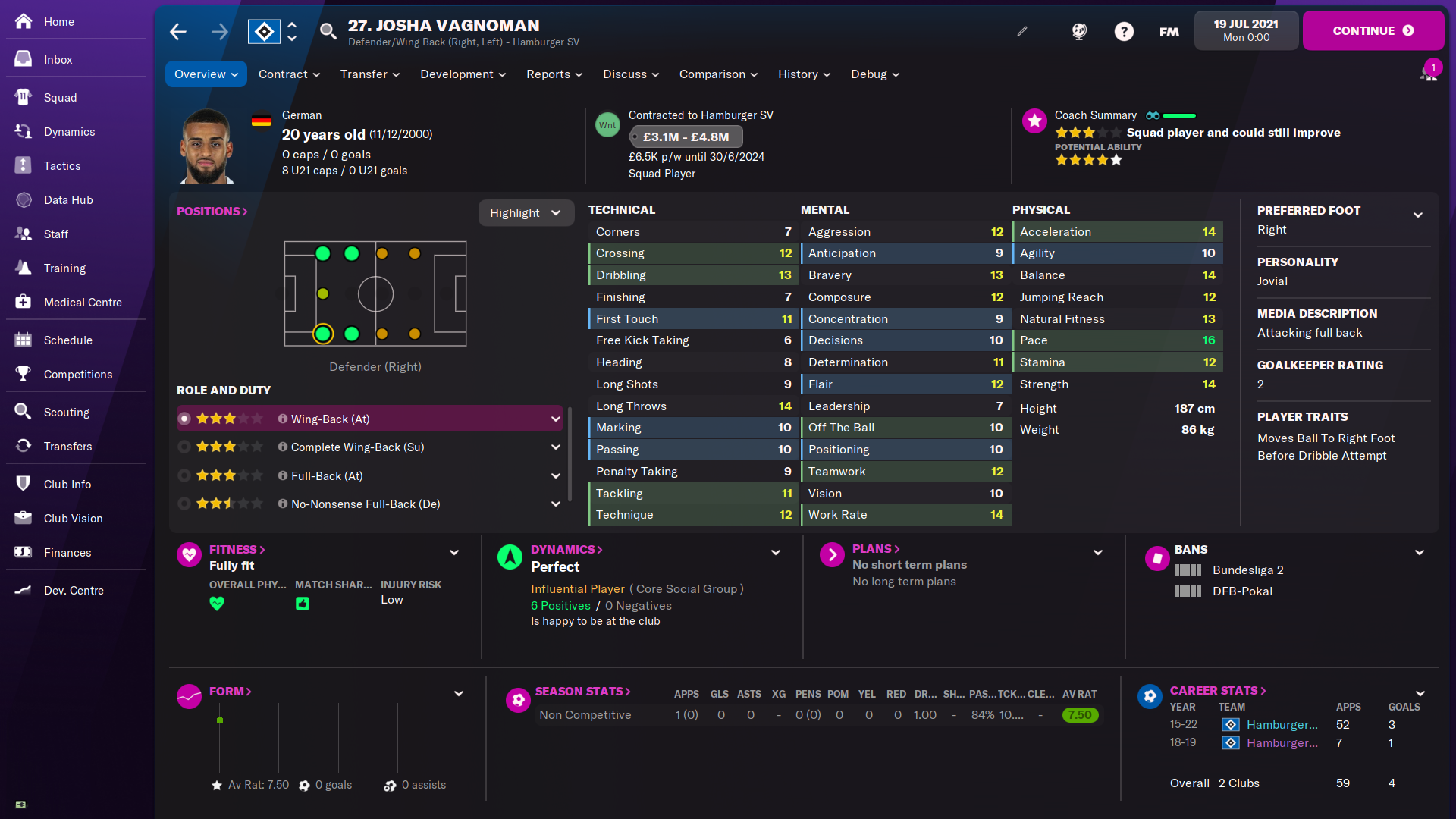 As you’d expect of a man his size, Pfeiffer is a dominant aerial force at both ends of the pitch but he’s proven to be much more than that across his 31 appearances.

Indeed, Pfeiffer has shown himself to be an astute decision-maker and particularly mobile, recording the second highest speed of any player in the 2. Bundesliga this season. A bright future awaits for the 22-year-old.

Simply put, Malick Thiaw has been the 2. Bundesliga’s best defender this year.

Agile, good in the air and a natural leader, Thiaw was an almost ever-present for Schalke, scoring twice in 31 appearances, and formed the bedrock of their successful bid for an immediate return to the Bundesliga.

The 20-year-old, who is eligible to represent both Germany and Finland internationally, attracted a lot of transfer interest in January and we expect those rumours to intensify if he hits the ground running next season. Given that he’s got one of the highest Potential Ability ratings in FM22 in the 2. Bundesliga, we have every faith that he will.

A highly mobile full-back blessed with a wonderful first touch, Agu has been one of the most signed 2. Bundesliga players by FM22 players around the world.

In many respects he’s similar to Vagnoman on the other side, in that both players are rated highly in Football Manager and both are capable of deputising in their either full-back position. Agu is at his best on the right, which is where he was of greatest use to Werder as they secured an automatic return to the top-flight.

Agu already has some Bundesliga experience under his belt from his first season with Die Werderaner; his recent contract extension will prove worth its weight in gold if he can contribute as effectively next year.

It was a miserable 2021/22 campaign for Ingolstadt, who came last and were relegated to 3. Liga. One of the sole bright lights for the Bavarian club were the performances of 22-year-old winger Filip Bilbija.

Bilbija is a skilled dribbler who is at his best beating his man before cutting in on his right foot and either taking a shot for himself or teeing up one of his teammates.

The 22-year-old finished the season with seven goals and an assist, thereby directly contributing to 25% of Ingolstadt’s entire league goal output. Having proved himself to be one of the division’s more impressive young attackers, it’s likely he’ll be attracting a lot of suitors in the off-season.

Romano Schmid was a pleasure to watch throughout the season, a combative, creative hive of industry in the middle of the pitch.

The Austrian finished the season with three goals and five assists but it was overall contribution - the duels he won, the tackles he made, the distance he covered every game and his off the ball movement that helped sustain attacks – that made him such an asset in his second full season with Bremen.

A popular signing in FM22, we suspect this is the start of a long and successful career for the cultured midfielder.

Uruguayan Rodrigo Zalazar put his name in the headlines earlier in the season with a sensational goal from inside his own half but when all was said and done, he contributed significantly to Schalke’s prolific attack with six goals and five assists.

Best described as a strong all-rounder, Zalazar took more shots (85) than any other midfielder in Germany’s second tier and is regarded within Football Manager as one of the division’s most effective set-piece takers.

This was his second season on loan in the 2. Bundesliga from Eintracht Frankfurt and Zalazar took a significant step forward to cement himself as one of the division’s very best players. He’s definitely ready to make an impactful step-up to the rigours of the top flight. 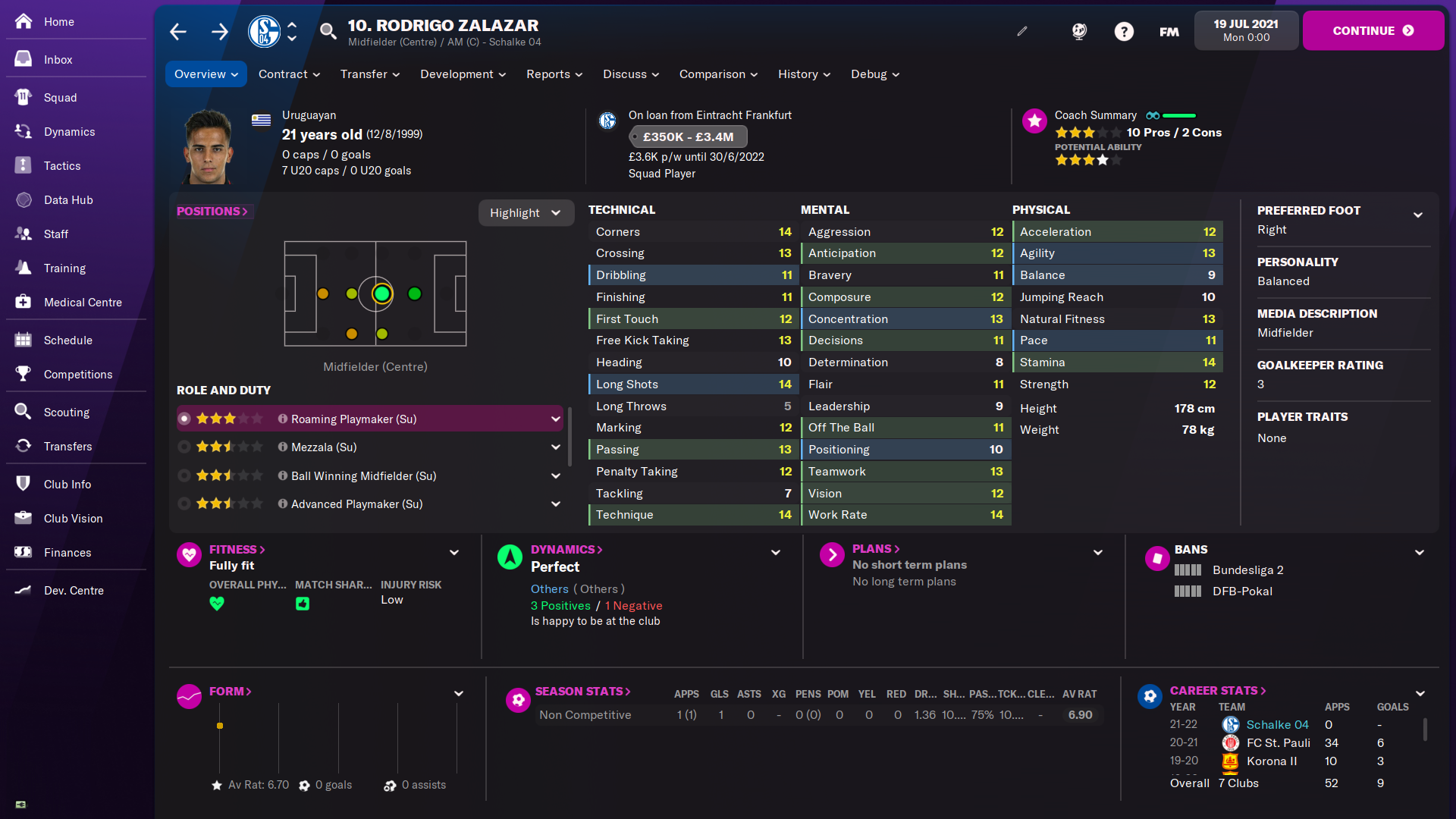 The inability to score goals on a consistent basis was Hannover’s ultimate downfall this season but tricky winger Linton Maina more than contributed his fair share. The 22-year-old, who finished the season with the seventh-fastest recorded speed of anyone in the league, found the back of the net six times.

Maina’s Pace, Flair and Dribbling ability have made him a Football Manager favourite for the last few years. After an impressive real-life campaign, the right-footer is set to light up the Bundesliga next season with FC. Köln after signing a three-year deal.

Although he didn’t score as many this season for Dynamo Dresden as he did in their promotion campaign the previous year, Königsdörffer still managed to impress.

While typically deployed as a striker, Königsdörffer can also play out wide on the right and it’s that versatility, combined with naturally good Finishing, that has made him one of the most popular signings from the 2. Bundesliga in FM22.

Dresden’s loss to 1. FC Kaiserslautern in the relegation play-off may mean we see the 20-year-old donning some different colours next season. 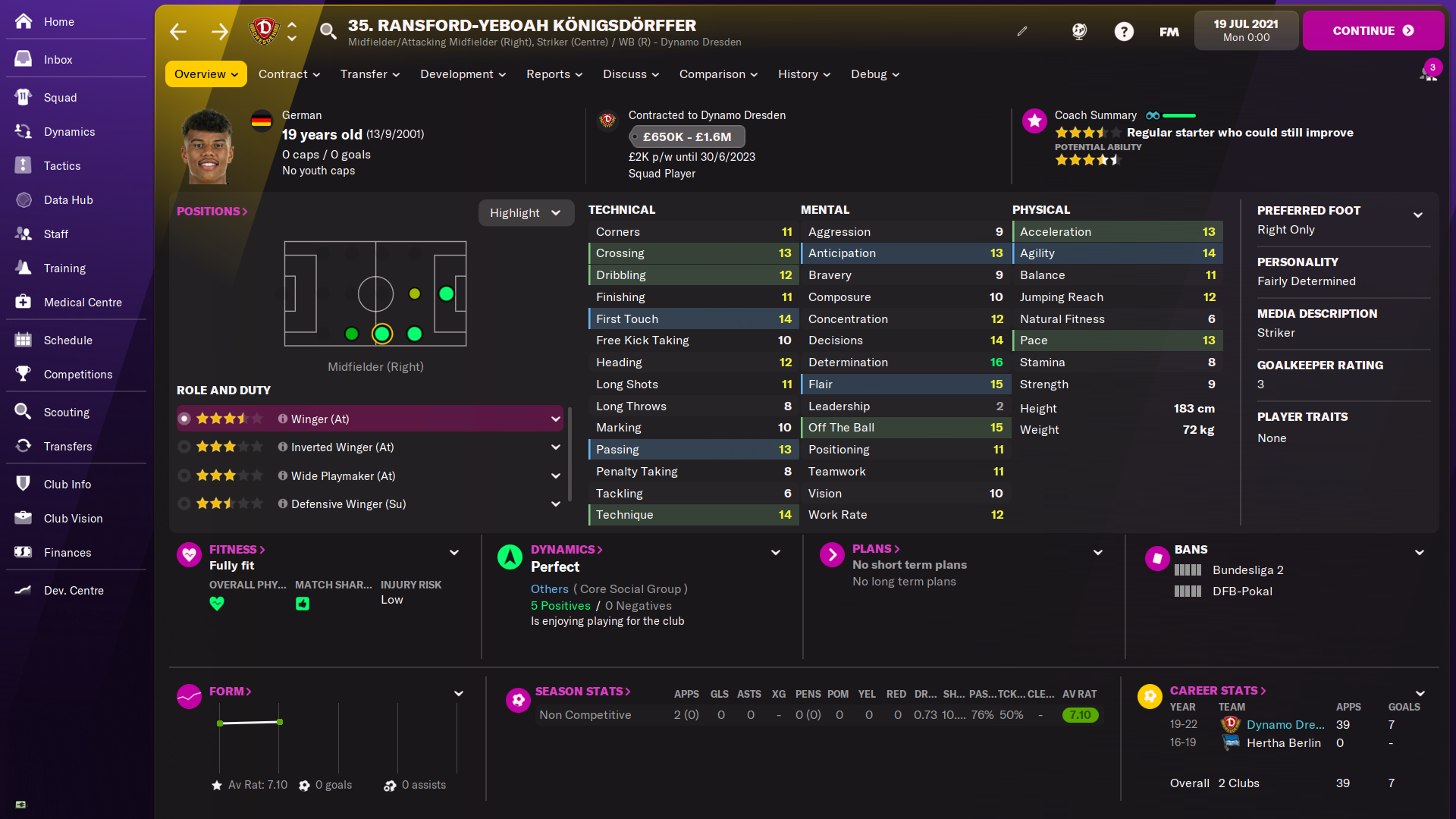 If last season was the one where Shuranov broke through, this was the one where the young striker was given a more senior role in the leading the line for Nürnberg. All in all, with six goals and two assists to his name, he did a good job.

Already quite physically imposing and still yet to fully fit out his frame, Shuranov has shown good Off the Ball movement, instinctive Finishing and a Determination to get on the end of crosses into the box.

With the right service behind him, we can’t see why he won’t get into double figures for Der Club next season.

No team is complete without a subs bench capable of changing the game, so here are the players who just missed the cut: