In line with their increasing real-life popularity, football analytics are an increasingly important aspect of Football Manager. This is seen most clearly through the Data Hub, first introduced in Football Manager 2022 and hugely expanded in FM23.

In his last post on The Byline, FM Stag introduced all of the newly-added team performance metrics in FM23.

Here, he walks through the newly added player performance metrics in FM23 and suggests ways you can translate these numbers into meaningful insights that’ll help elevate your player selection decision-making. 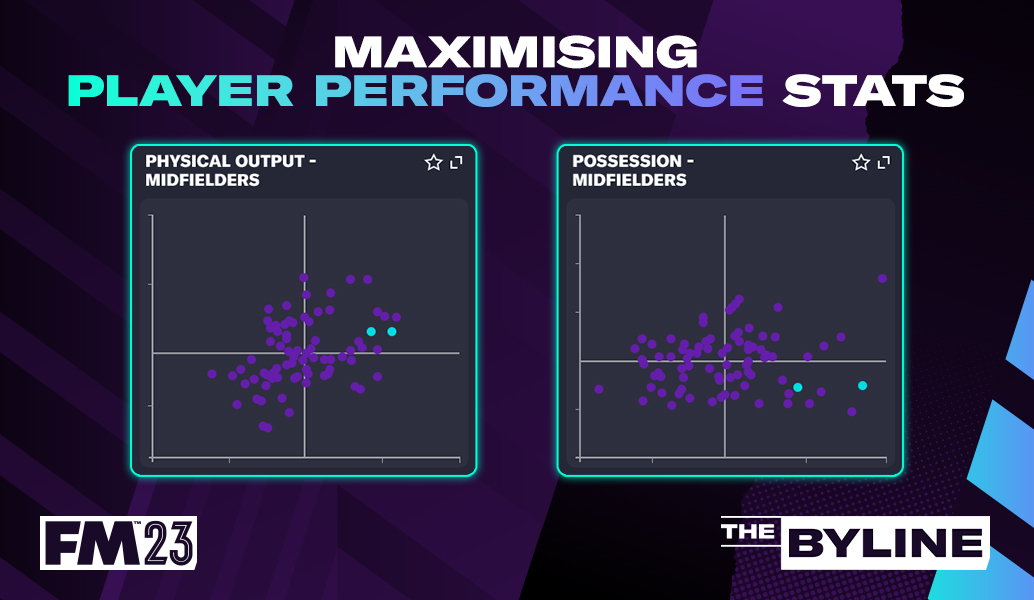 What are the new Player Performance Stats in FM23?

Open Play Key Passes – A key pass is any pass which leads to the receiver attempting a shot at goal. Overall Key Pass numbers can be skewed if the player takes set pieces, like indirect free kicks and corners, but Open Play Key Passes only includes those passes and crosses completed while the ball was in open play.

Expected Assists – While Key Passes record passes that lead to the receiver attempting a shot, Expected Assists takes the xG value of that shot and attributes that to the passer. For example, if you have two players who have both made 10 Key Passes but one has a much higher xA than the other, that means that their Key Passes have led to shots in positions where the striker was statistically more likely to score.

Expected Goals (xG) Overperformance – Expected Goals (xG) calculates the quality of a shot at goal by determining how likely it is to result in a goal, based on detailed historic analysis. For example, a shot of 0.2 xG has statistically a 20% chance of becoming a goal based on the position of the attacker striking the ball, the angle to goal and position of any defenders and the opposition goalkeeper when the ball is struck. xG over and under-performance tracks if your forward is scoring more or less than the quality of their chances to shoot would suggest. If a striker is overperforming their xG then they are either deadly finishers converting low percentage chances or just going through a purple patch of wonderful luck. If they are underperforming their xG, they are either squandering quality chances or going through a spell of bad luck. Either way, you can choose how to address this with either Training, Role changes or by dipping into the transfer market.

High Intensity Sprints – While Distance Covered is a useful metric to measure your team’s ability to cover every blade of grass, it doesn’t tell you anything about the behaviour and attitude of the players while doing so. You can now track how many High Intensity Sprints players in your team have completed and compare them to each other. If your style is counter-attacking and high-pressing but your number of Sprints isn’t up to scratch, perhaps you need players with higher Acceleration, Work Rate and Stamina to deliver on your tactical vision.

Pressures – Pressures are how many times your player has closed down an opposition player in an attempt to complete a defensive action, such as a Block, Interception or Tackle or simply to push them back towards their own goal. The value which looking at Pressures gives you is that often the best defensive action is simply to force the opposition player to turn and play a backwards or sidewards pass. 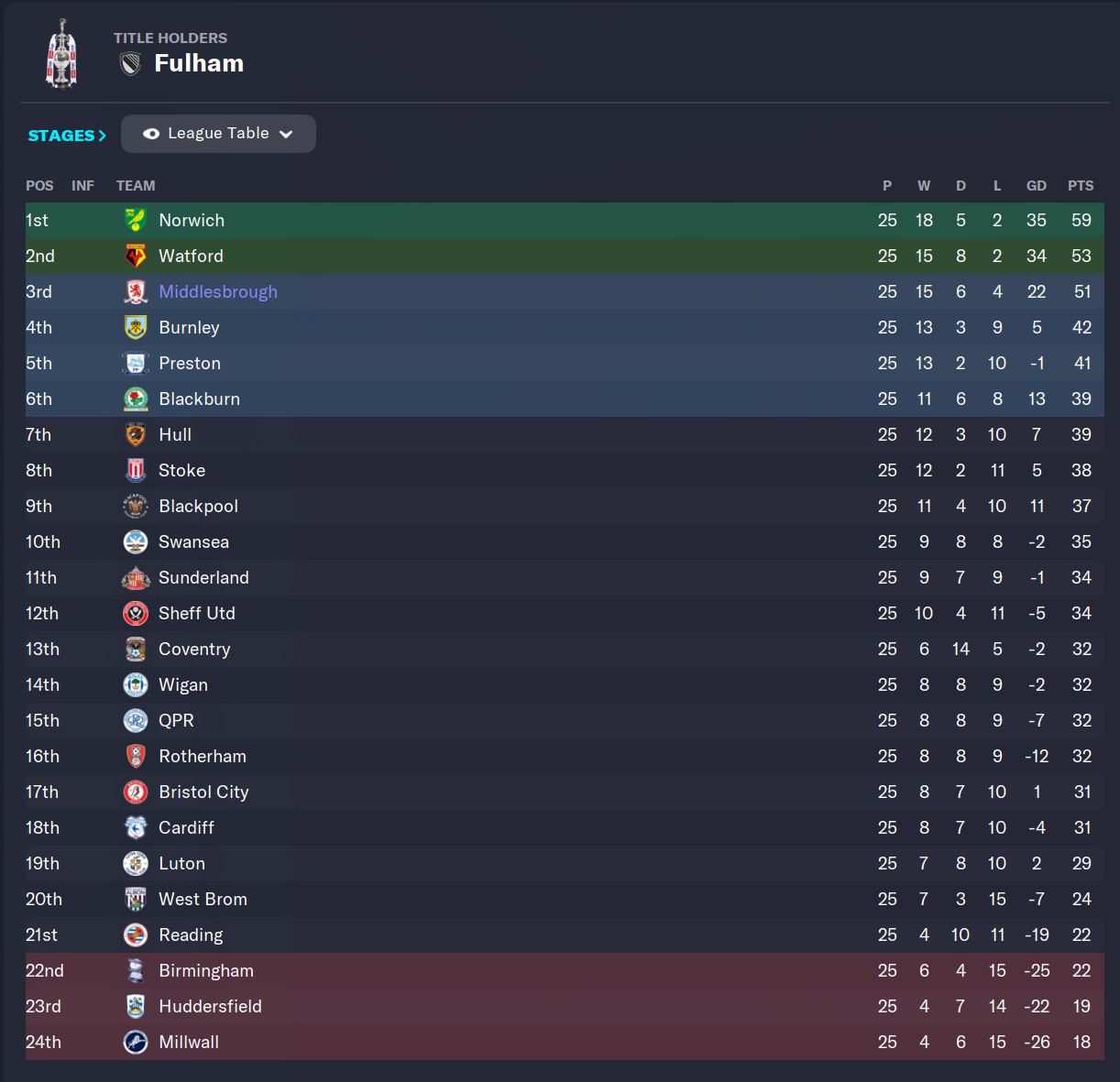 Having started a new career with Middlesbrough, they’re third in the Sky Bet Championship after 25 games. We have only lost four matches and have an impressive +22 goal difference. This seems like the perfect platform for a promotion push, but could we be doing even better and securing an automatic promotion spot? For this article, I’ll be focusing on our midfield to try and figure out if we are making the most of our squad by selecting the midfielders with the most notable statistical output. Before we do though, let’s initially look at the Team Performance screen in the Data Hub. 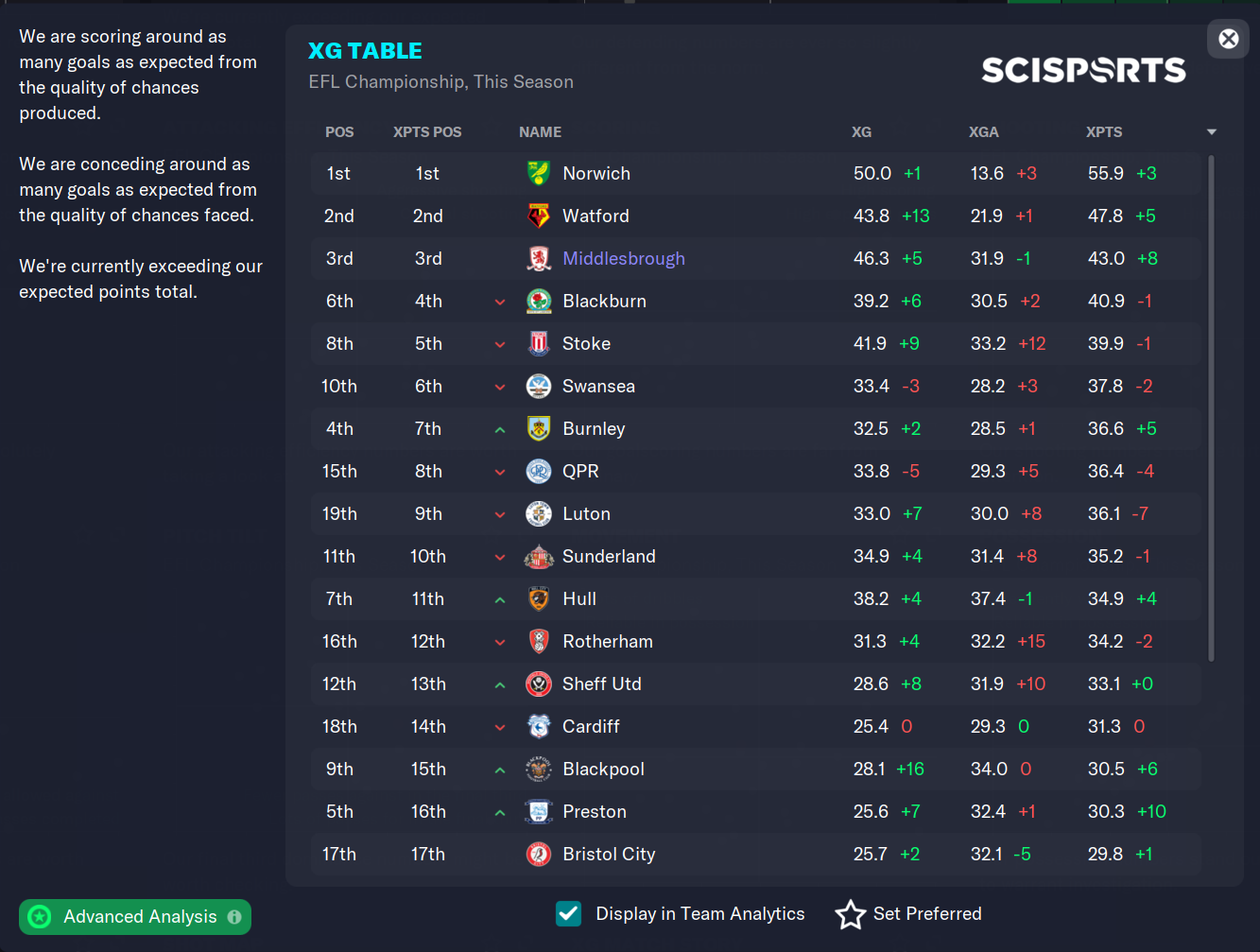 A quick look at the xG Table shows that our third-placed position is what our performances deserve. Admittedly though, we have scored five more goals than expected and picked up eight more points than we were statistically projected to.

A look at the Expected Goals Overperformance column - which you can add to your Squad screen - shows that my front three (Rodrigo Muniz, Ryan Giles and Isaiah Jones) have all outperformed their xG. I need to keep an eye on that, as it’s unlikely that all three will remain as clinical over the course of an entire season. Their luck will run out at some point and shots going in today could very well hit the woodwork or be dragged wide tomorrow.

Looking across our key Team metrics, we are performing better than average in almost every category, and apart from a concern that the majority of our successful Defensive Actions occur close to our goal in our defensive third, things are looking good.

As such, I’ll turn my attention to the Player Analytics tab in the Data Hub to see the visualisations of our individual midfielder’s performances. The Passing Progression – Midfielders scatter plot is a good place to start. 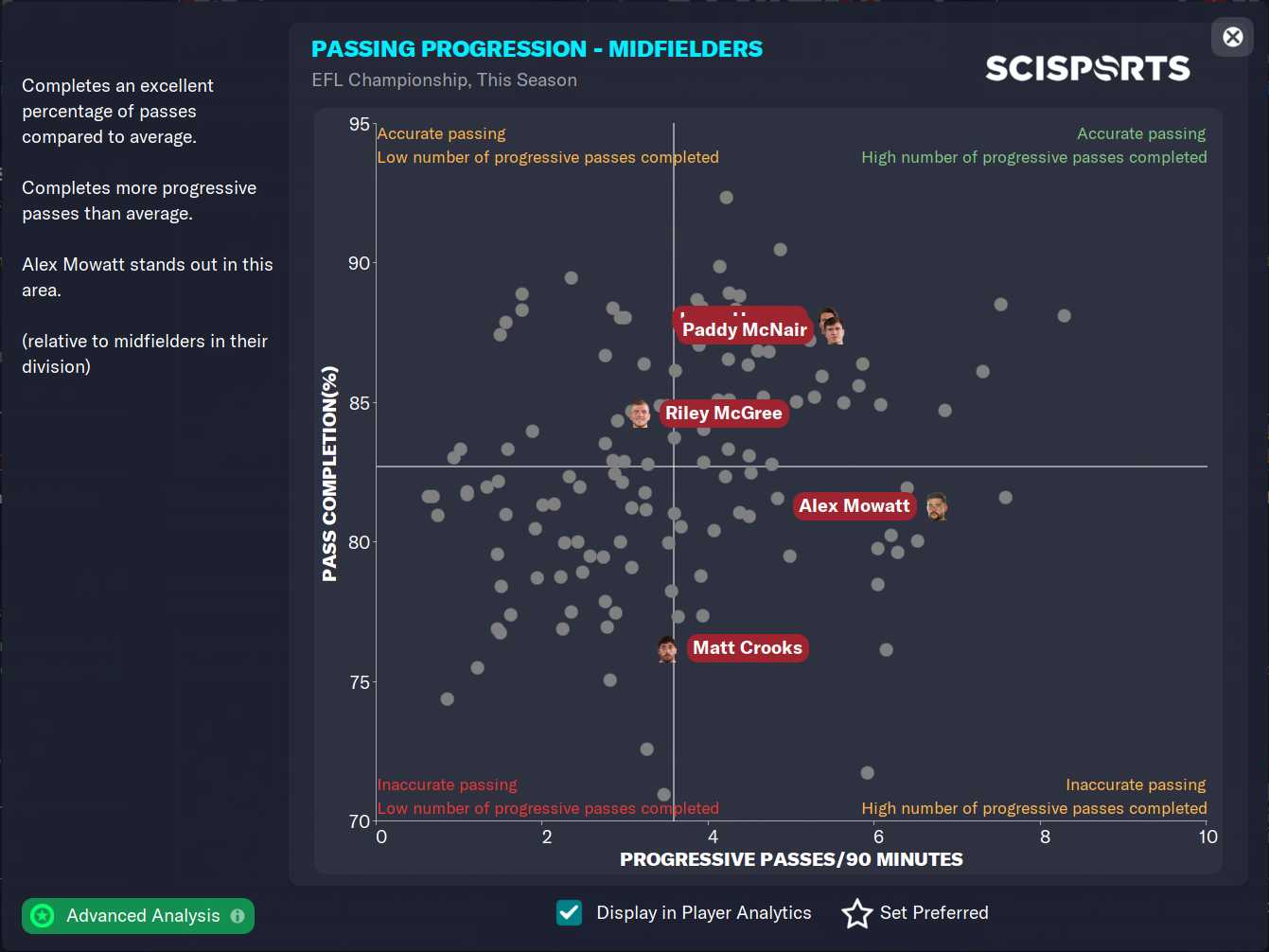 Alex Mowatt has so far started seven games and appeared as a substitute in a further 16. He isn’t currently in my first-choice midfield but he has still clocked up nearly 800 minutes of on-field time, so his data sample size is big enough to derive insight from.

It appears he is our most progressive passer by a considerable margin in midfield. Matt Crooks is my first choice for that spot in our 4-2-3-1 system, but I now know that Mowatt represents a more progressive threat than Crooks. Maybe his performances merit more starting appearances? Jonny Howson is the midfielder whose name is hidden under Paddy McNair’s. Howson is a first team regular.

Let’s look at two other new metrics for Football Manager 2023, Non Penalty xG and xAssists, which are compared in the Expected Attacking Output graph. 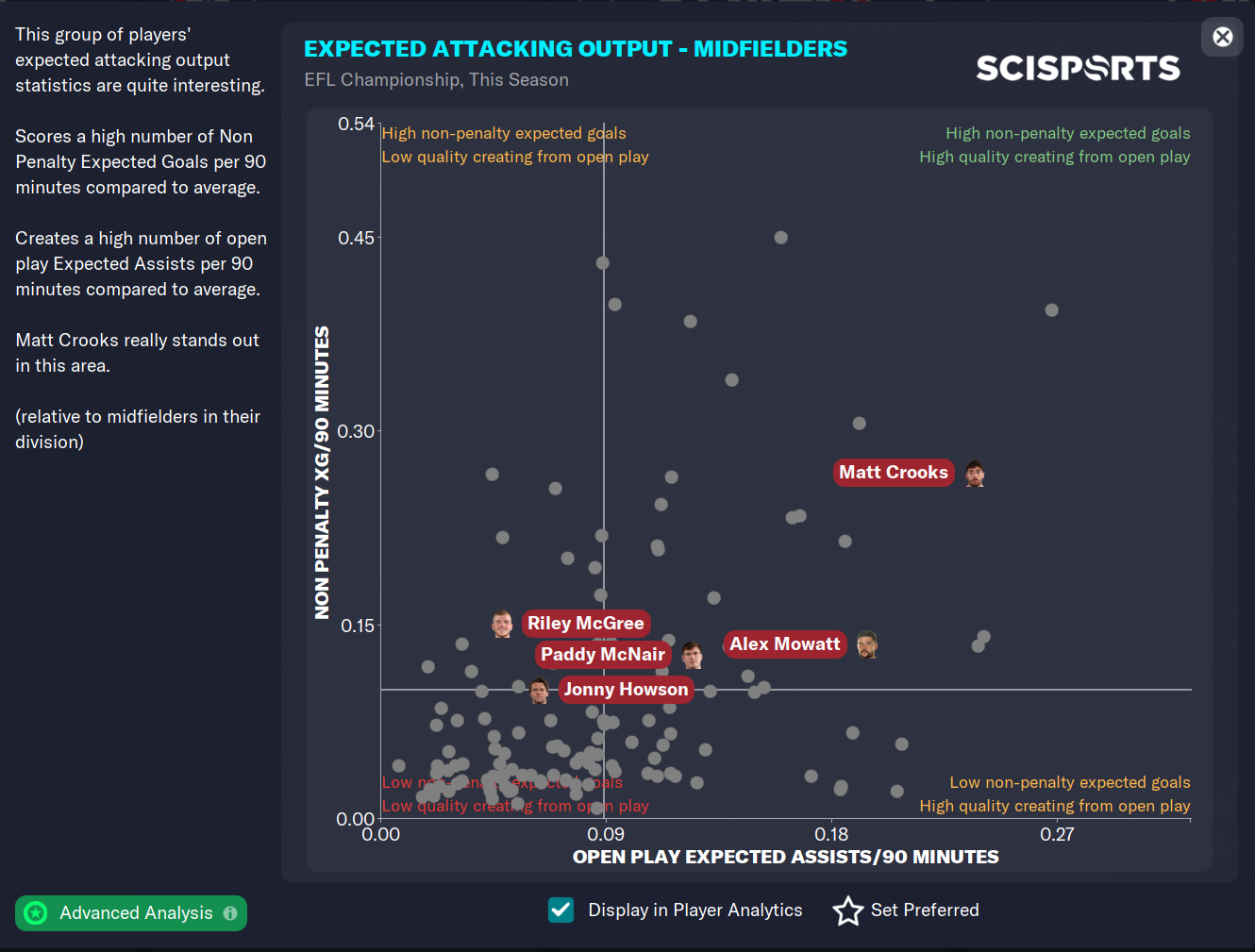 So here is where Crooks proves his massive value to the side. The quality of his key passes is so high that he sits as one of the highest xA/90 midfielders in the entire division while also getting into enough high potential goalscoring positions himself to sit high on the chart for np-xG per 90.

Where Mowatt uses the ball to move it forward directly and effectively, Crooks flexes between playing passes leading to high xG positions for teammates to shoot from and getting into positions to receive those Key Passes himself too.

It’s starting to look like the two central midfielders in my 4-2-3-1 should really be Crooks and Mowatt, not the current combination of Crooks and Howson.

Let’s look at a few other numbers first though. 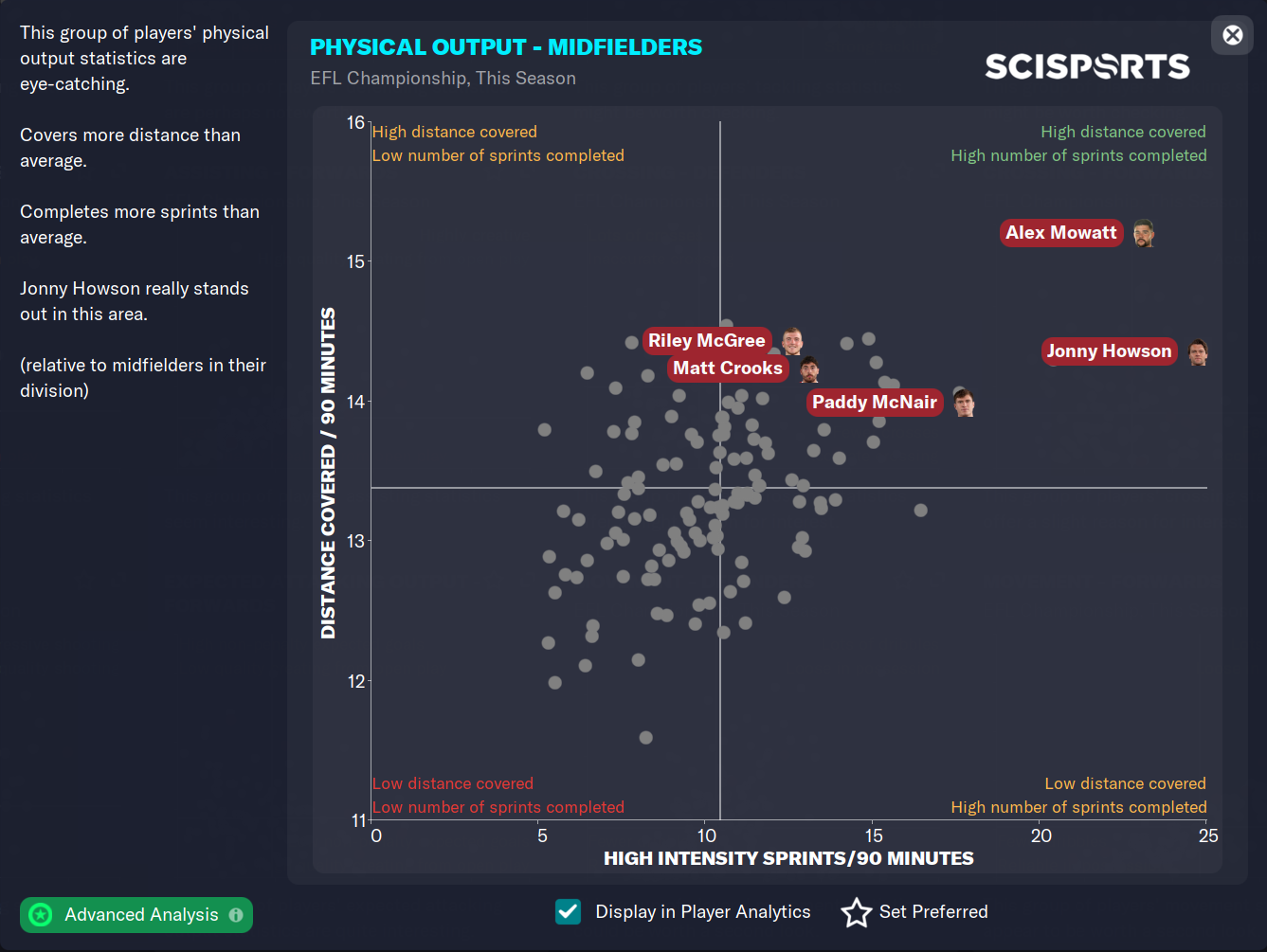 Now here is where Jonny Howson’s unique value become apparent. Howson breaks into High Intensity Sprints more than any of his teammates and more often than any other midfielder in the Sky Bet Championship. Though not pictured here, looking at the Pass Completion % for my three key midfielders on the Squad screen shows that Howson completes 88% of his passes compared to Mowatt’s 82% and Crooks’ 76%. In related metrics, Matt Crooks completes 2.05 Open Play Key Passes per 90 whereas Mowatt delivers 1.02 and Howson 0.90.

So what should I do?

Let’s summarise what we have learned from this quick dive into the Team Analysis and closer look at the new player performance statistics.

Middlesbrough are in our rightful table position, third, in the Sky Bet Championship based on the quality of our performances. An advisory note is that our three main forwards are all overperforming their xG so far this season, so the goals may eventually dry up.

We also defend a little closely to our own goal for my liking, and I would ideally like to push play a little further towards the opposition’s half.

Our first-choice midfield pairing of Matt Crooks and Jonny Howson give a nice balance of work rate and offensive threat, but I’m missing a trick in keeping Alex Mowatt on the bench so often. His Progressive Passing numbers are unmatched. He gets the ball forward more than anyone else in our side. Though Howson sprints more often and completes a higher percentage of his passes, Mowatt covers more ground overall and is a bigger threat in the creation of goalscoring opportunities.

I think it may be time to switch to starting Crooks and Mowatt, with Howson coming in when we need a hard-working team player who will play low-risk passes and effectively control the tempo of the game. Perhaps the move here is to select Howson in games we are expected to be under pressure in, while Mowatt plays when we need a spark leading to a couple more goalscoring chances.

We are in a strong league position, and I am pleased with our performances, but with this new insight, I may have found marginal gains that will improve us even further. All by looking at the underlying numbers and a handful of Data Hub visualisations.

Data alone cannot win football matches. There is no instant-win formula in FM23, in the same way that the results of football matches in real life are truly unpredictable and based as much on intangibles like emotion and desire as skill and technical ability.

That said, figuring out in a few clicks exactly where my player selection strategy might be improved and in turn may improve my team’s fortunes? That is a powerful and useful insight to draw from a quick look into the statistics.

How will you utilise the new player performance metrics available in Football Manager 2023 to inform your player selections?