The stratospheric rise in the popularity of analytics in football is undeniable. From various notable sports publications and football broadcasters embracing Expected Goals (xG), to websites and social media accounts dedicated entirely to the examination of the beautiful game in the form of meaningful numbers and useful metrics, it’s everywhere. Analytics have been an integral part of Football Manager for a number of years, and Football Manager 2023 takes this to new heights.

In this article, FM Stag takes us through the newly added team performance metrics in FM23 and suggests ways you can translate these numbers into meaningful insights that’ll help you elevate your tactical decision-making. 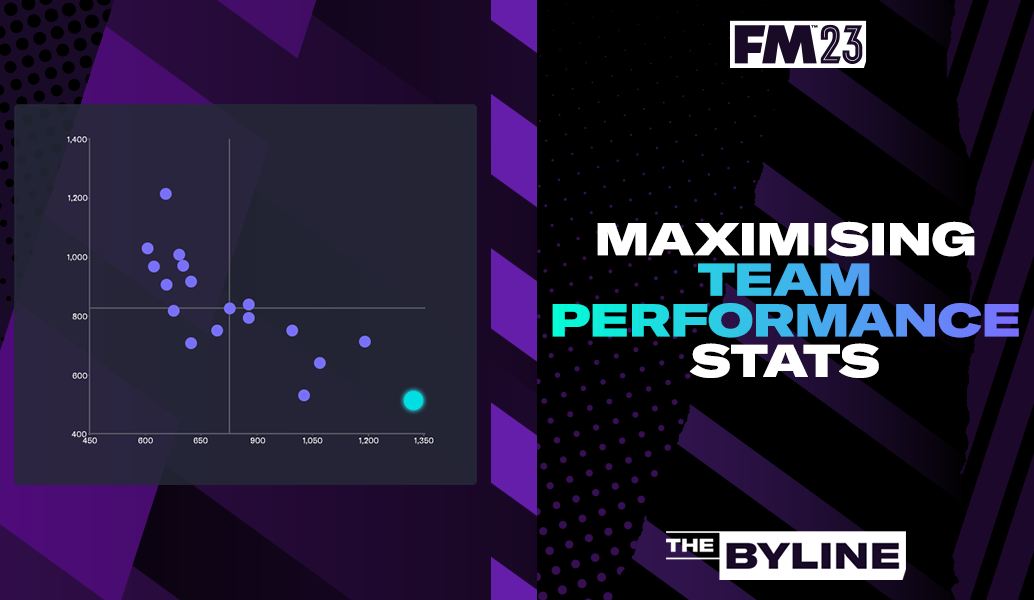 WHAT ARE THE NEW TEAM PERFORMANCE STATS IN FM23?

Non-penalty Expected Goals – xG assigns a value to the likeliness of a shot going in, based on thousands of hours of analysis of previous goals. For example, a shot with a value of 0.2 xG has, statistically, a 20% chance of becoming a goal based on the position of the attacker striking the ball, the angle to goal and position of any defenders and the opposition goalkeeper when the ball is struck. Penalties are very high xG opportunities to score, so Non-penalty Expected Goals removes these anomalies from the numbers, so you can get a clearer picture of your team’s creativity in comparison to others based on the quality and quantity of your non-penalty goalscoring chances alone.

Expected Goals Underperformance / Overperformance – Are you scoring less or more than the quality of your chances would suggest? If your team is underperforming (scoring fewer goals than your total xG) then perhaps you need more clinical finishers. If you are overperforming, your players are either deadly and finishing chances they have little right to, or your team are going through a lovely purple patch with more than your fair share of luck. Either way, there is no room for complacency. 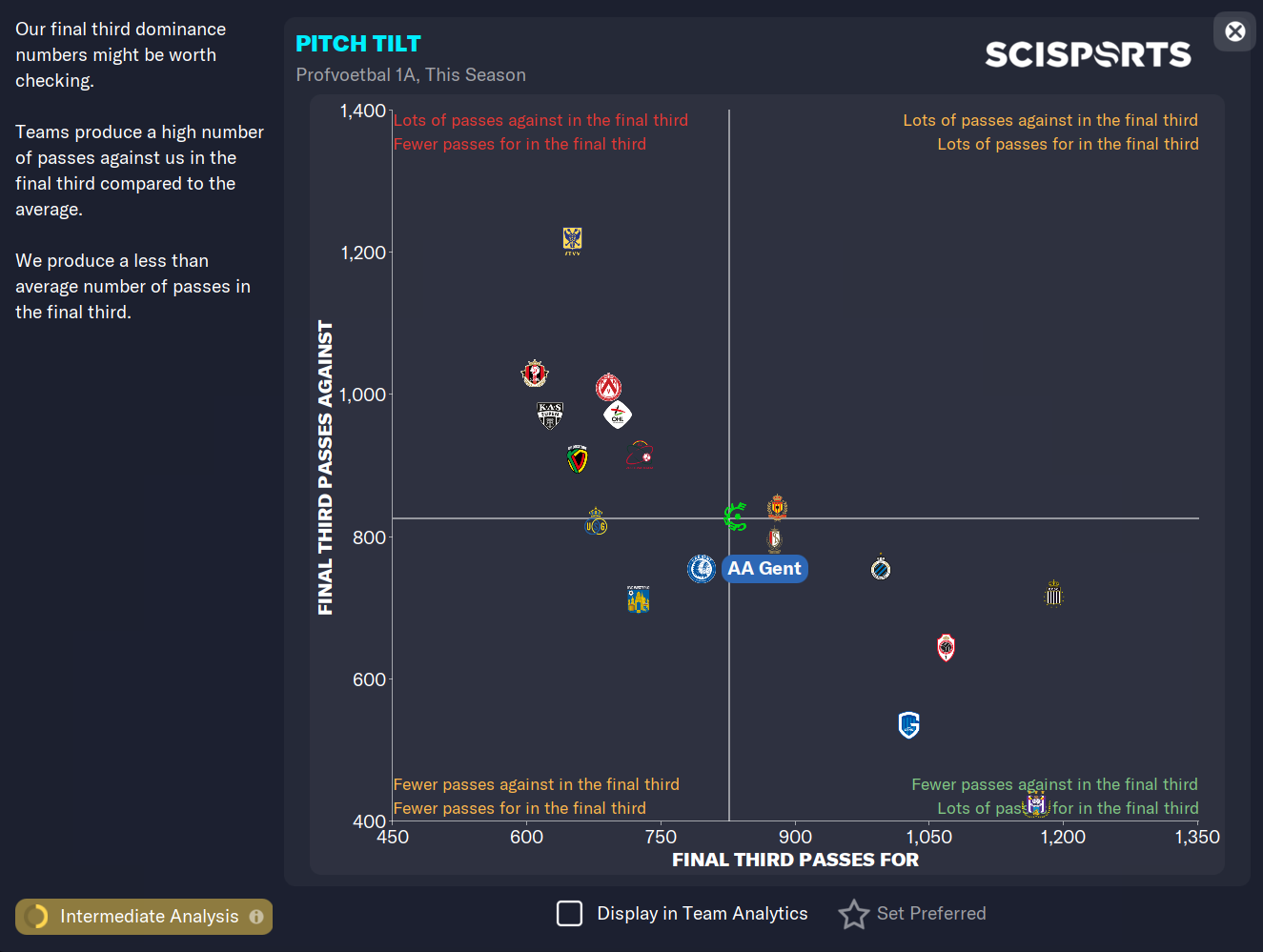 Final Third Passes / Pitch Tilt – For many years we have been able to see how many passes our teams are completing in Football Manager. What’s new in FM23, however, is the ability to see how many passes your team has made which have moved the ball into the opposition’s defensive third. Completing more passes in total than the opposition suggests domination of possession, but if those passes are mostly sideways and backwards, your team may in fact be playing in a sterile, keep-ball manner. By looking at Final Third Passes instead, higher numbers here illustrate how much more offensively adventurous you are than your opponents, putting the ball into the opposition’s danger area with regularity. Pitch Tilt is this metric expressed as Final Third Passes For vs Final Third Passes Against and is found in the Data Hub as an available Scatter Graph.

High Intensity Sprints – While Distance Covered is a useful team metric to measure your team’s ability to cover every blade of grass, it doesn’t tell you anything about the behaviour and attitude of the players while doing so. Did your midfielder jog around for those 10 kilometres covered in the last match, or did they charge around, sprinting hard and closing down players in an aggressive press? You can now track how many High Intensity Sprints players in your team have completed and compare this to the teams around you. If your style is counter-attacking and high-pressing but your number of Sprints isn’t up to scratch, perhaps you need players with higher Acceleration, Work Rate and Stamina to really fit in with your tactical vision.

Opposition Passes per Defensive Action (OPPDA) – OPPDA measures how many passes you allow your opponent to complete before your team completes a successful defensive action. Do you let the opponent pass it around five or six times and progress into your half before someone completes a successful tackle or interception? Or do you press opposition players immediately, allowing them only one or two passes before one of your players gets a foot in and wins it back? It’s risk vs reward though, remember. Depending on your style, over-committing in the press may see you caught out on the counter, or worse, exhaust your players entirely.

Ball Share / Possession – In another new and helpful change for FM23, Ball Share has been added alongside the existing Possession metric. Put simply, Ball Share effectively tracks the balance of which team has the ball for more seconds on the clock than the other. Possession alternatively now tracks this balance of play based on how many passes each team completes. Both metrics tell you something different about your performances. Ball Share tells you how long your team had the ball for, whereas Possession now tells you what your team did with it when they had it.

My AA Gent side in the Jupiler Pro League in Belgium are in 10th position after 15 matches of our first season in charge. Performances have hardly been breathtaking, but we do seem capable of scoring at least once in each game.  The Gent board want us to finish in the top five places and pre-season predictions had us finishing just below that in sixth. We are clearly underperforming.

Trying to turn around an underachieving team can often lead to tearing up the entire tactical plan and starting again. For the purposes of this article, I’m diving into some of the available team performance statistics to try and identify insights that’ll inform a single reactive tactical tweak to improve AA Gent’s fortunes. 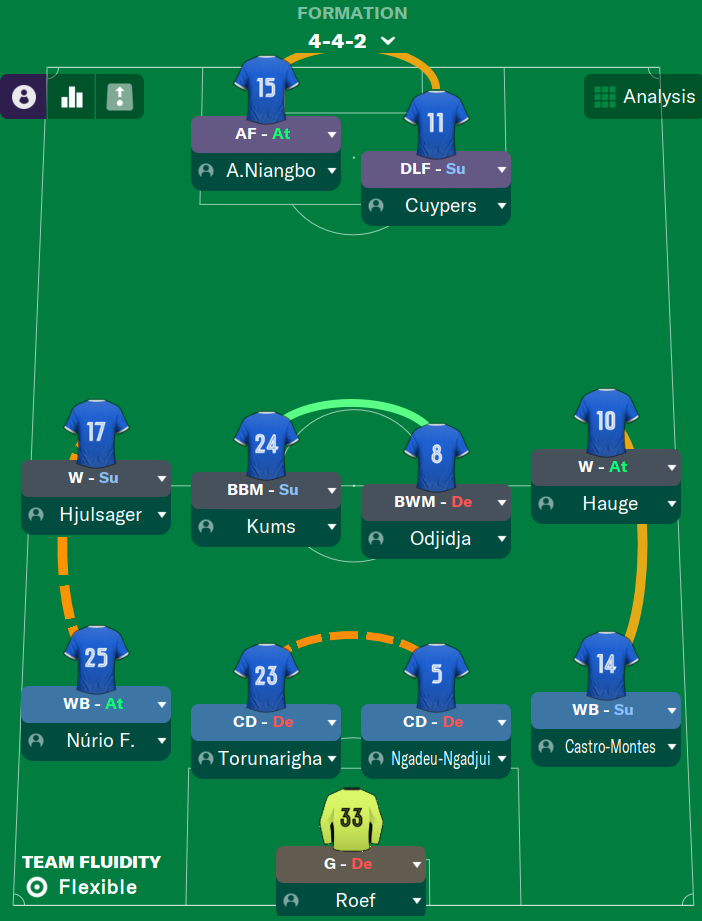 Currently we play a flat 4-4-2, focusing on Wing Play. From watching our highlights, my observation is that I feel that we are creating lots of chances in this fairly well-balanced counter-attacking setup.

Let’s first take a quick look at the competition table for Non-Penalty Expected Goals to see if the eye test is proved to be right.

As I expected, AA Gent are creating lots of chances. The third highest in the whole division in fact. Given our lowly league position of 10th, something else must be a bigger obstacle to success. 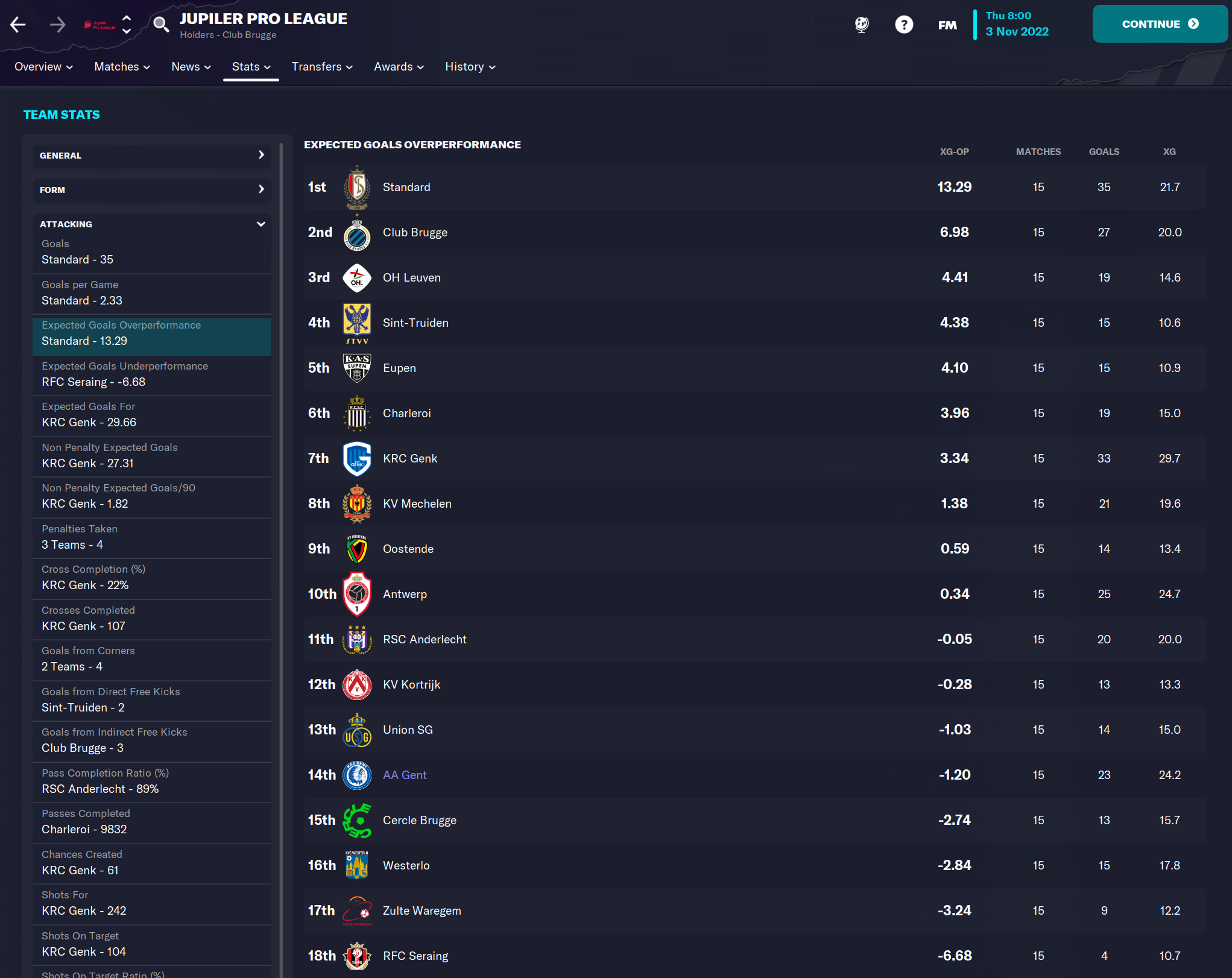 Now I can see an issue. For Expected Goals Overperformance we are down in 14th place. While we have scored the fifth highest number of goals in the league from the third highest xG, we are not taking advantage of our positive play and scoring as many as we could be. Other teams are evidently more clinical; our profligacy is damaging our ability to win football matches. 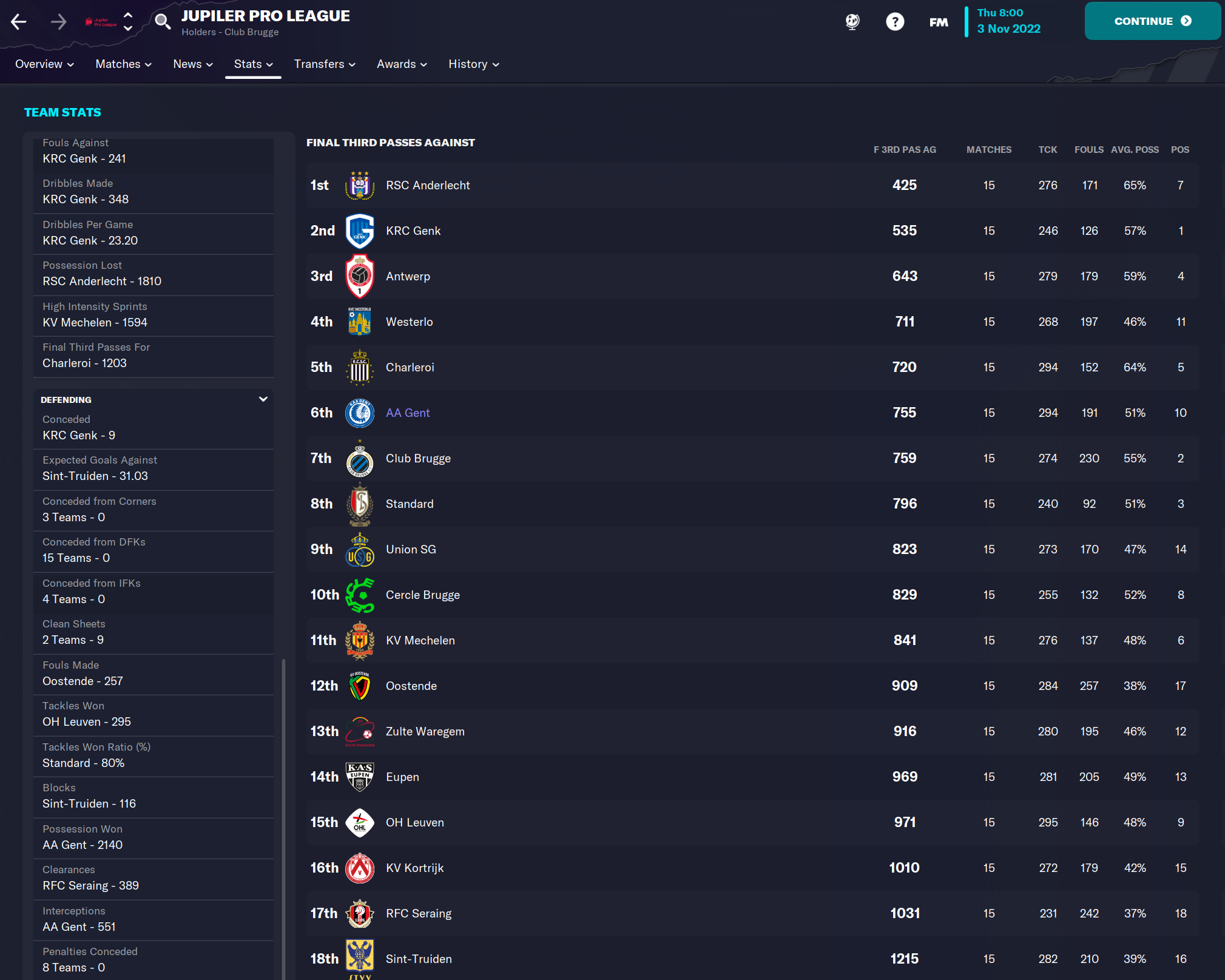 In a defensive sense, we are sixth best for OPPDA, so we press more effectively than our league position suggests, and we allow the sixth fewest Final Third Passes. There is nothing instantly worrying there.

What about the league xG table? What is that telling me? 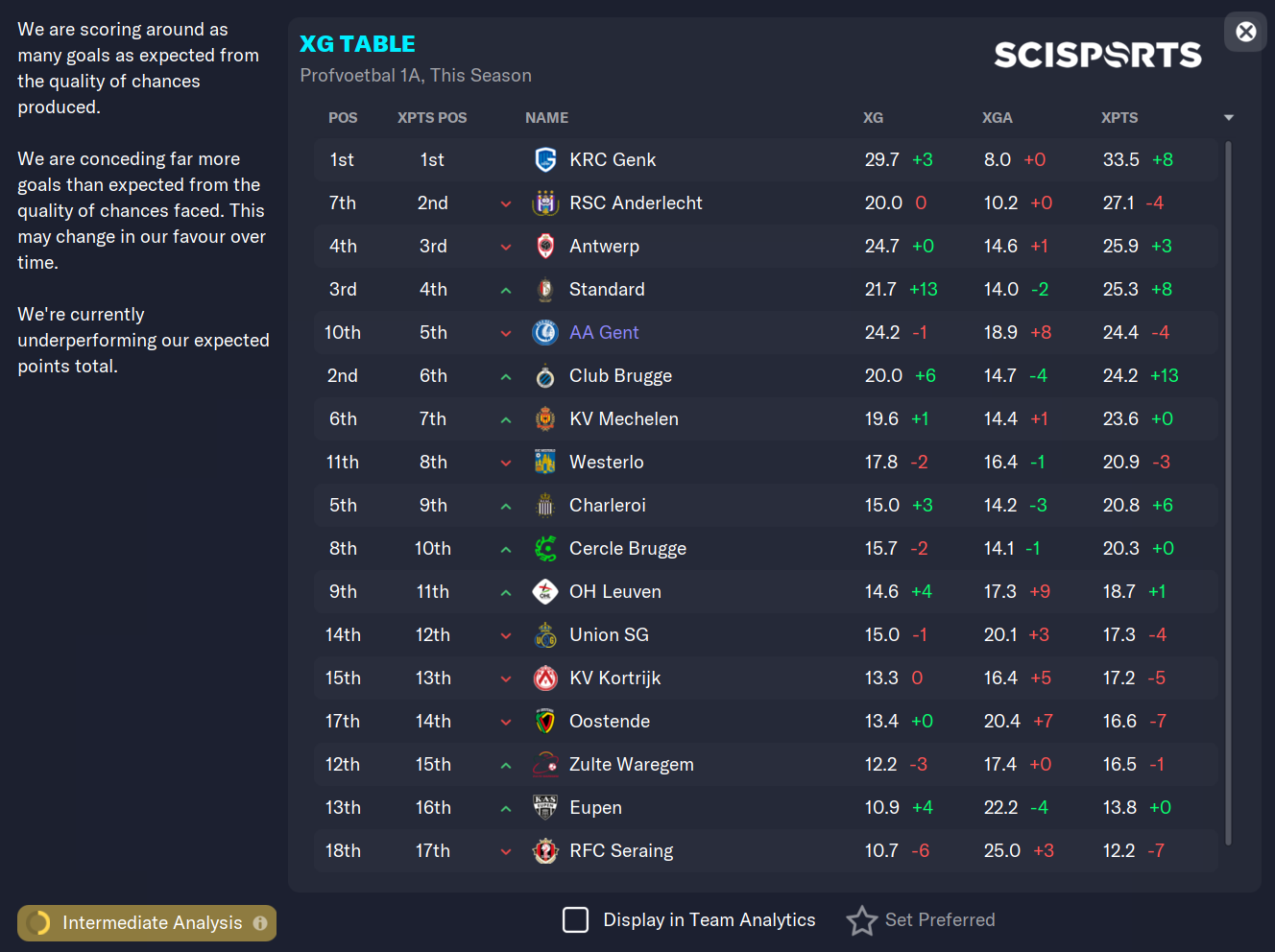 I think this is our most glaring tactical problem, but what is it specifically? Let’s dig a little further to find out. 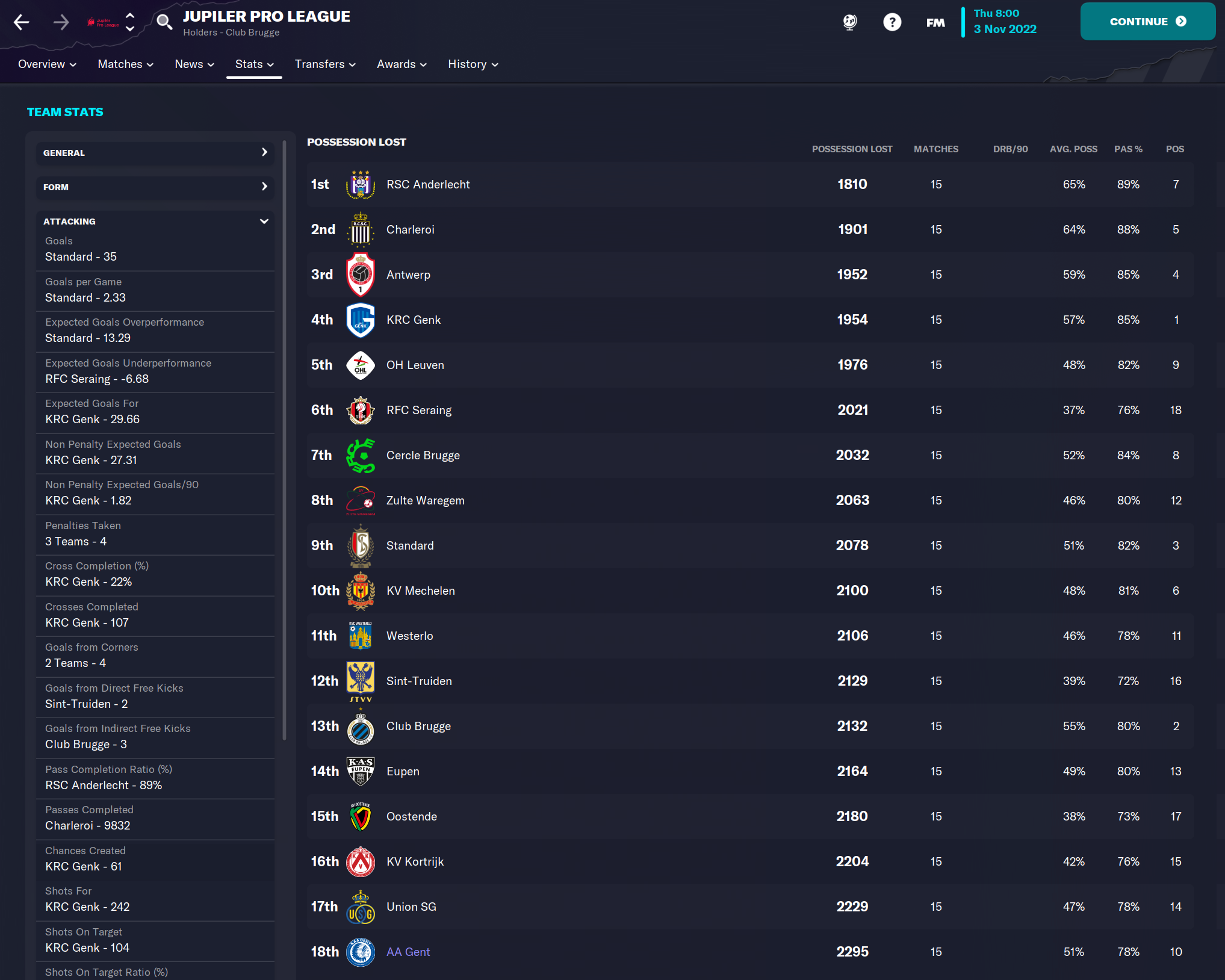 After a closer look, I have found something crucial in the numbers. We have lost possession more times than any other team in the division. Bottom of the table in fact.

WHAT SHOULD I DO NOW?

Performance statistics don’t carry all the answers but they can point to our problems in unique and meaningful ways.

When I first saw our lofty position in the nP-xG table in comparison to our actual results, I was tempted to change our striker roles. Upon greater inspection, we have only scored one fewer goal than the quality of our chances created would imply.

Defensively, conceding eight more goals than expected would ordinarily indicate to me that my defenders or goalkeeper can be pointed to as the problem. Either the ability of the players, or more likely the combination of roles in the back three, four or five. To fix it, I would instinctively be tempted to press higher up the pitch than our current Low Block system does and try to reduce the amount of time the opposition has in possession. Maybe go to a three Centre-Back system and up the Pressing Intensity to get a bit more share of the ball and keep play further away from our penalty area.

However, the reality is that we were sixth in the table for OPPDA and also prevented Final Third Passes better than two-thirds of our rival clubs. Of all the metrics available to me, I can see that the most critical problem is that we lose possession more than any other side in the division. As such, the focus should be on retaining the ball more effectively. My direct passing style may need to be toned down to slightly shorter to reduce the risk of losing the ball.

The one tweak I am going to make is to remove Passes into Space as a Team Instruction. When you have passers with great Passing, Technique and Decisions coupled with athletic forward players with high Anticipation, Off the Ball movement and Acceleration, passing the ball into the space ahead of running receivers is a lovely tactical idea and route to goal. Clearly in our current position with our current group of players, that isn’t working. Otherwise, we wouldn’t be rock bottom in the Possession Lost table.

Normally I would make more tactical changes based on what the numbers are telling me about our performances when we are underperforming expectations, but for the purposes of this article, I wanted to narrow it down to just one tweak. 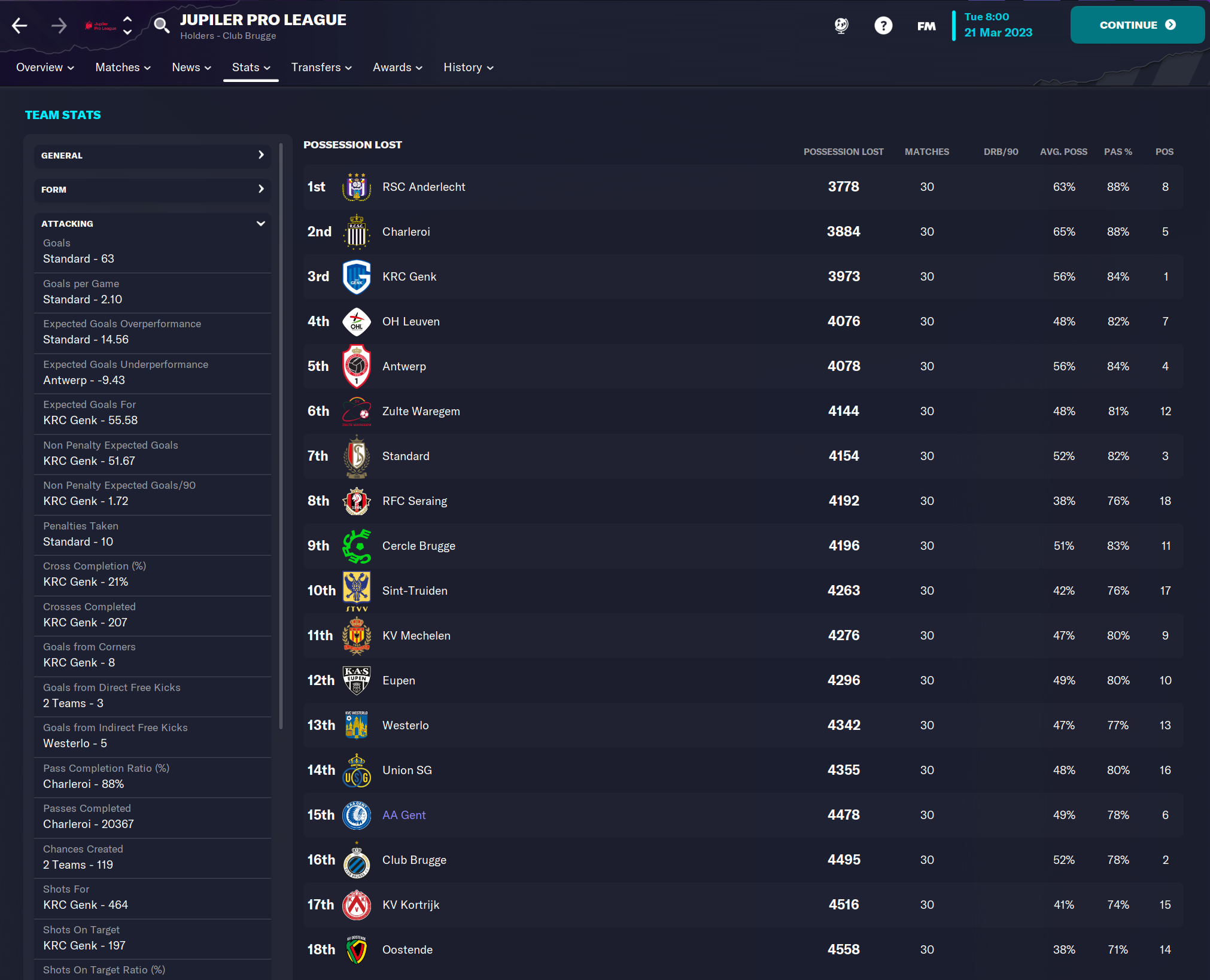 Fifteen games after the tweak and we have risen three places in the Possession Lost ranking. Much of the damage was done in the first 15, so I am delighted to have risen so notably. Of course, I can’t say it’s solely down to my one tactical tweak, but we’ve also risen in the league table from 10th to sixth. We’ve dropped from third to fifth in the Np-xG table, so our turnaround in form is clearly down to defensive improvements as our attacking potency has dropped off a little bit in games 15-30 in comparison to 1-15. Ultimately, the tactical change had the desired effect.

That said, figuring out in a few clicks exactly where my strategy might have gaps and in turn help suggest a tweak or two that may improve my team’s fortunes? That is powerful and useful insight to draw from a quick look into the underlying numbers.

How will you utilise the new team performance statistics available in Football Manager 2023 to inform your tactical decision-making?