6 Americans plying their trade in the Bundesliga

The Bundesliga is renowned as a fertile breeding ground for elite soccer players and the current roster boasts a reasonable number of established and promising Americans who are headlined by a genuine world-class talent. Below we take a closer look at six of them and what qualities they could bring to your roster in Football Manager 2019.

Pulisic has already been described by some as America’s “best ever” soccer player and can now arguably be regarded as the brightest young talent in the Bundesliga. Boasting sublime technique and a quick turn of speed, Pulisic has proven to be one of the most consistent performers in an excellent Borussia Dortmund team. This season he’s been played on the right wing, scoring three times and creating four assists in all competitions. If Pulisic continues to develop this rapidly then Dortmund may have a fight on their hands to fend off suitors for his signature.

Pulisic’s Dortmund side currently sit top of the Bundesliga and are unbeaten after 11 matches as they seek to bring FC Bayern’s domination of the league to an end. With a squad packed full of young stars, the future looks very bright indeed for Die Borussen. 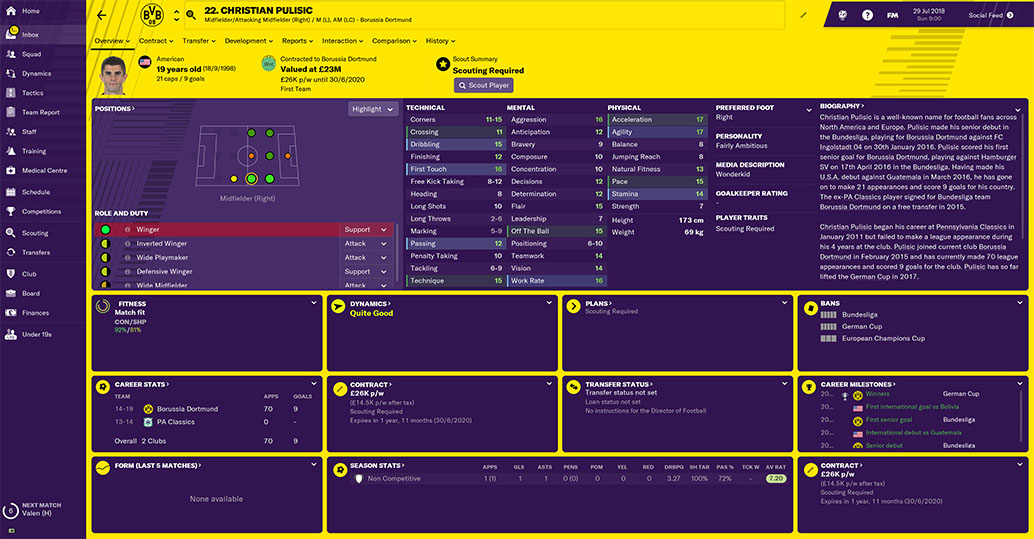 An industrious midfielder with excellent technical ability, McKennie has become something of a regular fixture in the heart of Schalke’s midfield over the past couple of seasons. Schalke boss Domenico Tedesco has used McKennie as an attacking midfielder, holding midfielder and even in the heart of defence so far this season which points to the 6’1” USA international’s versatility.

Schalke unusually find themselves in the lower half of the Bundesliga at this point in the season but have a talented squad at their disposal, having finished 2nd in the league last season. Their European endeavours are currently proving more fruitful as they lie 2nd in their group and are likely to progress to the next round of the tournament. 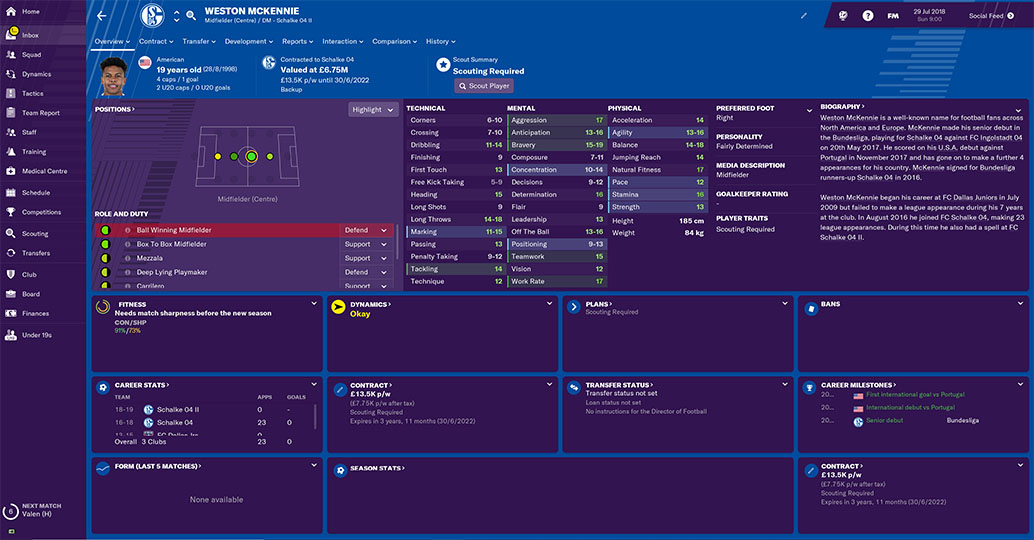 Brooks can be considered a Bundesliga veteran having broken through at his hometown club, Hertha Berlin, back in 2012. Brooks, the son of an American serviceman, went on to become the lynchpin of Hertha’s defence before joining VfL Wolfsburg in a €20 million deal in May 2017 – a record transfer fee for an American player. Brooks is a classic central defender – he’s strong, reads the game well and is highly competent when it comes to the key defensive tasks. However, what really justifies his lofty price tag is his exceptional raw pace and ability to pick a pass.

Wolfsburg are rebuilding after a difficult past few seasons. They currently find themselves 3 points away from the drop zone despite a reasonable start to the season which saw them pick up 9 points from their opening 6 matches. 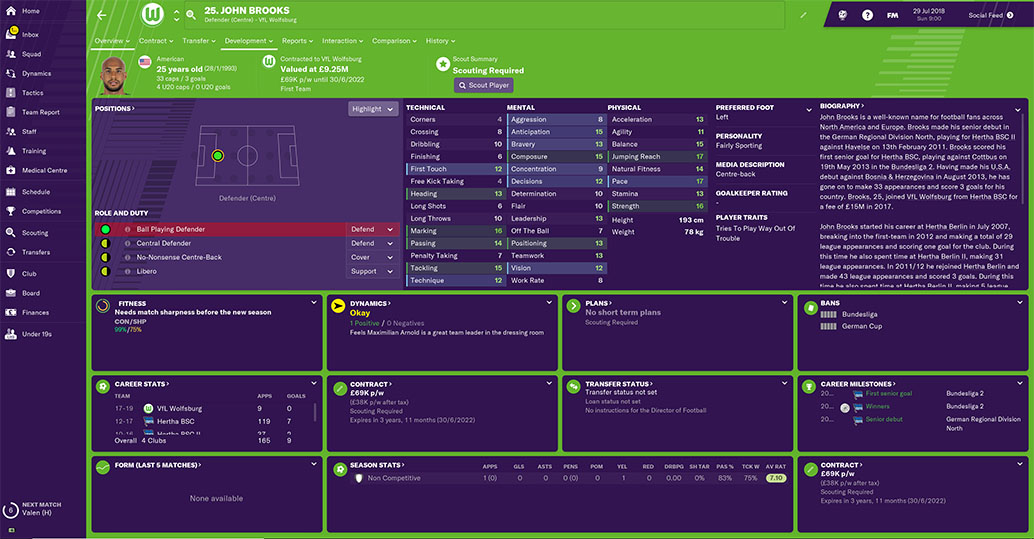 18-year-old Sargent has been in superb form for Werder Bremen’s reserve side scoring seven times in 11 appearances in the Regionalliga Nord. Sargent is an archetypal poacher, utilising his good first touch to create clear cut chances in front of goal. The expectation is that Sargent will make his first-team debut for Bremen later this season if he continues in his current vein of form.

Bremen are on the fringes of the European places in the Bundesliga. With a strong squad that has a good combination of youth and experience, Bremen could well find themselves well inside the top six at the end of the season. 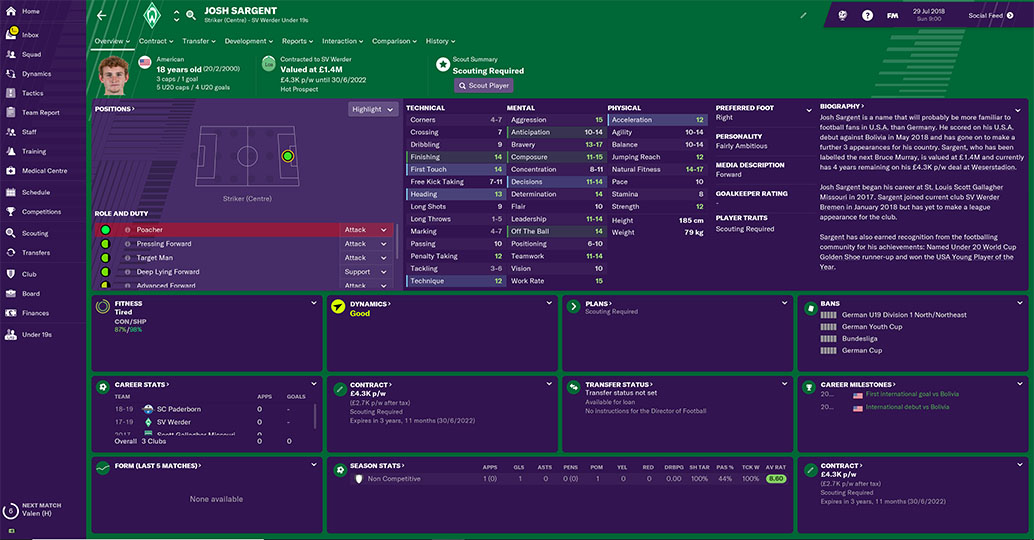 Johnson is a hugely versatile player who is comfortable playing virtually anywhere down either side of the pitch. He’s most naturally comfortable as a full-back where he can take advantage of both his pace and incredible work rate. Since joining Borussia Mönchengladbach he has been played higher up the pitch which has resulted in Johnson scoring more goals for Gladbach than at the rest of his clubs combined.

Gladbach are having a stellar season and currently occupy second place in the Bundesliga table. Their squad is packed full of talent and potential with experienced players such as Matthias Ginter, Yann Sommer and Lars Stindl lining up alongside future stars such as Denis Zakaria and Mickaël Cuisance. The fact that the club have racked up seven wins already this season speaks volumes for how successful this combination of youth and experience has been. 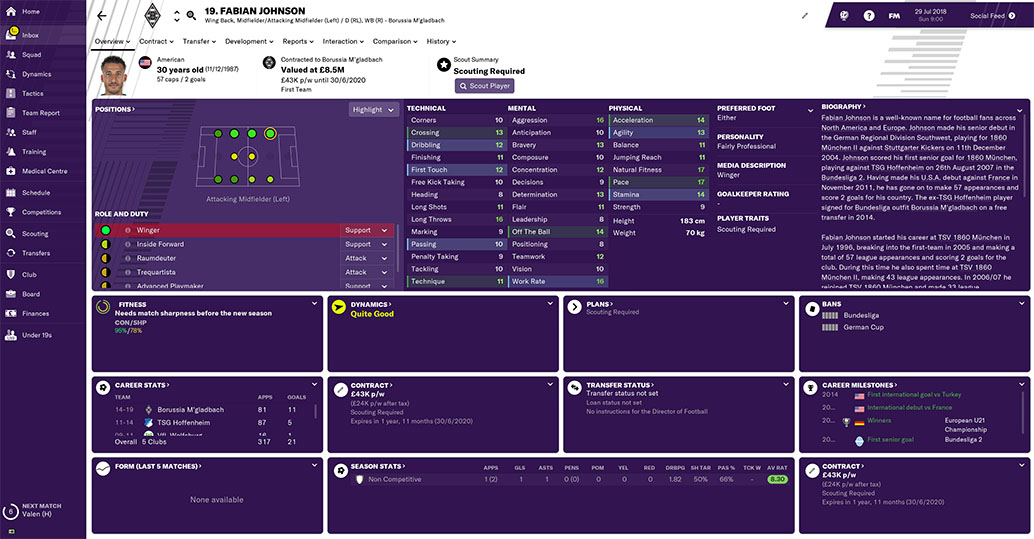 Wood has had somewhat of a nomadic career since leaving 1860 Munich back in 2015. He’s represented no fewer than four teams since then and is currently turning out for Hannover 96, on loan from recently relegated Hamburger SV. Wood has been ever-present for Hannover this season, scoring twice in a 3-1 win against VfB Stuttgart. His agility and quickness make him a difficult opponent for any defence and, with an optional future fee included in the loan deal, there’s every chance that his stay at Hannover might last a little longer than just this season.

Hannover are in their second successive season in the Bundesliga following their promotion from Bundesliga 2 in the 2016-2017 campaign. Whilst they’re expected to battle for safety, their shrewd summer transfer business suggests the club are taking positive steps to prolong their Bundesliga stay. 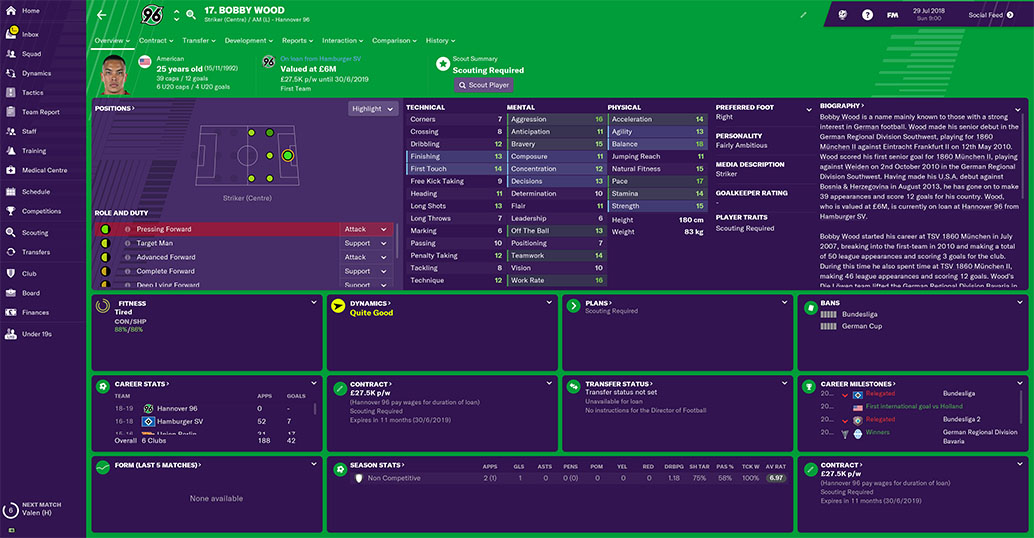