9 challenges you need to try on FM19

With the release of Football Manager 2019 just a few days away it’s time to start thinking about where you’re going to start your managerial career. Will you restore a sleeping giant to former glories or develop a squad of wonderkids and lead them into world beaters? Or maybe you’d prefer to go in a completely different direction and take a club from the bottom of the football pyramid on a journey to the very top of the game? The choice is yours, but before you decide here's 9 clubs we've hand-picked for inspiration. Will one of these provide the challenge or opportunity you’re looking for?

Bayer Leverkusen’s squad boasts a wealth of genuine wonderkids, making them one of the most exciting clubs to take charge of in FM19. There are potential superstars of the future throughout the team with Kai Havertz, Leon Bailey and Julian Brandt leading the attacking threat. It’s a similar story in defence with the presence of technically gifted central defenders Jonathan Tah and Panagiotis Retsos.

Your challenge as manager will be to develop this young squad to ensure that it achieves its maximum potential, and to build on their 55 points from last season which saw them finish 5th with Dortmund and Hoffenheim above them on the same tally. Could you even be the first Leverkusen manager to win the Bundesliga? 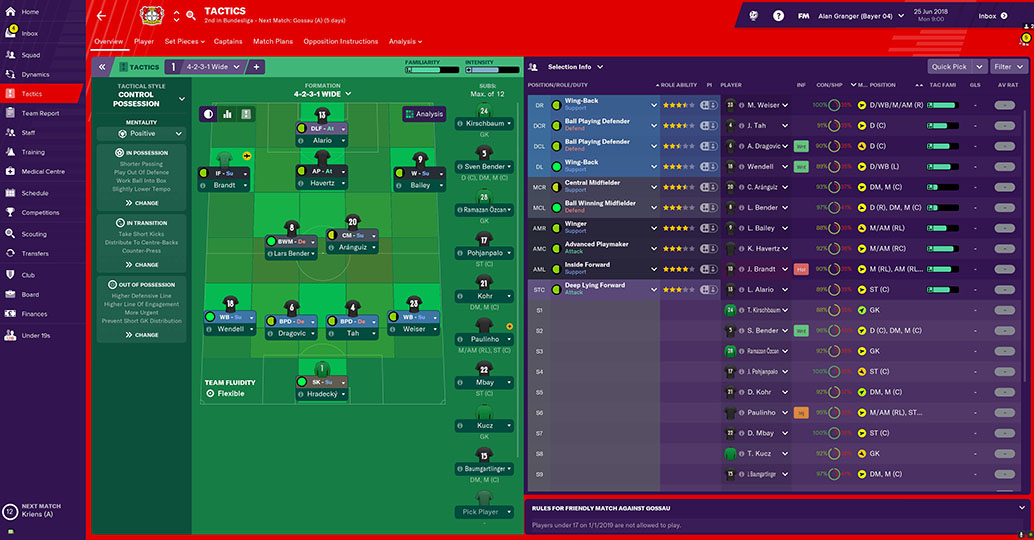 Last season saw PSV win their 24th Dutch title, thanks to some impressive performances from an exciting, attacking team. They strengthened their squad over the summer, adding Nick Viergever and Érick Gutiérrez, and have started this season with a 100% record in the Eredivisie, scoring goals for fun in the process - 38 in total, at the time of writing.

Perhaps most enticingly, their strike force features two players who will be instantly recognisable to Football Manager fans – Hirving Lozano and Maximiliano Romero. Can you take advantage of the talent at your disposal and add European glory to domestic domination? 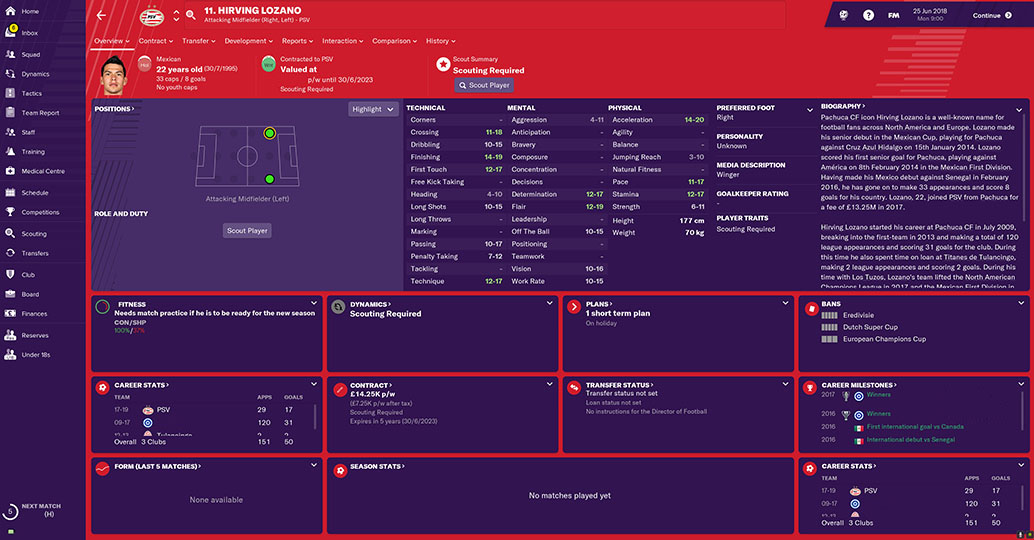 After a tumultuous few years that saw the original Parma re-founded as Parma Calcio 1913, the club is finally back in the top-flight of Italian football after three successive promotions from Serie D – a record in Italian football. The current squad features a mix of seasoned pros such as Gervinho and Bruno Alves as well as a host of promising loan signings including creative midfielder Alberto Grassi and talented striker Roberto Inglese.

Your first task as manager will be to keep Parma in the top-flight and then to restore the club to its former glories, making this an ideal candidate for a long-term save. 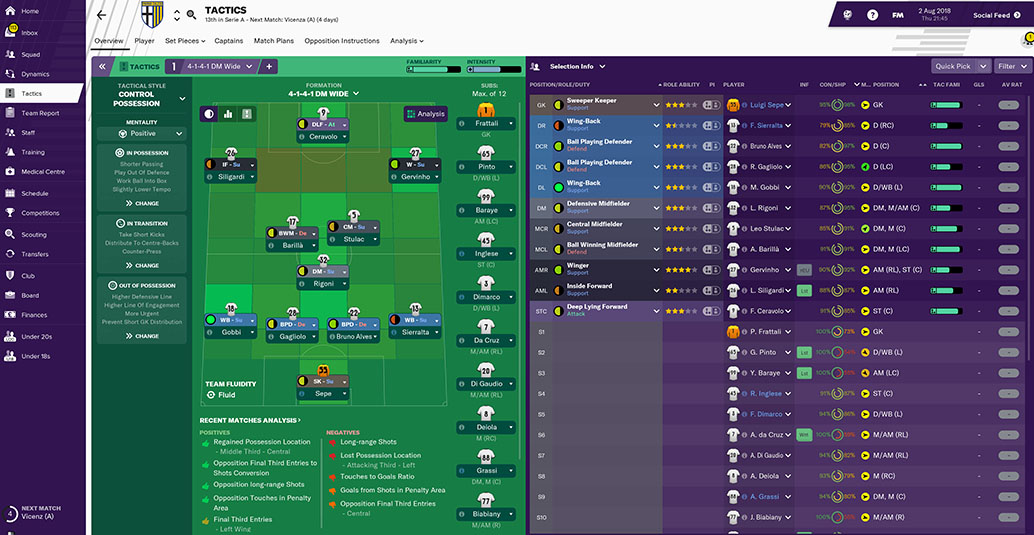 Much is expected of Sunderland in League One this season and the Black Cats currently sit third in the table, 3 points behind the leaders Portsmouth. Boasting a talented squad and a generous transfer budget, you'll have all the ingredients to make a return to the Championship at the first time of asking. There’s a good blend of players with top-flight experience – including Aidan McGeady and Lee Cattermole – alongside plenty of EFL experience in the shape of striker Charlie Wyke and on-loan midfielder Max Power.

The long-term aims are, of course, to bring top-flight football back to the Stadium of Light and with the backing of the club’s new owners that aim could be achievable in just a couple of seasons.

Dinamo have a rich history of producing wonderkids – with the likes of Luka Modric and Mateo Kovacic having comes through the club’s Academy. The latest star to roll off that production line is Ante Coric, who departed for AS Roma in the summer transfer window.

As you would expect, the current squad is littered with young players with high potential. Dominik Livakovic, Amer Gojak and Dani Olmo have all impressed this season and look likely to be the next crop of Dinamo stars. Can you bring the best out of them and build on Dinamo’s domestic success?

Roma have caught the eye over the past couple of seasons, playing an attractive brand of football that culminated in a European semi-final appearance last season. The club invested heavily in the summer, bringing in a total of 11 new players including highly sought-after youngsters Ante Coric and Justin Kluivert. The squad is now stacked with stars of the future, headlined by Turkish winger Cengiz Ünder, Czech striker Patrik Schick and local lad Lorenzo Pellegrini.

You’ll still have a decent chunk of transfer budget available to bring in one or two further additions, but even without that you have a squad capable of playing attacking football. In a highly competitive league, can you lead Roma to their first title since 2001? 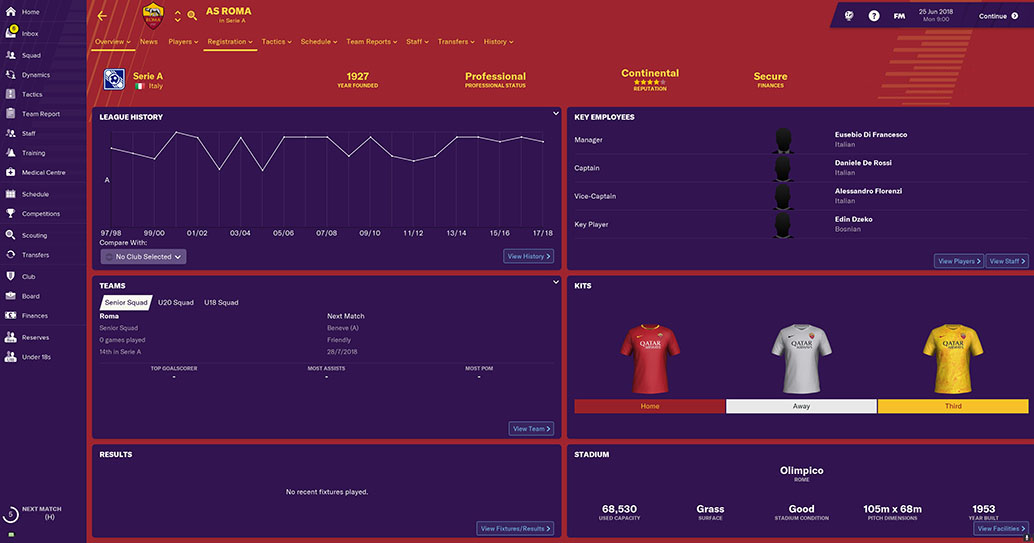 Sheffield United are enjoying a stellar start to the season, sitting at the time of writing on top of the Championship and looking set to build on their 10th place finish from last season. Proven Championship goalscorers David McGoldrick and Billy Sharp lead the team’s attacking threat while, at the back, John Egan and Jack O’Connell have proved themselves to be solid pairing.

The Blades also have some intriguing loan signings on their books including Oliver Norwood and Ben Woodburn, as well as a competitive transfer budget that should give you a chance of achieving promotion and returning the club to the top-flight.

If you’re the sort of manager that likes to roll their sleeves up and take a club from the bottom to the very top, then Spennymoor might just be the team for you. Despite having only joined the football pyramid in 2014, Spennymoor currently sit in the playoff places in the National League North – in only their second season in the league.

The bulk of Spennymoor’s squad in FM19 are capable of making the step up to National League level so you should be well-placed to mount a promotion challenge in your first season. After that, it’s down to your managerial nous to take them as far as you possibly can.

Since announcing the appointment of Steven Gerrard as manager back in May, there has been a renewed sense of optimism at Rangers. They’ve strengthened their squad over the summer transfer window, bringing in the likes of Allan McGregor, Scott Arfield and Conor Goldson as they look to improve on their third-place finish of last season.

There’s a reasonable level of depth to the squad which you’ll need in a league that, this season, has been the most competitive it’s been for years. Do you have what it takes to break Celtic’s grip on the Scottish Premiership and bring the title back to Ibrox?