The iconic DERBYSTAR ball has returned to German football, premiering in the Bundesliga and 2. Bundesliga this season. 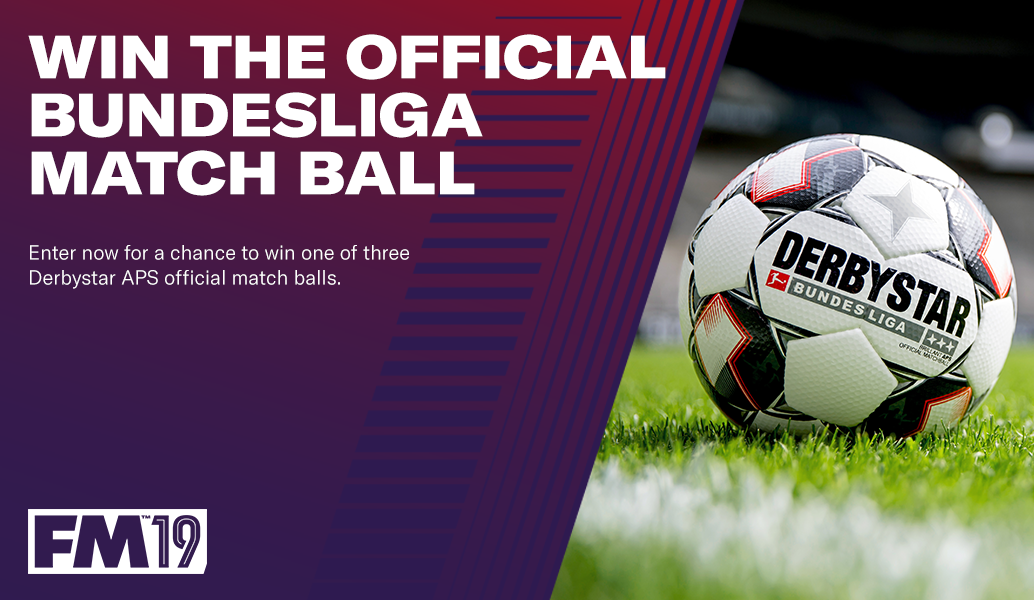 The ball integrates modern elements with sharp Bundesliga branding to deliver a sleek, traditional style. To celebrate Football Manager’s partnership with the DFL we’re giving you the chance to win one.

We have three DERBYSTAR APS official match balls to give away, and all you need to do is retweet the competition tweet below from @FootballManager to enter.

The three winners will be selected at random with the draw commencing at midnight (GMT) on December 3rd, so keep an eye on our Twitter account where we'll be revealing the winners.

The Terms and Conditions set out below apply, good luck.

This prize giveaway on Twitter (the “Promotion”) is administered by SPORTS INTERACTIVE LIMITED and SEGA EUROPE LIMITED (“SEGA” or the “Promoter”), a UK company and in compliance with UK laws; by entering you are agreeing to the following terms and conditions, as well as SEGA’s Privacy Policy.

This Promotion is in no way sponsored, endorsed or administered by or associated with Twitter. You understand that any posting by you made on the social media website Twitter (“Tweet”) shall be publicly available on Twitter’s website. Any additional personal information that you are requested to provide to SEGA as a participant or winner of the Promotion shall be controlled and processed by SEGA. Any questions, comments or complaints regarding the Promotion must be directed to SEGA and not to Twitter.

(1) Description of Prize Draws SEGA will award prizes via a random selection from all eligible entrants. Participants will need to either retweet the specific post and follow the account or reply to the daily Tweet which is posted by SEGA on the @FootballManager Twitter channel (“The Competition Message”). The Competition Message will provide details of (i) entry requirements (including but not limited to entry times for the Promotion (the “Promotion Period”), (ii) a description of the prizes (“Prizes”) and (iii) the number of Prizes available to participants of the Promotion. Entries submitted outside of the Promotion Period will not be considered.

(2) Eligibility. In order to be eligible for the Promotion, you must:

(i)  be a legal resident of USA, Canada any of the following European countries:

(ii)  be 18 years of age or older at the time of entry if resident in Europe, or be at least 13 years old and older than the minimum age for the PEGI or ESRB rating for the video game to which the Promotion relates (if applicable) and have obtained parental consent to enter the Promotion, and

The Promotion shall be void anywhere it is prohibited by law, irrespective of the eligibility requirements set out above. Any entrant who is not eligible for the Promotion can be disqualified at the Promoter’s discretion.  If proof of age is requested, and if satisfactory proof of age is not received, the Promoter reserves the right to choose another winner. Employees, officers and representatives (and members of their immediate families and those living in the same household of each) of the Promoter’s, its parent, subsidiaries, affiliated companies, advertising and promotion agencies, and any other company involved in the design, execution or production of this Promotion are not eligible.

This Sweepstakes is in no way sponsored, endorsed or administered by, or associated with Twitter. You are providing your information to Sponsor and not to Twitter.

Any entry, which does not comply with the rules, may be deemed invalid at the sole discretion of SEGA.

Twitter: If you do not have a Twitter account, create your free account at http://www.twitter.com. Message, data rates or other charges may apply if you are participating via the use of a smart mobile device; check your mobile plan for rates and details. Participation may not be available on all carriers. You must adhere to any rules and policies of Twitter when using your Twitter Account and entering any Promotion. Please see https://support.twitter.com/articles/18311. Twitter may take action against any entrants that violate its policies. SEGA takes no responsibility for the actions of Twitter, the Twitter site or the Twitter Account used by participants.

(4) Prize - Winners shall be randomly selected from all eligible entrants each day during the Competition Period. The number of winners who will be eligible to receive the Prize shall be specified in the Competition Message.

(ii) Promotor reserves the right to discontinue this Promotion at any time and without notice following the conclusion and complete fulfilment of all prizes associated with any given (and then current) Promotion.  In the event of a dispute regarding the identity of the person submitting the winning entry, the prize will be awarded to the authorised account holder of the submitted Twitter user account regardless of the individual who submitted the entry. The authorised account holder is the natural person who is assigned to the Twitter username. The Promoter reserves the right to void entries, which in its sole determination, are irregular or have been generated with abusive and/or duplicitous intent including but not limited to false or multiple Twitter user accounts.

(iii) By entering, you (a) agree to comply with and be bound by the official rules and the decisions of the Promoter which are final and binding in all respects; (b) agree to release Promoter, Twitter and its employees and agents from any and all liability, loss, damage or injury resulting from participation in this Promotion or from the awarding, receipt, possession use and/or misuse of any prize; (c) acknowledge that the Promoter, Twitter and its employees and agents have neither made nor are in any manner responsible or liable for any warranty, representation, or guarantee, express or implied, in fact or in law, relative to any prize including, but not limited to, its quality, mechanical condition or fitness for a particular purpose; and (d) consent to the use of your Twitter name and any other information requested by the Promoter (including but not limited to photograph and/or likeness, statements and voice) for advertising and promotional purposes in all media worldwide and in perpetuity without additional compensation, unless prohibited by law.

(iv) The use of machines, computers or any automated technique ("Automated Cheats") to enter the Promotion is prohibited. SEGA has the right to invalidate any entry if its sole opinion the participant has engaged the use of Automated Cheats at any time.  All decisions of SEGA are final.

(v) SEGA and Twitter are not responsible for any lost, late, delayed, misdirected, garbled, illegible, incorrect or inaccurate information or entries that are misdirected or misrouted as a result of interrupted or unavailable network connections or internet transmissions for any reason, or any failure of the website during the Competition Period, or for any computer, phone, phone line hardware or software malfunction, failure or error of any kind, whether mechanical, human or electronic. Any attempt by an entrant to interfere with the operations of this Promotion is a violation of criminal and civil laws; SEGA reserves the right to seek damages from any such entrant to the fullest extent permitted by law. If, for any reason, any Promotion is not capable of running as planned, including, without limitation, infection by computer virus, bugs, tampering, unauthorised intervention, fraud, technical failures, or any other causes beyond the control of SEGA or Twitter which corrupt or affect the administration, security, fairness, integrity or proper conduct of the Promotion, SEGA reserves the right at its sole discretion to cancel, terminate, modify or suspend the Promotion and select winners in a random drawing from among all eligible entries received prior to the cancellation. All entries (and the content therein) are the property of the SEGA.

(vi) Entrants agree that they may be required to take part in publicity without further consent or payment. Such publicity may include the public promotion of their names and/or likeness, including but not limited to their Twitter account username and use of any Tweets provided to the @FootballManager Twitter channel.

(6) Release: BY PARTICIPATING IN THIS PROMOTION, YOU RELEASE AND HOLD SEGA AND TWITTER,  THEIR PARENT COMPANY OR COMPANIES, SUBSIDIARIES, AFFILIATES, DISTRIBUTORS, RETAILERS, ADVERTISING AGENCIES AND EACH OF THEIR RESPECTIVE EMPLOYEES, OFFICERS, DIRECTORS, SHAREHOLDERS, AGENTS, AND REPRESENTATIVES, HARMLESS FROM AND AGAINST ANY AND ALL LOSSES, DAMAGES, CLAIMS, AND ACTIONS OF ANY KIND ARISING IN CONNECTION WITH THE PROMOTION OR RESULTING FROM ACCEPTANCE, POSSESSION, USE OR MISUSE OF, OR DEFECTS IN, A PRIZE, OR PARTICIPATION IN THE PROMOTION, WITHOUT LIMITATION CLAIMS BASED ON PROPERTY LOSS OR DAMAGE, PUBLICITY OR PRIVACY RIGHTS, AND/OR DEFAMATION. NOTHING IN THESE TERMS SHALL EXCLUDE OR LIMIT THE PROMOTER’S OR TWITTER’S LIABILITY FOR PERSONAL INJURY OR DEATH CAUSED BY ITS NEGLIGENCE.

(7) Law and Jurisdiction: These terms are governed by English law and any claim or matter arising out of these terms shall be subject to the jurisdiction of the courts of England.

(8) Data Protection: In order to participate in the competition, participants may need to provide certain information on themselves, such as the participant’s name, email address and country of origin. Your entry may also contain certain personal data (e.g. Twitter handles or usernames, Steam ID etc.) and you may be required to submit a photograph or video of yourself if this forms part of the entry requirements for the Promotion. Winners of the Promotion may be required to provide their full address for the purpose of SEGA delivering any applicable Prizes (together, “Personal Data”).

This Personal Data is collected and processed only for the purposes of organising, running, and monitoring the Promotion, as well as for carrying out publicity activities relating to the Promotion and SEGA promotions in general. By entering this Promotion, participants agree  that they have read and understood SEGA’s Privacy Policy (http://www.sega.co.uk/Privacy), and any privacy policy which applies for Twitter (for which SEGA is not responsible) and agreed to be bound by any other requirements set out in the Competition Message, which may be amended or varied at any time by the Promoter.