Four weeks ago, 54 EFL clubs and their virtual managers came together for the inaugural EFL Football Manager Cup. By Saturday 16th May, only four sides remained. Over the course of two dramatic live streams, featuring a tense local derby, two great comebacks, last-minute winners and a nail-biting penalty shootout, Brentford fan Sam Jacques led his side to glory.

Like most of you, we were missing our regular football fix, so this tournament was set up to try and keep people entertained. The tournament was run in conjunction with the EFL and their charity partner Mind, the mental health charity, who are doing great work to support everyone who may be struggling during these challenging times. 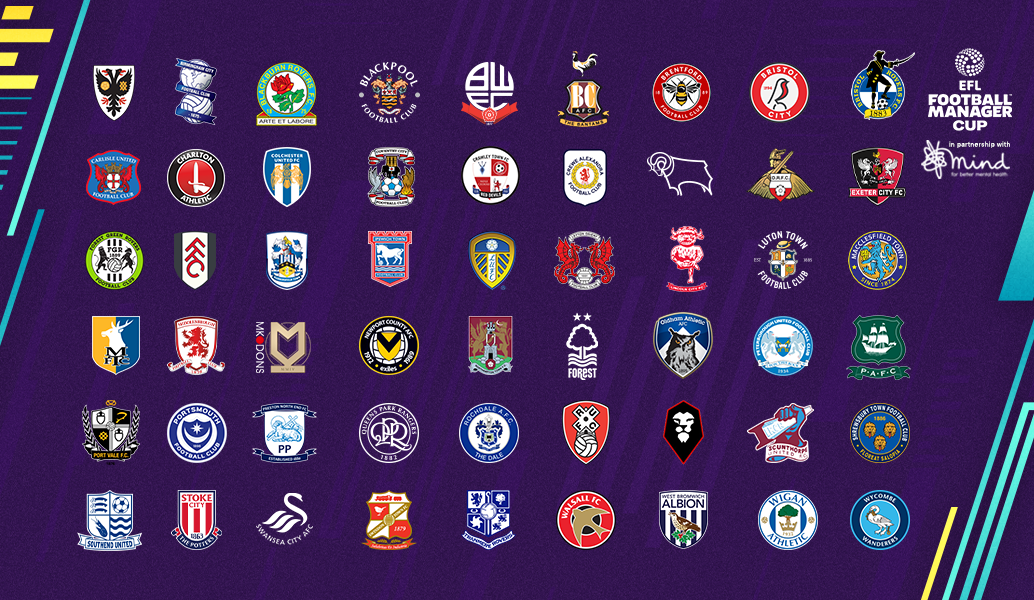 The tournament brought together a great assembly of virtual managers, from professional footballers Joe Lolley, Romaine Sawyers, Lee Camp and Karlan Grant to actors, club staff members, content creators, FM researchers, fans and even a former England international rugby player. We had derbies, upsets and a 10-1 thrashing on route to the semis, where Swansea City, Nottingham Forest, Fulham and Brentford remained.
If you want to check out the action from the final three games in the competition, head over to our Twitch channel.

Forest played Swansea in the first of the two semis, with Swansea taking the lead on 22 minutes thanks to a low finish from Rhian Brewster. Tricky Swans winger Bersant Celina was sent off for a foul in the Forest box four minutes later and it didn’t take long for Forest to make their man advantage count, Tobias Figueiredo finding the back of the net from a set-piece to make it 1-1 at the break.

Both sides had their chances in the second 45, with Forest bossing possession but Gareth Richards’ Swans proving dangerous on the counter. Just as it looked as though Joe Lolley’s men were facing extra time for the third consecutive game, Swansea defender Joe Rodon, who scored the club’s first goal in the competition, tapped home at the back post from a free-kick to leave Lolley crestfallen.

Thank you for having me @FootballManager and remember it’s all for the great work that @MindCharity do! I’m sorry I could make a City’s dream come true but we give it our best. pic.twitter.com/OmrTAKXnnL

The other semi-final, between West London rivals Fulham and Brentford was even more frenetic. Fulham prided themselves on their ‘medieval football’ in the earlier rounds but they were dominant in the first half and it was only the heroics of Bees keeper David Raya that prevented the Cottagers from adding to Ivan Cavaleiro’s 29th minute opener.

Aleksander Mitrovic made it 2-0 on the hour mark, stepping up to score the penalty after he was tripped by Pontus Jansson in the area. That challenge earned the Swede his second yellow of the game, leaving Jacques’ Brentford down to 10 men with half an hour remaining. In an incredibly bold tactical move, the Brentford gaffer left his side with only central defender, instead opting to bring on Tariqe Fosu as he went with two up top in pursuit of a dramatic comeback.

Somehow, it worked. Just three minutes later, Ollie Watkins rolled home from a Nikos Karelis pass to make it 2-1. Then the magic happened. Fulham pressed from the restart, only for Brentford to regain the ball on the edge of their own box. Dalsgaard played the ball to Watkins, who ran from inside his own half, evading a couple of challenges before firing the ball past the Fulham ‘keeper to make it 2-2.

Brentford had to ride their luck in the final 20 minutes, with Fulham exploiting the increased space in their opponents’ backline, but Raya again stood firm, saving from Mitrovic, Aboubakar Kamara and Cavaleiro. Just as it looked set to go to extra time, there was another twist in this most unconceivable of tales. Ethan Pinnock rose highest to meet Fosu’s corner, giving Brentford the lead and shattering Fulham’s dreams.
That left us with two evenly matched sides for the final of the inaugural EFL Football Manager Cup. Two clubs packed full of young, exciting talent managed by passionate fans who understood the game and had great tactical nous to boot.

Brentford created more chances in the early going but they once again found themselves behind, Conor Gallagher showing great composure to fire into the bottom right corner after a delightful cross-field ball. This time Sam Jacques’ men responded almost instantaneously, Emiliano Marcondes getting the ball over the line after a well-executed set-piece routine.

The Bees continued to pepper Freddie Woodman in the Swansea goal, but neither side could find the net again during the 90 minutes, forcing us into extra time. Watkins, the semi-final hero for Brentford, missed two great chances in the additional half hour as both clubs headed into the dreaded lottery of penalties.
Brentford had already won one penalty shootout in the competition, seeing off Shrewsbury Town in their opening game, and they had the advantage of going first in this one; Marcondes getting them off to the perfect start.

Both teams were perfect from the spot until Andre Ayew saw his effort saved by Raya. Advantage Brentford. With the next three takers all scoring, Ollie Watkins had the chance to make himself a hero. His effort was saved expertly by Woodman, with Aldo Kalulu doing what he couldn’t to make it 4-4 and take us into sudden death.

Dalsgaard scored for Brentford to put the pressure back on Swansea and their goalscorer Gallagher. The young midfielder’s effort was tame though, fired straight down the middle into the welcoming arms of Raya, sparking jubilant scenes among the (virtual) Brentford fans, coaching staff and players.

Congratulations to Sam and Brentford on their victory and commiserations to Gareth and Swansea, who played fantastically well throughout the competition and on another day, as they say, it could have been very different.

54 teams entered this competition 4 weeks ago and today we crown our champion - @_samjacques ?#FM20EFLCup pic.twitter.com/TTAqw5xsCc

We’d like to thank all the clubs for the cooperation throughout the tournament in helping make it such a success and for spreading the word about our fundraising efforts for Mind, the mental health charity. Scott Minto, Joe Lolley and Adam Armstrong have all given generously to the cause, while our studio director Miles Jacobson has recently donated £5,000. The JustGiving page is still live, so please give whatever you can to support this wonderful cause safe in the knowledge that we’re with you, every step of the way.

We’d also like to thank everyone for following the action from the EFL Football Manager Cup - we hope it has given you some entertainment and light relief during these challenging times for us all.