The remaining eight teams in the inaugural EFL Football Manager Cup enter the quarter-finals knowing that just three more wins will secure them the title. The next stage of the tournament, which is being run in partnership with the EFL and their charity partner Mind, will see two games played on Tuesday 12th May and two games on Wednesday 13th May. 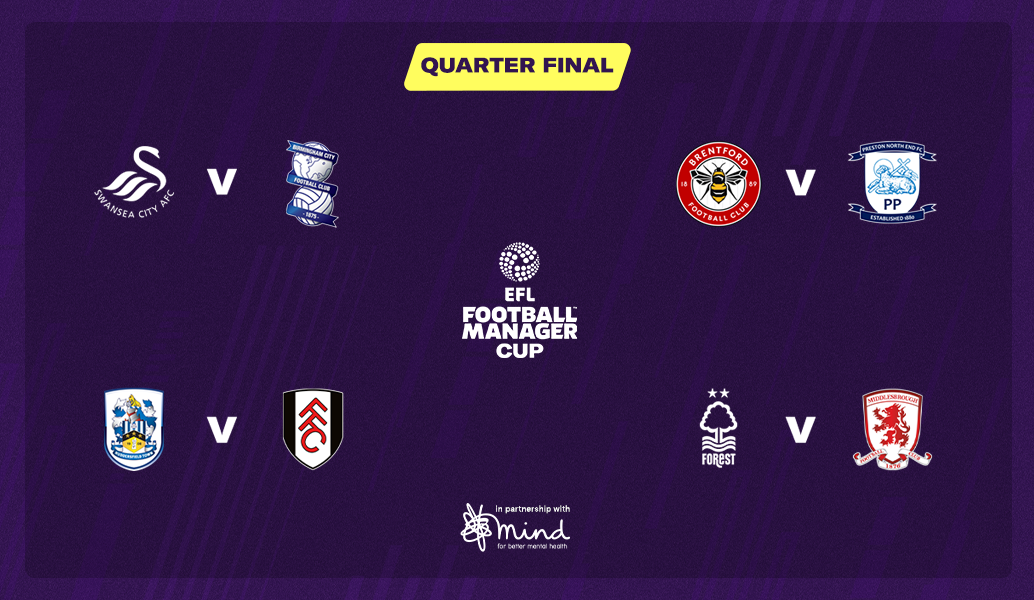 After coming through a tie for the ages against League Two outfit Mansfield Town, which saw three red cards, a hatful of disallowed goals and a dramatic penalty shootout, Nottingham Forest’s reward is a tie against Middlesbrough in the final game of the round. Joe Lolley admitted that his side were given a “tactical masterclass” by the Stags in the last 16 and he’s likely to have had his side working hard on the training ground in preparation for Wednesday’s game. The big question for Lolley will be whether to keep himself in the starting XI after a particularly ineffective showing against Mansfield.

Neil Trewick’s Boro have gone somewhat under the radar in this competition after facing League One opposition in their opening three games but six goals from Britt Assombalonga and a strong team work ethic makes them both dangerous offensively and tough to break down at the back.

The opening quarter final will see Gareth Richards’ Swansea, the only side to have kept three clean sheets thus far in the competition, host Lee Camp’s Birmingham City. Swansea may have only beaten Wigan by a single goal in the last 16 but they look like a well-oiled machine and they could cause the Blues problems on Tuesday evening. For their part, Camp’s men have come on strongly since their near-miss against Swindon in round one, putting five past Forest Green and then getting past Luton thanks to a hat-trick from central defender Harlee Dean; this tournament really has had it all.

Karlan Grant’s Huddersfield Town entered their last 16 tie with Bristol City as underdogs after huffing and puffing against Oldham Athletic and Walsall in the opening two rounds but they produced a much-improved display to win 2-1 and they’ll now face Fulham. Charlie Cooper’s ‘medieval’ football is not the easiest on the eye but it’s producing results, as shown by their 2-1 win over a spirited Wycombe in the last 16. Although a meeting between the tournament’s two lowest scorers may not look that exciting on paper, fans should expect a close game that could be decided by one moment of magic. Will Charlie Cooper’s men once again rely on their set-piece prowess or will Grant’s men continue their upward trajectory into the last four?

Brentford needed penalties to avoid an upset against Shrewsbury Town in the last 32 but they were much better in the round of 16, comprehensively beating local rivals QPR 3-1. While Pontus Jansson and Said Benrahma were both injured in that West London derby, competition rules mean that Sam Jacques will have a fully-fit squad to choose from for their meeting with tournament top-scorers Preston North End in the quarters.

Preston have been the competition’s most impressive side thus far, scoring 16 in their opening three games and producing an assured and confident display to dump out local rivals Blackburn Rovers in the last round. Although virtual manager James Moulding admits that Brentford were “the only side [he] wanted to avoid”, the Lilywhites are still the side to beat in this competition.

Catch up on all the best goals and social reaction so you're up to speed before the drama continues in the Quarter Finals...

Don’t forget, during the tournament you can show your support for Mind and help them protect, support and save lives by donating what you can at the tournament’s JustGiving page.

The quarter-finals will be taking place on Tuesday and Wednesday of this week. Make sure to follow our social channels and check our website for updates on all the action.