54 teams started in the EFL Football Manager Cup almost a month ago with the same ambition: glory. 50 matches and a multitude of dramatic moments and classic interviews later, only four sides still have a chance of lifting the virtual trophy – Nottingham Forest, Swansea City, Brentford and Fulham.

All four clubs were Championship play-off contenders before the lockdown came into effect and it really is too hard to call who will go all the way going into the final three matches.

The semi finals of the tournament, which is being run in partnership with the EFL and their charity partner Mind, will both be played and streamed through the official Football Manager Twitch channel on Saturday 16th May. 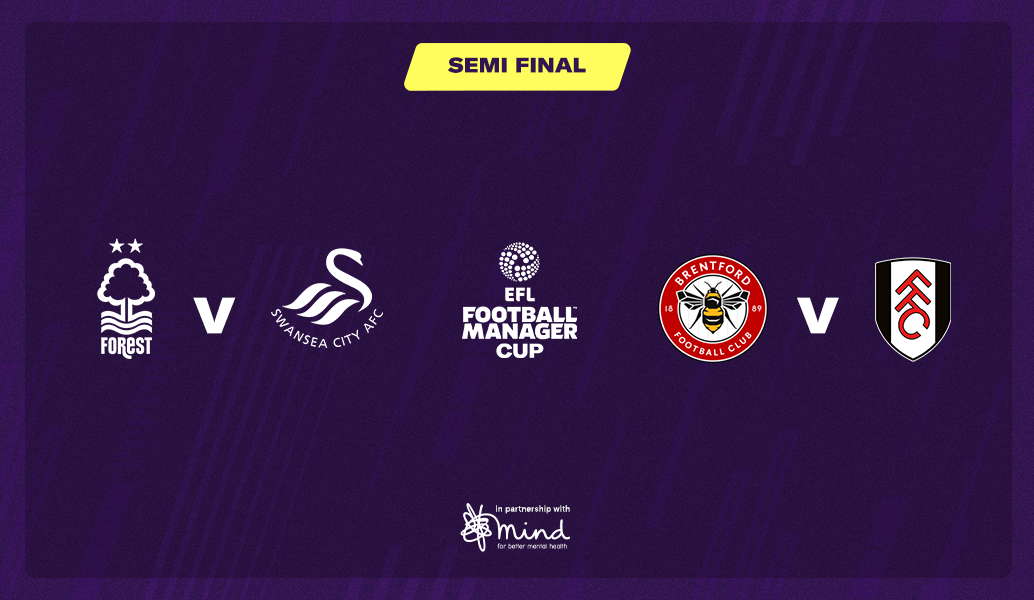 Swansea City made the last four after a highly dramatic 4-3 win over Lee Camp’s Birmingham City that saw the Swans take the lead twice, trail 3-2 and require a 94th minute howitzer from Player of the Match George Byers to progress. Although clinical in front of goal, Gareth Richards’ men entered the game as a side famed for their defensive qualities after keeping clean sheets in all three fixtures before the quarters. They were, however, a little defensively suspect against the Blues, conceding 13 shots on target in the 90 minutes. You’ve got to expect that Richards will have had the lads working hard on the training ground ahead of their semi final with Joe Lolley’s Nottingham Forest.

It wasn’t quite as nail-biting as their classic with Mansfield in the last 16 but Forest needed a bit of luck and extra time to see off Middlesbrough’s challenge in the last eight. Virtual Forest boss Lolley has noted that he personally doesn’t quite fit in the formation he wants to play and the competition for places in the Forest midfield continues to be heat up, with Tiago Silva named Player of the Match in the last game, Ben Watson posting another impressive display (despite his penalty miss) and John Bostock getting his first goal of the tournament off the bench to seal their progress.

The other semi will see a second West London derby of the tournament for Sam Jacques’ Brentford, who face Charlie Cooper’s Fulham. The Bees needed penalties to get past Shrewsbury Town in the last 32 but they’ve gone from strength to strength since then, beating QPR 3-1 and the tournament’s top scorers Preston North End 3-0 in the quarters. It appears that university student Jacques is finally getting the most out of the bevy of young, attacking talent at his disposal, even if his ‘keeper David Raya was awarded Player of the Match in the victory over Preston.

Fulham produced perhaps the most surprising performance of the quarter finals as Cooper’s side, who pride themselves on their ‘medieval football’ and only scoring enough goals to win the game, put five past Karlan Grant’s Huddersfield. Ok, they scored three in the second half after Jonathan Hogg was sent off, but they did lead 2-0 at the break thanks to set piece goals from Tim Ream and Michael Hector. To double your goal tally for the whole tournament in 90 virtual minutes is impressive stuff in anyone’s book.

Cooper has surprised some with his team selections thus far, Harrison Reed, Harry Arter and Kevin McDonald preferred to Cottagers captain Tom Cairney in the heart of midfield for example, but it’s hard to deny that it’s worked. Brentford struggled a bit with Shrewsbury’s physicality and they could be in for a long afternoon if Cooper’s men are able to work their set-pieces and get an early goal, especially as the Fulham gaffer has been willing to clog the midfield and slow games down in the closing stages.
You can catch up with all the action from the quarter-finals on our website.

Don’t forget, as we approach the end of the tournament you can show your support for Mind and help them protect, support and save lives by donating what you can at the tournament’s JustGiving page. 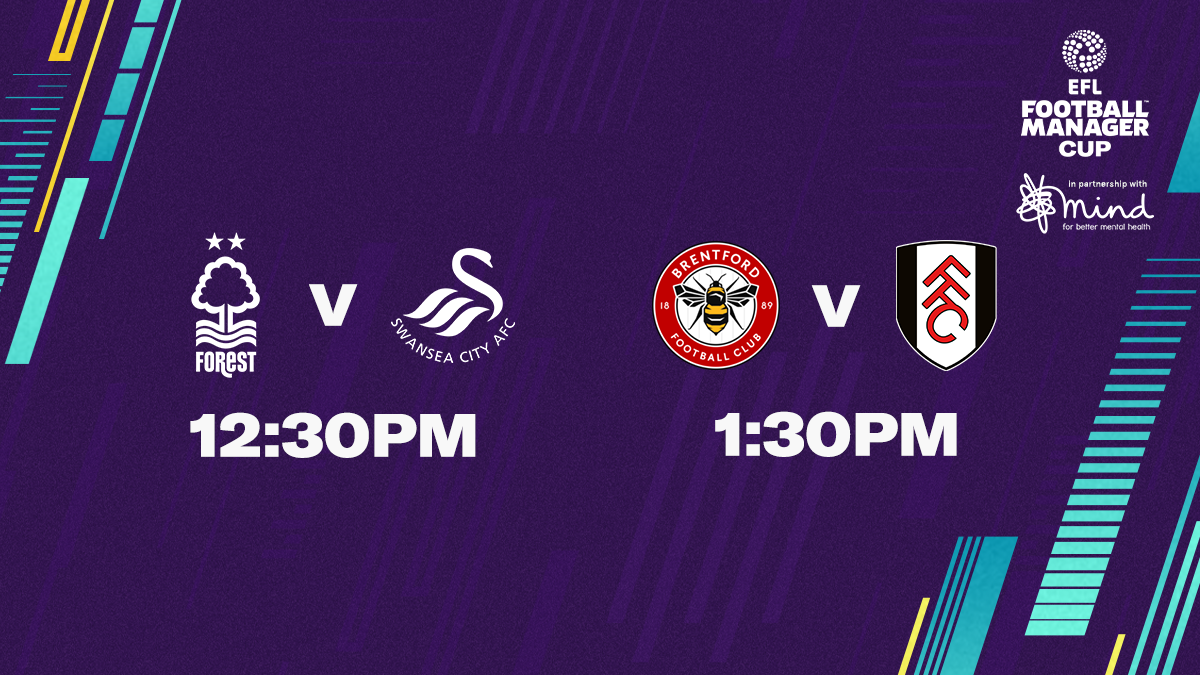 The semi-final action will be streamed on our Twitch channel on Saturday at 12:30pm and 1:30pm and the final will take place at 3pm on Sunday. You can keep up to date with everything EFL Football Manager Cup related by following us on social media.