How Will the Sky Bet EFL Tables Look at the End of the Season?

This weekend marks the five games to go point of what has been another Sky Bet EFL season packed full of surprises, intrigue and drama. There’s everything still to play for with title races, Sky Bet playoff spots and relegation battles still to be decided across all three EFL leagues. 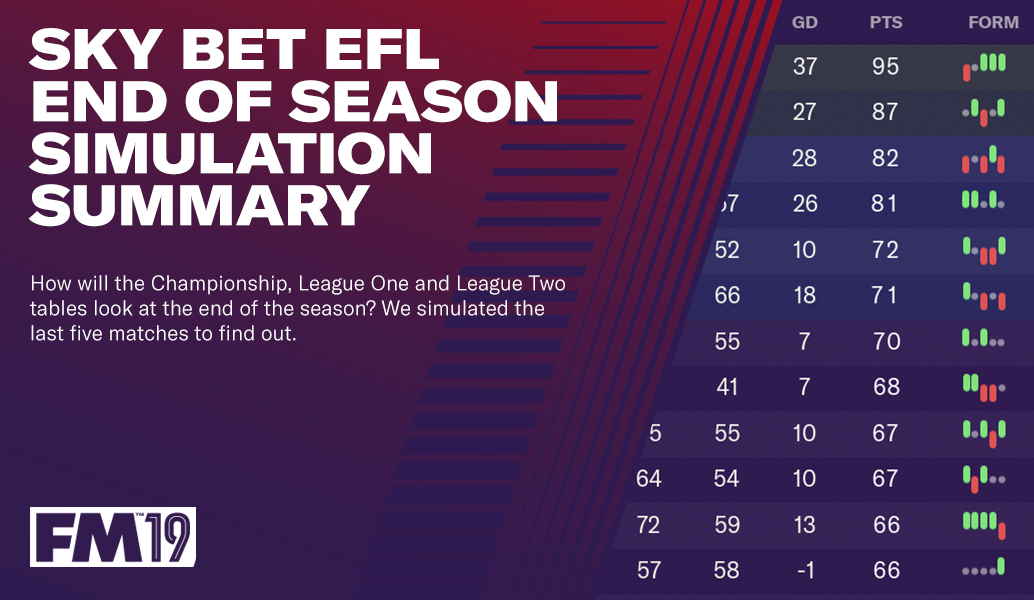 Taking the league tables as they currently stand, we simulated the remaining fixtures across the Sky Bet Championship, League One and League Two to see how those tables might look come the end of the season; which teams will be celebrating and who will be drowning their sorrows come May 6th. Here’s how everything panned out…

A thrilling Sky Bet Championship season ends with Norwich crowned as champions after an impressive campaign that earns them a return to the top flight after an absence of three seasons. The Canaries remain unbeaten across their final five fixtures to finish eight points clear of the chasing pack. In a rollercoaster battle for second place, Leeds edge out their Yorkshire rivals Sheffield United after picking up eight points from their last five games. Despite finishing the season with a patchy run of form Blades fans can still feel optimistic heading into the Sky Bet playoffs after their third-place finish.

Joining Sheffield United in the playoffs are West Bromwich Albion, Bristol City and Aston Villa. West Brom can be considered the form team heading into the post-season after racking up three wins from their five remaining fixtures.

At the bottom of the table Bolton, Ipswich and Rotherham are unable to haul themselves out of the relegation zone and will be playing in Sky Bet League One next season. Ipswich do show some form over the last five games but are unable to lift themselves off of bottom spot.

The battles at the top and bottom of Sky Bet League One have been incredibly tight for much of the season and it’ll stay that way at the end of the campaign too. Luton claim top spot and the Sky Bet League One title after a superb season that ends with them five points clear of their rivals. Sunderland seal second place after remaining unbeaten across their last five matches.

The teams contesting the Sky Bet playoffs are Portsmouth, Barnsley, Charlton and Doncaster with a dramatic playoff tournament in prospect. All four sides come into the post-season with somewhat patchy form meaning it’s difficult to name a clear favourite for the final promotion spot.

The bottom half of the table has been tighter than in almost any season in recent memory with every team from 13th position down in a battle to ensure their League One survival. Come the end of the season it’s delight for the likes of AFC Wimbledon, Rochdale and Wycombe but despair for Scunthorpe, Walsall, Southend and Bradford City who will find themselves in Sky Bet League Two for the 2019/20 season.