With the excitement of the EFL playoffs ramping up, we’ve decided to simulate the outcome of the respective finals on FM19 to see which team can achieve the glory of promotion. 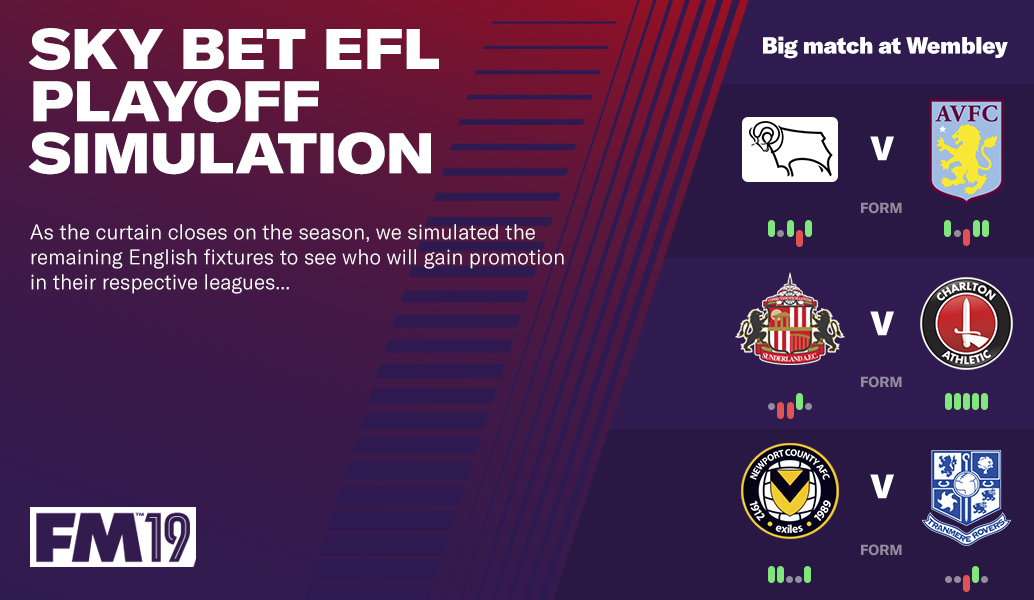 Taking current systems and personnel from each of the six clubs we played through the three finals to put our simulation to the test. In the most tense, dramatic and exciting game that football can throw up, who will hold their nerve to win promotion?

Lampard’s men did well to overcome Leeds in the Semi Final comeback, but the momentum gained from the second leg wasn’t enough to take them up. The Villains secured their top-flight status for the first time since 2016 with a goal in each half, one from top scorer Tammy Abraham, followed by Albert Adomah who came off the bench to wrap it up in the dying minutes.

Man of the match was awarded to Tyrone Mings, the defender who’s shifted to centre back under Dean Smith’s management. Mings made two key passes from the back, winning 100% of his tackles and 80% of his headers, a complete performance from an all-round defender.

Charlton got to Wembley after a dramatic win in a penalty shootout against Doncaster Rovers in the second leg at The Valley, but their luck from the spot ran out here.

Finals can often make for cagey affairs and that was very much the case here. Despite Sunderland looking the most dangerous with seven shots on target, the possession was split almost evenly with both keepers looking hard to beat.

When a game is so tight it seems harsh to separate teams via a shootout, with so much of it coming down to sheer luck. But confidence plays a big part in penalties too and the Black Cats dispatched their four expertly.

Here, Sunderland bounce straight back into the Championship in a bid to reverse their slide of recent seasons.

While the EFL Championship and League One Play Off Finals proved to be tight affairs, the League Two encounter between Newport and Tranmere didn’t follow suit.

The Welsh side opened the scoring in the 37th minute and didn’t look back, adding a second and third without reply. Any hopes of a comeback for Tranmere after their 85th minute goal were quickly dashed when they conceded a minute later.

Midfielder Josh Sheehan shone the brightest, scoring twice and setting up another - just look at that 9.3 match rating. A Newport County victory at Wembley ensures promotion to League One for the first time in the club’s history. It’s been quite a rise… the perfect Football Manager story.