Building-up Possession and Playing Out From The Back in FM22

In an ideal world, we’d all love our teams to play a dynamic, possession-heavy style driven by a patient build-up from the back. That idealised image of Total Football, of attacking with maximum width and then making the pitch as narrow as possible when transitioning to defensive actions, captivates most Football Manager players.

Ihor Crusadertsar explains his concept of the ‘Mentality Ladder’ and how understanding and mastering it is one of the first steps in creating a successful possession football tactic in FM22. 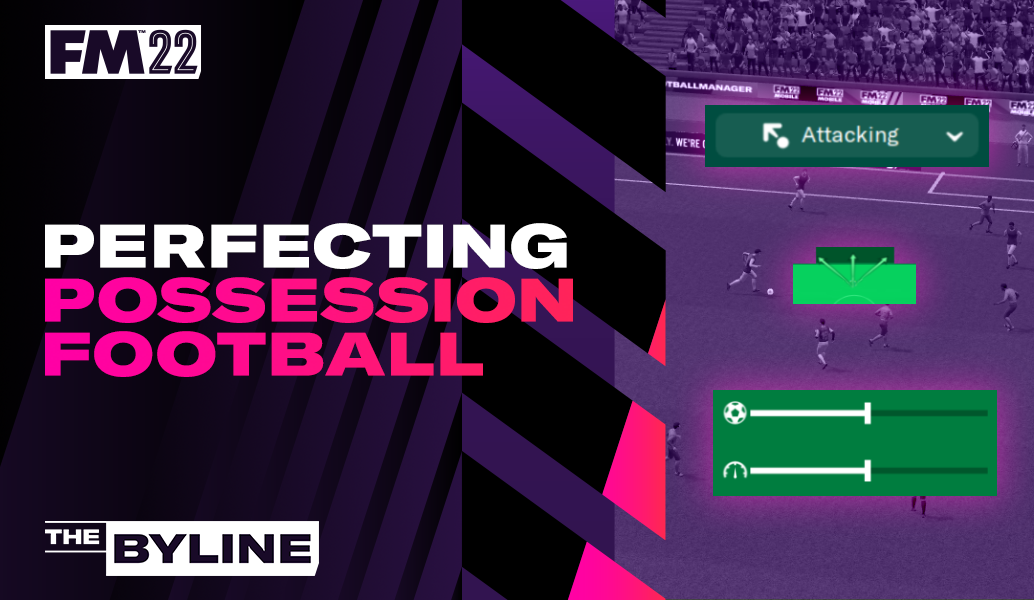 Problem with being too cautious

It is no secret that with a low (e.g. Cautious) team mentality, defenders tend to play it safe. This often means booting the ball upfield and away from danger near your penalty box. This makes sense when your intention is to play cautiously and defensively but it is definitely not what we want when trying to build from the back.

However, this happens all the time in FM. Even when using a Positive mentality. If you are new to the game, you might not realise what you are doing wrong. It can be very frustrating when you see this happen time and again, especially because when you read the in-game description for positive mentality and it seems perfect for possession-focused style like Total Football.

Patiently probe. Maintain possession. These are central to the implementation of a possession football approach and that's exactly what the description suggests. However, you cannot just take this at face value – team mentalities affect different positions in different ways. By setting it to Positive for the whole team, it does not mean that all of your players will operate with this mentality. While it is true that player mentality relates to the team mentality, the link is not direct. Defenders and players with Defend duty will always operate on the lower mentality level from the general team mentality. For example, even on Positive team mentality, your central defenders will operate with a Cautious individual mentality. A little bit of pressing pressure from opposition can make them go into defensive mode and look for ways to clear the ball to safety, sometimes with no option but to boot it long over your midfielders.

Importance of Roles and Duties

As counter-intuitive as this may sound, Ball-playing Defenders are not ideal roles for when you want to have a lot of possession and patiently build from the back. This is especially true if you use more than one in your backline. Their role description says it all – they will look to thread balls through and set-up counter attacks, rather than recycling to their teammates as part of a gradual advance.

Personally, I would only use this role with a truly special player capable of making those ‘Hollywood’ passes on regular basis. That is a player with elite-level Passing, Vision and Decisions attributes. If you do not have such a player, then why not opt for a simple Central Defender? They will make simple short passes towards your midfielders and avoid the much riskier long ones, allowing you to better retain possession. In this instance, a Central Defender on Cover would suffice, especially if you’re looking to use a back three, as I am in this example, with Wide Centre-Backs who will be more adventurous in how they progress the ball.

There are several ways to set up an effective back three in a progressive possession system. However, the most important thing to remember is balance. If your tactic asks two of your defenders to move aggressively forward with the ball, then the third needs to be more conservative to preserve the defensive integrity of the formation and cover the movement of their teammates. 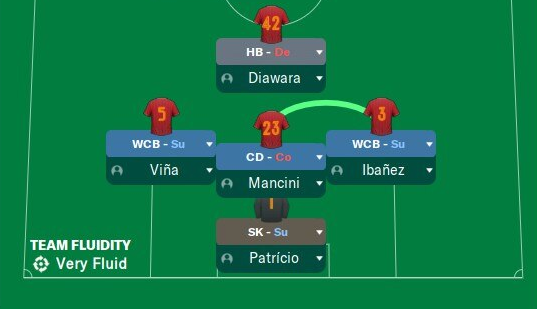 Such a set-up does not need to be symmetric. For example, if your most creative, mobile players are your Central Defender and left Wide Centre-Back, it’d make sense to set the left wide-centreback with a more conservative duty to provide balance to the backline. This will also let you assign more varied roles to your midfielders.

In this instance, giving the right Wide Centre-Back a Defend duty will allow the Mezzala to be more aggressive with their forward runs. The WCB will tend to hold his position wide to cover for any potential opposition counters and he won't dribble forward and overlap as much as his partner on support duty. That is also because on the left side, the presence of the more defensively-minded Carillero gives your left Wide Centre-Back more freedom; the freedom to move forward and act like a real dynamic hybrid between a fullback and a defender.

So now that you have chosen your roles, there is another important element to keep in mind. What about the players' individual mentalities?

For a strong progressive passing game you need your defenders' individual mentalities to be relatively high - Defensive or even Cautious won't really be sufficient to make them regularly bring the ball forward or see off intense pressure from the opposition. Again, it makes sense because conservative play encourages defenders to take fewer risks. When faced with a choice between potentially losing the ball to the opponent's press or booting it upfield, the defender will almost invariably take the less risky option of sending the ball further away from goal.

When trying to build up possession from the back you will need very Technical defenders. To unlock their full potential you have to make sure that the tactic itself is allowing them to make the full use of their skills. As such, you will need to increase the risk taking across the whole formation, not just the attack and midfield. To do this you need to find an overall team mentality that brings up the individual mentalities of almost all your players to at least ‘Positive’ and ‘Balanced’.

The Attacking Team mentality might actually be ideal for progressive possession game. It makes the Goalkeeper act in a Positive way, with the defence and defensive midfielder split between Balanced and Positive. With these raised individual mentalities, the players will be much more decisive with their on-the-ball decisions.

The Pivot Player – The Key to Possession

The next important step is building the rest of the formation around the defenders. The key question you need to answer is when your two ball-carrying Wide Centre-Backs bring the ball forward, are there other players in good positions to receive it? For this, you will need a midfielder staying back to offer a safer passing option and cover for the adventurous movement of the WCBs. In a 3-4-3 diamond, you’re probably looking for a Half Back.

Think of this player as your defensive pivot around which the rest of the players move. They are the bottom point of the diamond and essential in providing a point of stability that allows the defenders to be more progressive. They have the lowest individual mentality in the formation and this makes them the player that is least likely to take the riskier option of dribbling forward. You need a player like this if you want to start your attacks with the defenders and not be caught on the counter.

While bearing mentalities in mind is important, it’s sometimes the Team Instructions that confuse the players and lead to opposite outcomes. A common one is telling your keeper to keep their passes short when other instructions you may have in place mean that even the best keepers will gravitate towards long kicks. Therefore, it might be better to allow the keeper to make his own choices on the length of the pass.

There is another way to limit their tendency to kick the ball over your defensive line towards the forwards, though. Personally, I tell my goalkeeper to Distribute to Centre-Backs. This keeps his passing options more open, mixing up the short passes with the occasional medium-length kick. Moreover, with this you are making sure that the keeper is mostly targeting the centre-backs.

Of course, there will be times when all three centre-backs are out of reach. That is why including Play Out Of Defence is also required. This instruction is essential in building up from the back. That is because it instructs both your centre-backs and defensive midfielder to drop back towards your penalty area, in turn facilitating their chance of receiving easier short passes from the keeper. While the Half Back should already drop back by default, with this instruction they should do so even more frequently.

‘Play out of Defence’ has another, more offensive, function. By dropping back when in possession, the centre-backs will pull the opposition midfielders with them. This is especially true when facing a high-pressing side. As such, when opposition midfielders try to press your ball-playing Wide Centre-Backs, they will invariably open up more space behind them; space that your own midfielders can exploit. 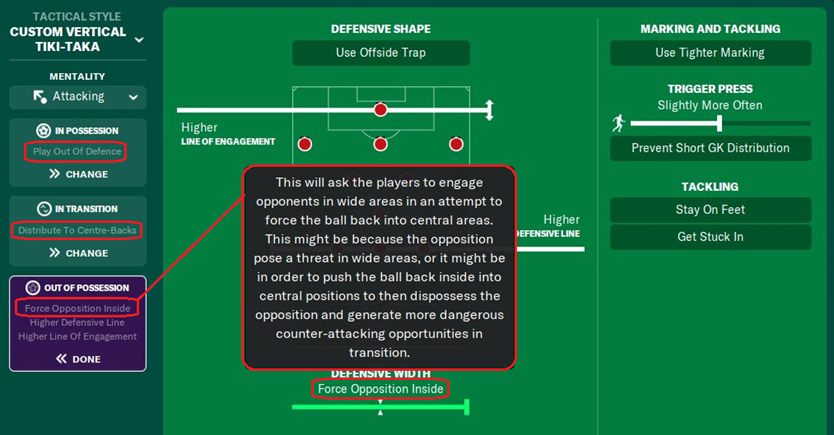 By channeling your opponent into the middle of the pitch, you are taking advantage of your numerical advantage there. The opponent will not be able to match you, especially once the Wide Centre-Backs join the build-up.

That, my friends, is why you want to have good passers with great decision-making in your backline, to see openings and act on them quickly. There is no room for hesitation or half-measures when implementing a possession football approach.