Regular Wednesday Wisdom contributor, FM Grasshopper is back and this time he's joined by his Grass n Gear podcast co-host, Dan Gear. Today, they're running an experiment to see if aggressive and passive tactical styles can be applied to the same squad, while giving you guys an idea of what's required to get the best out of both options. 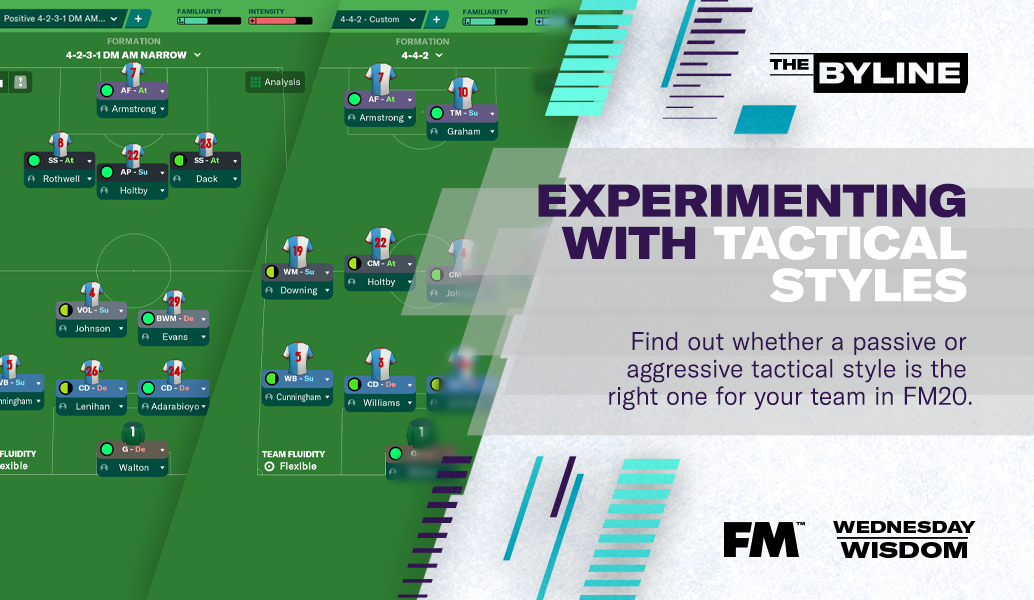 Despite it not being exotic, there’s a few reasons for using a 4-4-2 formation with Blackburn in FM20.  Firstly, setting up with two banks of four means that you’re not overly vulnerable on the wings…and you can give license to one or two in the midfield to bomb forward and support the strikers in attacks.

At Blackburn, I also wanted to build around Danny Graham and get the best out of his modest attributes in a Target Man role.  For Graham to flourish in my 4-4-2 he’ll need players to run off him…so I set his partner to be an Advanced Forward and his immediate wide player as a Winger on Attack duty.

In central midfield I opted to have a defensive minded player who can hold his position and link up with the defence and an attacking variant who can move forward and link up with the attack.  To compensate for Lewis Holtby’s license to roam forward, I set Stewart Downing as a Wide Midfielder on Support duty but used a Player Instruction for him to sit narrower.  This way, the central midfield area has more resilience from the opposition’s counter if Holtby is still upfield during an opposition attack.

With my Wide Midfielder tucking in, I have used a more expansive Wing-Back on Support role to advance into the space when in possession.  This is in contrast to the right side where I have a traditional Full-Back behind the attacking winger. 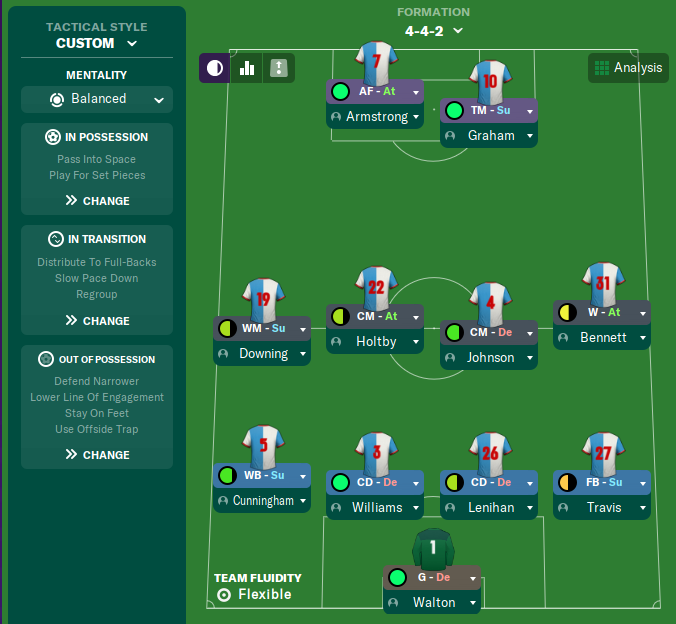 Balanced Mentality - The intention was to be solid, so it may surprise you that I am not overly defensive in terms of our mentality.  I think sometimes you can be overly defensive and invite pressure and problems on to you.  So, for the most part I recommend a Balanced mentality, and only opt for a Defensive one when facing a much stronger opposition.

Pass Into Space – We’ve got a trio of lovely attacking roles in the team that can make use of passes into space: The Advanced forward will obviously be looking to break beyond the opposition lines, but the Central Midfielder and Winger will also be looking to get further forward too.

Play For Set Pieces [optional] – An optional instruction here, but I’d like my team to play for set pieces…so that we can regroup but also use our prowess in dead ball situations.

Distribute to Full Backs – You will see that all of my ‘in transition’ instructions are designed to be more passive and slow things down.  Our goalkeeper is told to distribute to full backs, which is something I added in during pre-season when I noticed that keeping possession a bit more would make us safer.

Slow Pace Down – I also don’t want my team needlessly rushing with things, so my goalkeeper is told to slow it down a bit.  We’ll get in shape and then play on our terms.

Regroup – I don’t want my player to overcommit when possession is lost, I would much rather have them get back into position and make it harder for the opposition to break us down.

Defend Narrower – I have decided to defend narrower in order to be stronger centrally and encourage crosses from wider areas (seeing that I have faith in my Central Defender’s aerial ability).

Lower Line of Engagement – I’ve chosen a lower line of engagement, in order to make our team more compact.  Our team will still press within the opposition’s half, but not in a way that would expose us to frequent counter attacks.

Stay On Feet [optional] – Another optional one here, but the passive nature of our side is demonstrated with staying on feet and not going to ground to make tackles.  You are likely to make less fouls using this team instruction and in doing so lessen the chances of conceding dangerous free kicks against you in your own half.

Use Offside Trap [optional] – Seeing as I have both defenders on the same role and duty, I’ve decided to use an offside trap to stop the opposition from getting in behind.  There’s obviously a risk that it could fail, but I am willing to trust my defensive players and, hopefully, over time they will build a solid partnership in doing this.

Playing more passively doesn’t mean you do not attack, in fact you now have your team playing on your terms and on a more balanced tempo.  The below screenshot is one example of how our setup produces a goalscoring chance: 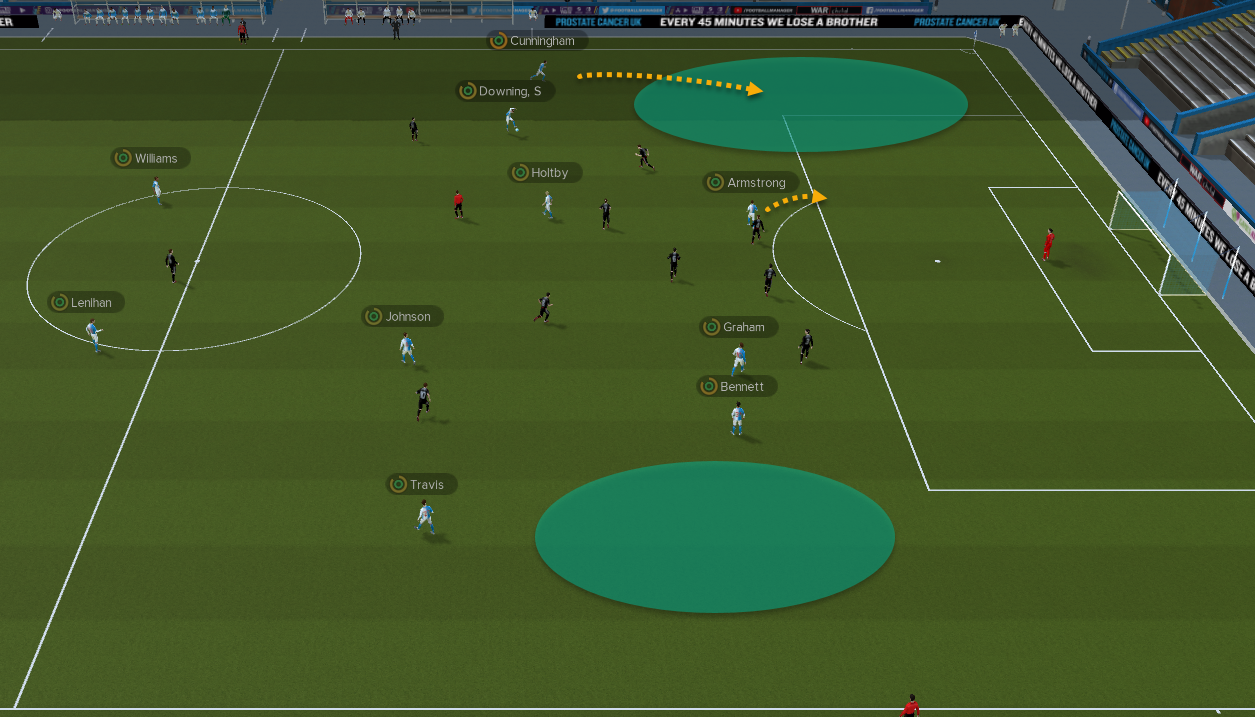 During the above, our Wide Midfielder (remember he has been asked to sit narrower) has the ball.  Beyond him he has a marauding Wing-Back running the line and also an Advanced Forward eager to get beyond the last man.  In this particular moment, the ball was released to the Wing-Back who advanced into the area and won penalty.  But you can also see the space on both sides in which I have to attack and the options when in possession.

Sitting narrow when out of possession means we are hard to break down, with two banks of four blocking the way.  I even have a Target Man dropping in to press and also an Advanced Forward offering the ‘out ball’ if I do turn over possession.

Overall, I am very happy with the balance of this tactic.  I have a variety in attack and a solid platform in defence.  For the vast majority of games, I’d be comfortable remaining on a Balanced mentality.  However, I would consider using a Defensive mentality when confronted with a more powerful opposition or higher league opponent in any future cup games.  Now over to Dan for a more aggressive version of Blackburn Rovers in FM20…

When building my tactic, I decided to build it around the current Blackburn team’s strengths and weaknesses. Like Tony, I have chosen Adam Armstrong in the Advanced Froward role because his attributes suit a high pressing tactic.  I have however dropped Danny Graham in favour of two Shadow strikers behind at AMC, who will benefit from the space Armstrong creates by pushing back the opposition's defence. The player role description reads “the shadow striker aggressively pushes into goalscoring positions as the ball moves into the final third and looks to close down opposing defenders when out of possession”.

These Shadow Strikers fit well with the style we are trying to implement, but also the Advanced Playmaker between them will find holes between the opposition’s midfield and defence which helps us transition the ball from defence to attack.

Two Defensive Midfielders give us a solid base in front of the back four. I’ve selected both full backs to play as Wing-Backs on support duty, due to the fact we are playing a narrow formation to give us some width. 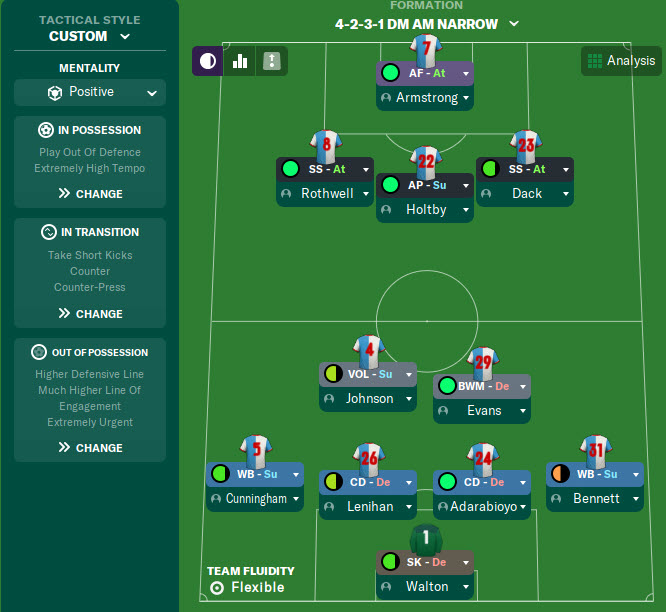 Positive Mentality -  The intention of this tactic is to press high and play on the front foot, a positive mentality achieves that. You don’t need to be attacking to achieve this, rather the player roles and other team instructions implement this style.

Play Out Of Defence – We want to press with the ball as well as without the ball so retaining possession is a priority by choosing play out of defence the players won’t look to play direct and risk losing the ball.

Extremely High Tempo – We need a high tempo to help implemnet the press, we don’t want the opposition to have any time to settle this instruction instructs our team to move the ball quicker.

Take Short Kicks – This instruction helps retain possession as mentioned in play out of defence.

Counter – When we win the ball back we want to counter attack straight away, catching the opposition out of position and expoliting any gaps in their defence.

Counter Press – When we lose the ball we want it back as quick as possible, this instruction helps us keep the pitch as small as possible, if we win the ball back quickly and high up the pitch we are closer to goal to create a scoring chance.

Much Higher Line Of Engagement – This instruction helps instructs our players to press high and engage with the opposition higher up the pitch.

Extremely Urgent – If an opposition player breaks the line of engagement our players are instructed to press the player extremely urgently. One again, this helps keeps the pitch small and hopefully in the opposition’s half. 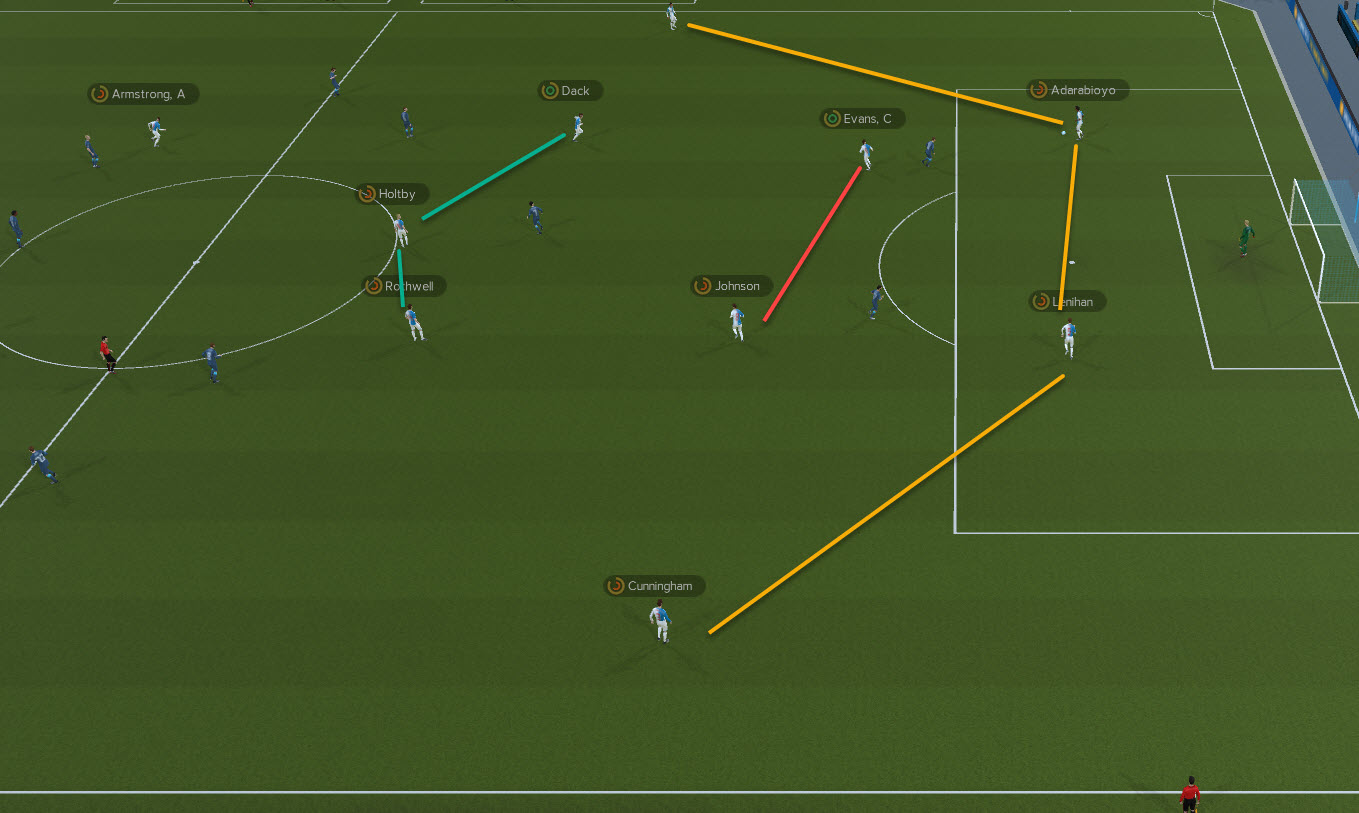 You can see the short goal kicks start here with the centre back receiving the ball deep and the advanced forward has pushed their defence back opening space in our half to move the ball forward.

Next you can see as the ball moves to the halfway line the higher defensive line has pushed up as the ball has moved over to the left and we have kept our shape.

Now the Advanced Playmaker has found space between their defence and midfield when receiving the ball, the front three have pushed forward and occupied the opposition defence creating space for the wing-backs to push on and receive the ball. (He passes left to Cunningham who dribbles down the line and crosses).

This passage of play has shown the press working from back to front with the team moving forward as a unit and the team instructions coming into play with the player roles and creating a scoring chance. 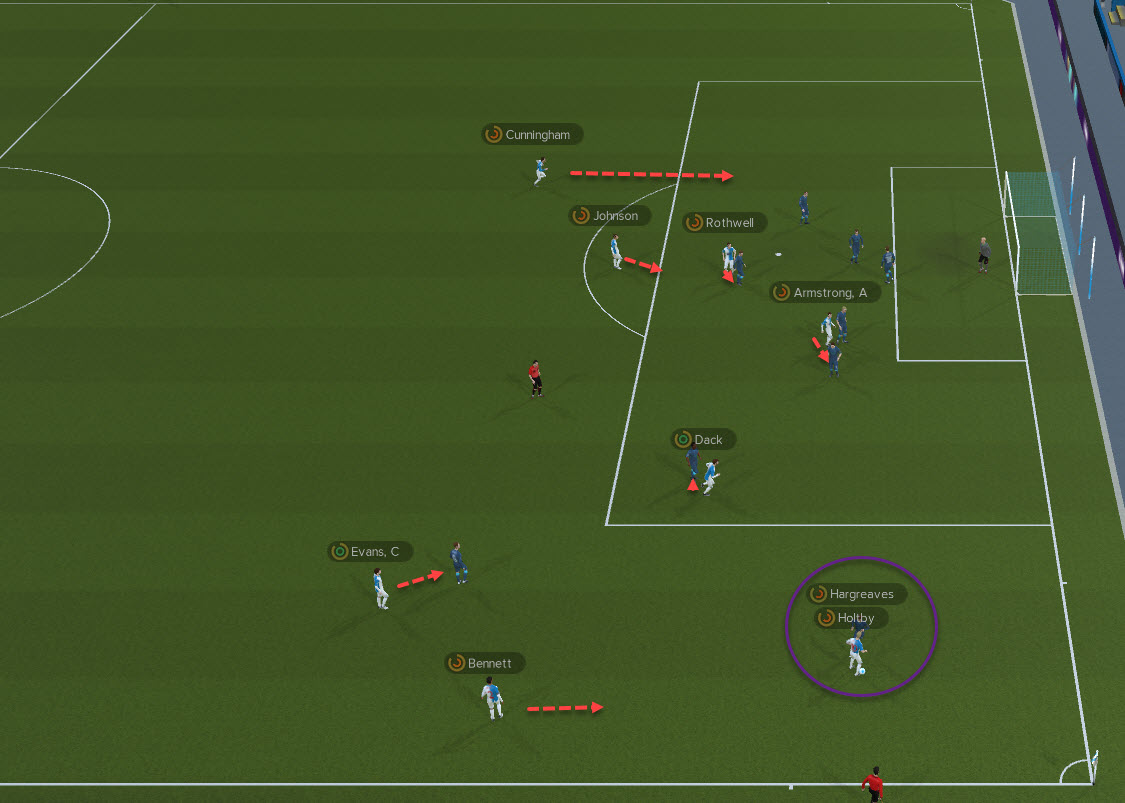 As you can see here the opposition defender has the ball wide, Holtby has closed him down while the rest of the team have pressed forward and squeezed the pitch into one corner limiting the oppositions options to get out of trouble. When we win the ball back (which we did) we are right on the edge of their box and we have options to create a scoring chance.

Overall, this tactic played out exactly how I wanted. Condensing the pitch into the opposition’s half, transitioning from back to front quickly and creating opportunities for us.

Our aim when working on this post was to show how two contrasting styles can still be effective in Football Manager 2020 for the same team. Whereas Dan’s Blackburn is aggressive and ‘in your face’; with his players constantly closing down and playing their football on a very high tempo. My interpretation of Blackburn is more reserved, we stay on our feet and have a lower defensive line.  Where my Blackburn regroup, Dan’s Blackburn counter press.  But both can work and get results.

It’s perhaps an analogy of our chemistry on the podcast, or perhaps even a wider analogy within football itself.  Thank you for reading.