No matter your approach, every football team should be looking to move the ball quickly towards the opposition’s goal after securing possession. The quicker they do this, the less time the opposition will have to organise their defence.

When teams fail to move the ball on quickly, they end up with too much possession and not enough penetration; the dreaded possession for possession’s sake. Fast attacking transitions and effective counters are an antidote to such ‘stale’ football.

Every football match is comprised of various parts, known as phases of play. In FM22, these phases are broken down into two categories: In Possession and Out of Possession. Where the magic happens, however, is between the phases. This is referred to as In Transition. 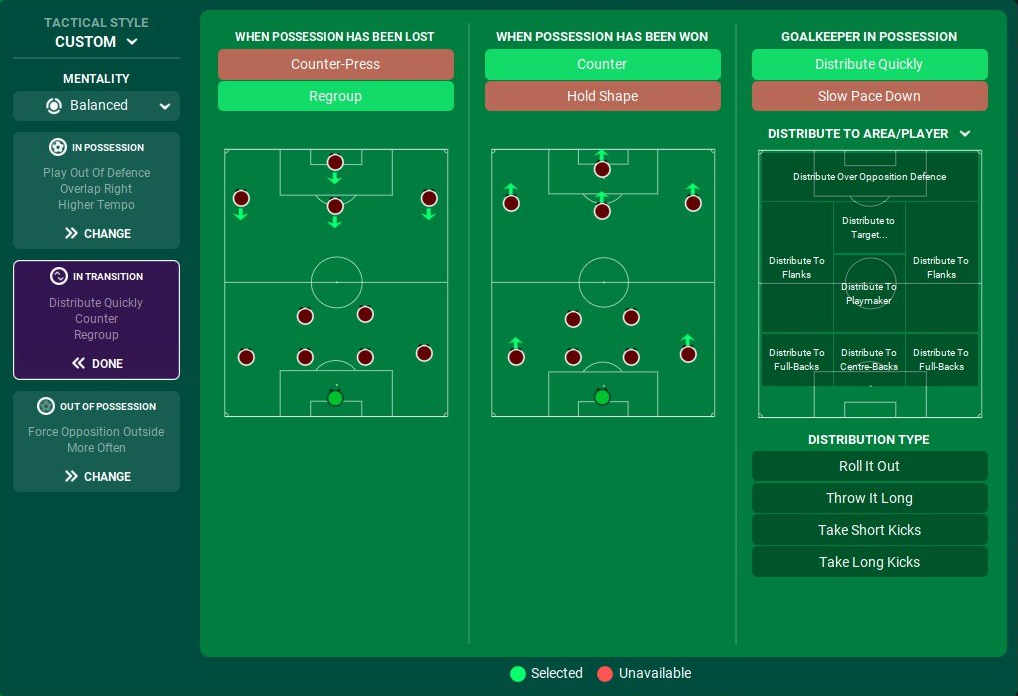 During transitions, you are instructing your players on what they should be doing between phases, so moving from in possession to out of possession or vice-versa. Do you want them to counter-press the opposition and try to win the ball back at all costs? Or would you rather they dropped back into their defensive positions and regroup in anticipation of an opposition attack?

The focus of this piece is on maximising attacking transitions, moments that typically last no more than 10-12 seconds, and specifically how to produce effective counter-attacks through Instructions and Player Roles.

Whether it’s a defence-splitting pass from one of your midfielders or a whipped cross from the flank, a good attacking transition involves the exploitation of space and is indicative of a balanced tactic. Ultimately, its success boils down to a logical distribution of roles and duties and a selection of a few key team instructions.

To showcase some of the roles and instructions you might want to use in your teams, I’ve put together an effective 4-2-3-1.

Central to this system are the players who will be feeding key passes and crosses to our attackers, so principally the Regista, Attacking Midfielder and the two Wing-Backs. The Ball-Playing Defender could also be part of his group, provided they have the right Attribute mix. 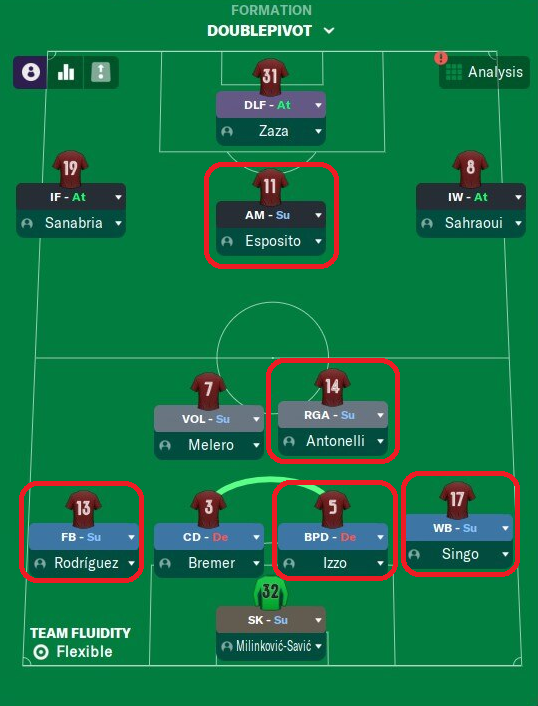 The 4-2-3-1 offers many avenues for crafting quick counters. There are players fulfilling playmaking roles at every level of the formation, meaning that attacks can be started from the flanks, defensive midfield and with the No.10 attacking midfield position. It also offers a three-pronged attack, with the attacking wide players always likely to join the central striker in taking advantage of all the chances created.

I’ve always found the Balanced mentality to be a good foundation for most of my tactics. It provides the perfect combination of player behaviours, as the attackers will take risks, but the more defensive players won’t become too adventurous and therefore leave you exposed at the back.

The real gradation in the level to which a player will attack comes from their individual mentalities. These give an idea of how much freedom the players are given regarding risk-taking and as a general rule you want the likelihood of a player taking risks increasing as the ball gets closer to the opposition penalty area. 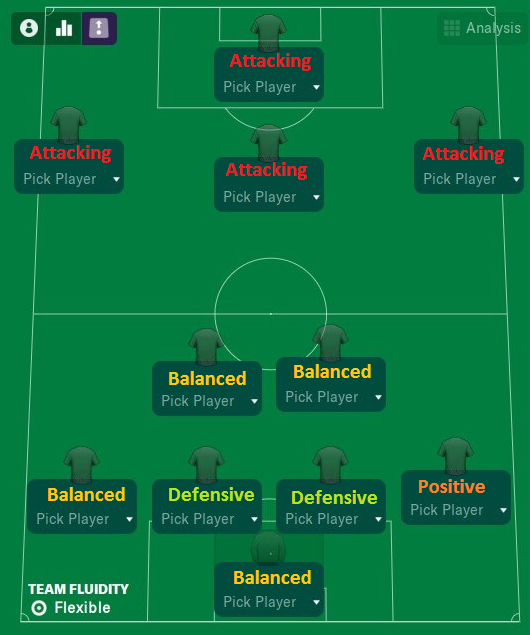 To avoid too much long-ball play or constant crossing from the flanks, I’m a bit more conservative with the roles and duties assigned to my defenders, full-backs and midfielders. This approach is complemented by the ‘Play from the Back’ tactical instruction – this makes sure that we don’t waste scoring opportunities by launching attacks too early. Once the ball leaves the midfield, the presence of more attack duties among my forwards makes the transitions more rapid, and hopefully more clinical, in the final third.

The Balanced team mentality helps to create this sort of ‘slow-to-fast’ build-up which would not be possible if we were playing with the more gung-ho Attacking approach. It ensures that as a team we are to defend and attack well and sets up more effectively when going against more defensive opponents when you need to probe for openings before exploiting the spaces you create.

While heavy pressing might be the vogue, doing this too much will compress your opponent around their goal and therefore deny you space for open looks on goal. Instead, you want a balanced approach wherein your defenders stay a bit deeper. By doing this, you’re inviting the opposition to commit numbers forward to press you, thereby opening space that you can set your quick wide players to run into.

Obviously this approach won’t work as well when you’re up against a total underdog, who are likely to stand off themselves and seek to deny you space. In those instances I tend to increase both my Line of Engagement and Defensive Line. I would even increase the team mentality one notch, to make my players even more proactive in their decision-making. For most opponents, however, my original balanced approach works rather well.

It's All in The Roles

To execute a tactic built around quick, effective attacking transitions, you will need the right sort of players.

When testing out this approach, a rather nice partnership developed between the Ball-playing Defender and Regista that became the creative fulcrum of the system. These two players start many of our scoring chances.

Not only does the Regista have great attributes for picking out precise long passes, but his traits are also perfectly suited to our style of play. Similarly, I always look for an ultra-creative player to play in the Ball-Playing Defender role. Sometimes I will play a converted midfielder or Full-Back (with decent Jumping Reach, Positioning and Tackling) in this role to take advantage of their passing range and vision.

I cannot stress enough that the quality of the creative players in these roles will impact directly on the quality of the attacking transitions created by your team. In turn, your forwards will need specific attributes to take advantage of the plays created by your creative players. In this, I would say that you will need at least three out of four of your advanced attacking players to be fast (Acceleration and Pace) and possess good Off the Ball and Anticipation. For best results when playing in the top division, you will want these Attributes to be at least 15.

You could get away with a less nimble striker, provided they excel as a typical Target Forward with good Jumping Reach, Balance and Strength. This way, even if they are not fast, they can be creative (with decent passing, vision and teamwork) and have the ability to draw in opposition defenders. With someone like this leading the line, your approach should be focused on making them the main target for passes and crosses so that your wide players could take advantage of second balls.

Finally, the most advanced midfielder plays a similarly important role in linking plays. So, even if you have a slower player here, they will make up for this with his creativity.

The distribution of duties is the most important aspect of any well-balanced tactic. A tactic that defends well but hits hard in the final third must have components that complement each other well and make up for their weaknesses. I designated the Left-Back as the more defensive one. They are instructed to stay narrower, almost like a third Centre-Back. As such, there are never less than three players staying back during our attacks, providing extra cover for the forward runs of the Regista.

Transitions and Counters in Action

With the ‘dos and don’ts’ of the tactic in place, it’s time to demonstrate some of the concrete examples I managed to produce in FM22.

Example #1: In this case, our play starts with a pass from my ball-playing defender (BPD). Some 10 seconds later, the transition ends with an eventual goal from our winger. This is exactly the sort of thing I want to see from this tactical approach. 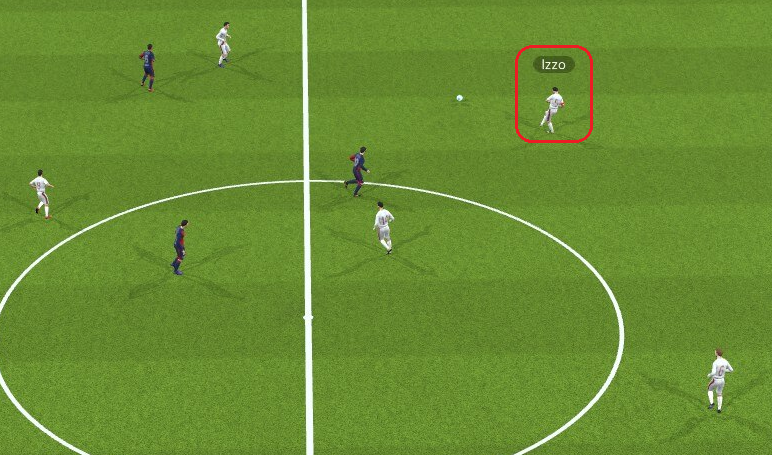 Let me discuss the factors which I believe influenced the quality of the chance that led to a goal.

Firstly, my BPD is a very creative player with great Passing, Vision and other relevant Mental Attributes. With the profile they have, it's almost like having a very deep playmaker.

His pass was received in midfield by our attacking midfielder. While a playmaker-type player, they weren’t playing in a playmaker role as this can slow the speed of the transition down. Instead, they put their good ball control skills to good use to receive the pass before moving it on quickly to our attacking trident.

Probably the most important factor in this goal is the brilliant off the ball movement of the entire attacking trio. This Attribute influences how a player moves when in not possession of the ball and when backed up by strong scores for Anticipation, Decisions and Acceleration, you’ll see them assess a situation and make a run into a position where they can provide the biggest goal threat.

In this instance, the Deep-Lying Forward was able to draw out a couple of opposition defenders with his run, opening up space for the Inverted Winger on the left to cut into. They received the pace from the Attacking Midfielder before rifling it into the back of the net.

This is just one example of the sort of goals my team were able to score throughout the season.

Hopefully you’ll have seen through this blog that it’s not too difficult to create an effective counter-attacking 4-2-3-1 tactics if you take your time to ensure there’s good synergy between Roles, Duties and Instructions. FM22 is a complex system of multiple interacting components, so you’ll likely have to make a couple of tweaks as the season goes on, but once you’ve got a tactic you’re happy with, you’ll hopefully see it come together like a well-oiled machine.