How to Create Simple, Winning Tactics in FM21

This guide from Ihor Crusadertsar is all about using generic player roles to achieve ‘simple’ but effective football.

By ‘simple’ I don’t mean football that’s very direct or devoid of beautiful play. Rather it’s a style that requires the least tactical input from the virtual manager. 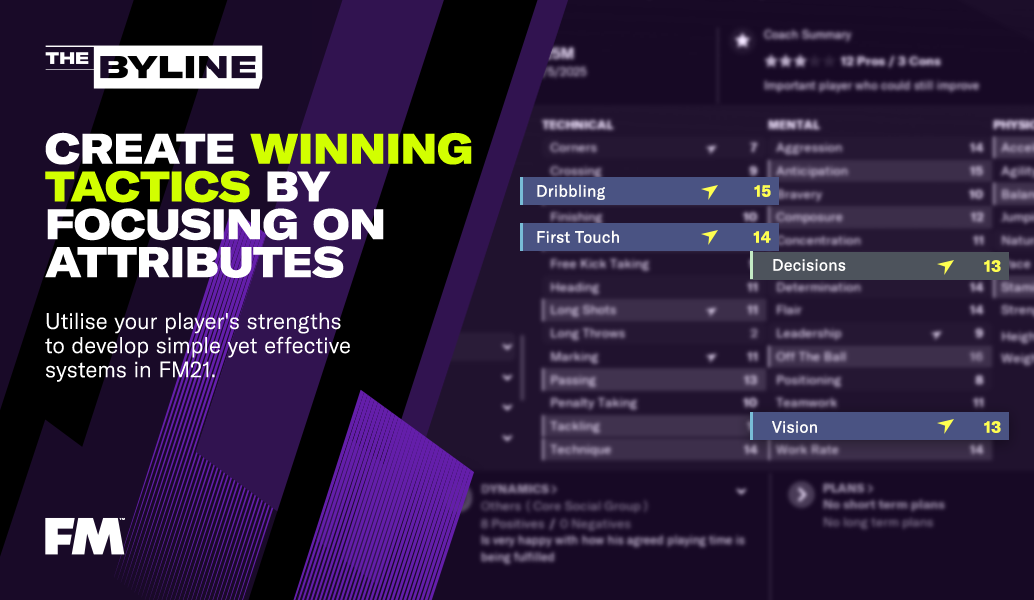 When creating a tactic in this way, one must depend on smart player selection (according to their attributes) to achieve tactical goals. Player attributes have a key role in dictating how that player behaves on the pitch and within the confines of the tactic. For example, good technical passers with high Team Work attributes tend to act as playmakers without you actually designating them in a specific playmaker role. Likewise, creative players positioned in a more attacking, forward role will bring through a unique blend of creativity and offense.

A striker with high Finishing, Off The Ball and Composure will gravitate towards being your primary goalscorer, even if assigned a supporting role.

Most winning tactics (in real life and FM21) are ones that have variety and unpredictability. This involves keeping player roles varied while using minimal team instructions - let the roles dictate the game. In this way, you create tactics that are easier to execute and adjust, and you’ll gain fluidity with your players.

The aim is creating tactics that are ‘simple’ in their instruction load (the number of team and individual instructions) while still maintaining a good level of ‘complexity’ in the plays your players are making on the pitch. The football created this way can be rich in both the variety and sheer number of player behaviours and movements produced.

How can role selection help with achieving variety and unpredictability? To give an example in FM21, let’s look at the classic 4-4-2 formation. It should be relatively easy to set up its attack with two strikers and two wingers.

Just by looking at the roles, you would think that the strikers will push forward to attack as the wingers run along the flanks and provide crosses for them. This could happen if you only use players whose attributes gravitate towards this behaviour, and in the long-term it would probably make your play very repetitive and predictable for the opposition.

Such predictable football could work very well in lower leagues with good wingers that are pacey and can cross. Yet it would not survive the test of the higher divisions, with more mentally adept defenders and midfielders. To succeed at a bigger club, you will need to inject variety into your tactics via your player selection. So let's rework the front four with that in mind.

A good rule of thumb for me when creating a well-balanced tactic is that no two players should be doing the same thing. Whether they are your forwards or defenders, the same rule applies. To achieve this, I reworked some of the roles and duties. While the shape remains the same, the players will behave very differently

As with the strikers, a similar concept can be applied when setting up your midfield and defence.

Although roles such as CM(defend) and FB(support) seem a little simple, this does not mean that all my players in these roles will act the same. When lacking team and individual instructions, player behaviour is strongly influenced by their attributes and unique player traits. Studying all of your player's attributes and traits should always be the first step in creating any tactic. Also, it’s even more important when you consider your team rotation, as depending on your players, your second team might play very differently from your first even when using the same tactic.

For example, a Full-Back with excellent Work Rate, Positioning, Jumping Reach and Tackling will provide a solid defensive presence in the back. He will almost act like a third Centre-back at times. Especially if he also has the "Stay Back at All Times" trait. He will definitely act differently from your other Full-Back who has great Dribbling, Acceleration, Off the Ball and Crossing. When you throw more aggressive traits like ‘Get Further Forward’ or ‘Dribble More’ into the mix, you can have him act like an attacking Wing-Back or even an Inverted Wing-Back (given the appropriate trait). All of this can be achieved without using any ‘exotic’ roles or adding any additional individual instructions. 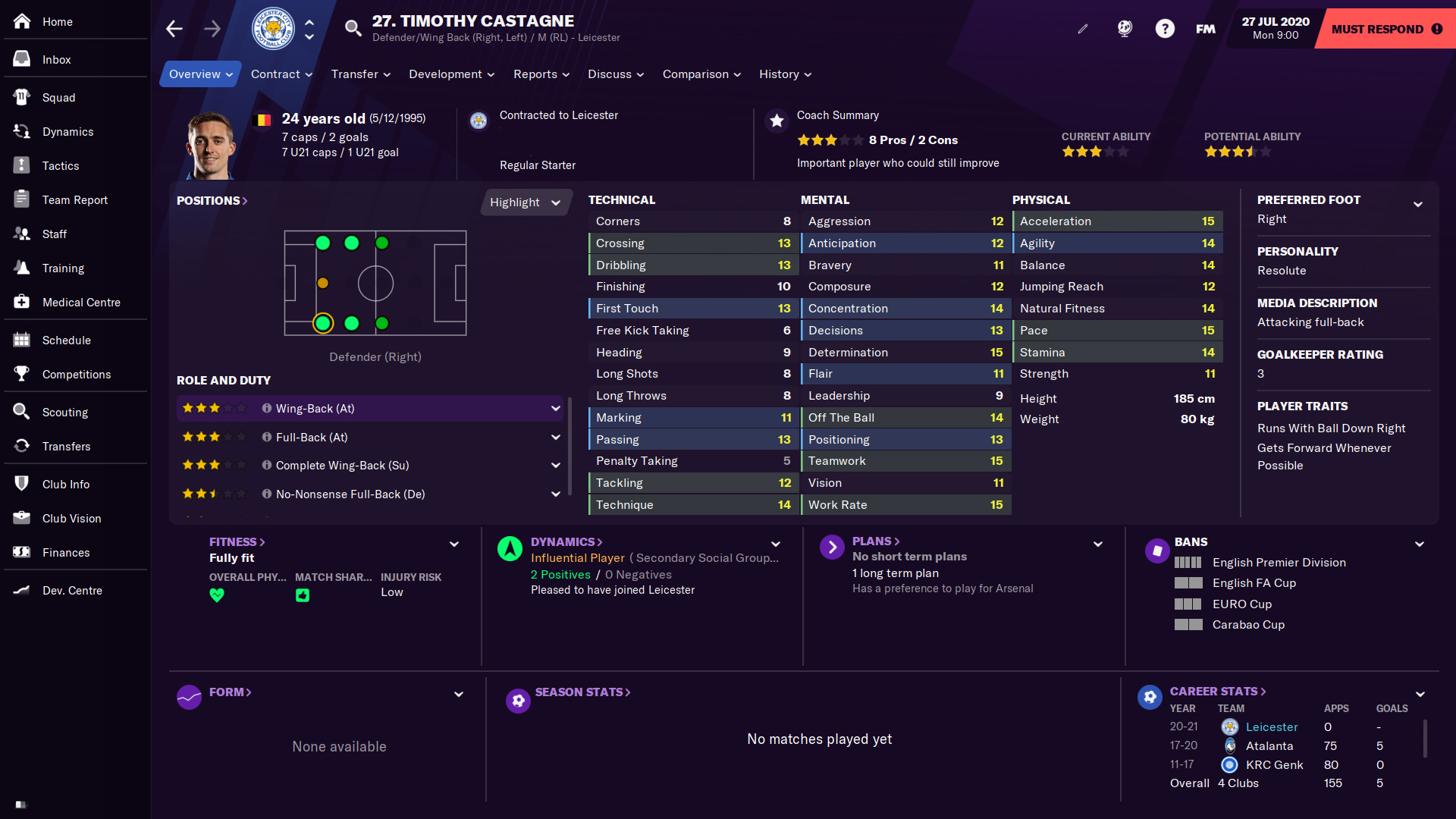 At Leicester, both Daniel Amartey and Timothy Castagne could play as a right Full-Back. Yet despite using the same FB (Support) role, both players will play this role very differently. Castagne's player traits will make him play much more offensively – in turn, this behaviour will greatly affect your wider tactic.

The added benefit of this is also that it removes the need to change roles when using different players, meaning it’s easier to make middle-of-match tweaks. For example, if you suddenly need to make your right flank more attacking to take advantage of opposition weakness, you can just swap in Castagne instead of Amartey to take full advantage of his more offensive attributes and traits.

Bringing it all together

Let’s run through one ‘simple’ 4-4-2. A classic formation which might appear simple at first glance but then, once you take the player attributes and traits into account, becomes complex in its execution.

The formation’s striker duo is the partnership that any good 4-4-2 depends on. In FM21, having two players that perfectly complement each other will separate an average 4-4-2 from one that will win you games and eventually trophies.

You might not have two world-class strikers but the two of them combined could more than make up for this due to a smart combination of attributes. Using two strikers could compensate for the lack of elite goalscorers and playmakers. Finally, it can allow us to use two players with dramatically different skillsets to a better combined effect. Matching a pure goalscorer, who is not capable of much else, with a tall forward good at playmaking, could create a deadly striker combo when neither player alone would set the world on fire. 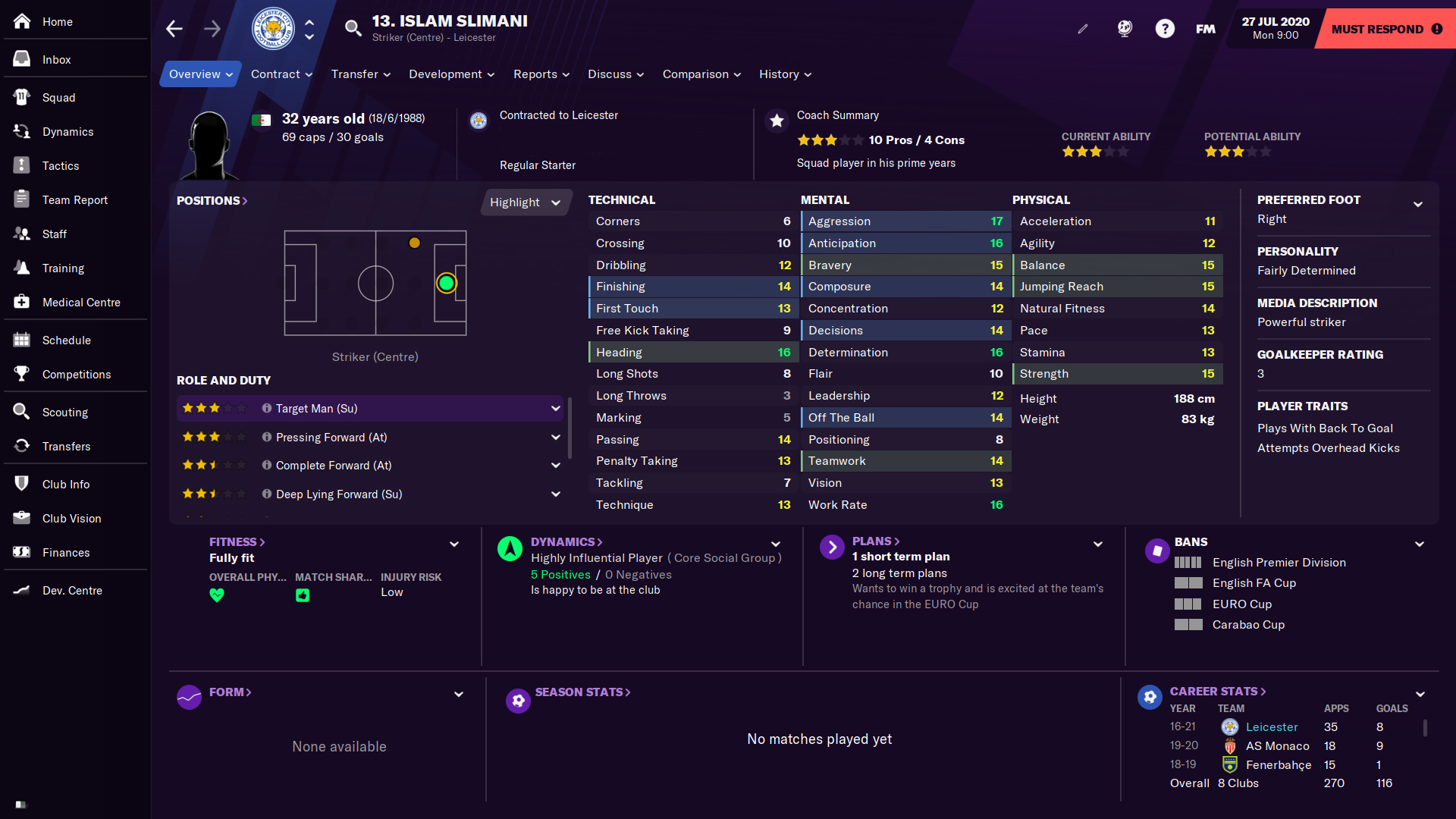 For example, even if you do not set up Slimani as a Target Man, his attributes (such as Jumping Reach and Passing) will naturally push him into being a lynchpin for most of your attacking moves. This will be especially true if you instruct your team to both ‘Float Crosses’ into the box and attack more directly – this will maximise the advantage you get from his exceptional height. If you were then to pair him with someone like Vardy who is fast, mentally strong and a clinical finisher, you have a recipe for success before you set up the rest of your formation.

What I love about 4-4-2 is that, at its core, it’s built on balanced player partnerships. This naturally works well with the other concept that I am trying to showcase, tactical variety. As in the example above, going with two Target Men or two Poachers is not ideal. You want the two partners to excel at different things as then their combined attributes can create a more complete package. Similarly, on the wings, what is the point of having two players do exactly the same thing? If your opponent is good at shutting down this type of play, you will be handicapped on both flanks.

To promote tactical variety, you should have one winger who is very fast and excels at crossing to your Target Man. Meanwhile, his partner on the other flank should ideally have strengths in other areas, like Dribbling, Passing and potentially Long Shots. Likewise, it’s you would want him to play on the side of his weaker foot as this way he will cut inside on his stronger foot to take advantage of his dribbling and creativity.

Behind the wingers, the Full-Backs will have to both complement each other and the wingers in front. As such, you should ideally play a fast, aggressive crosser behind the winger who cuts inside and a more defensively responsible fullback who tends to stay back behind your traditional crossing winger. Your wide players should look a little like this.

As you can see, both the winger and fullback partnerships are made up of players who do different things and create variety in your tactic.

In midfield too, the partnership is based on having one destroyer and one more adventurous creator/runner. By slotting the destroyer on the side closer to your inverted winger and more attacking fullback, you add much needed balance to your formation – this gives you balance as you’ll always have one player staying back and defending on the side that has more attacking movement from another player.

To complete our example formation, the centre-back pairing should also follow my rule of thumb. My ideal partnership would be an older, slower (but more technically skilled) defender like Wes Morgan next to a quicker player who can anticipate the play better. I choose their roles accordingly, but their attributes will do most of the work.

Even before choosing the team and individual instructions, I challenge you to try this out on a Balanced team mentality without assigning any instructions.

That completes my little guide to a ‘Simple’ Balanced 4-4-2 set-up. Hopefully you can see just how much power is hidden in smart player analysis and role selection. It is also why I believe squad creation is half the fun in FM21. Now it’s time to try it out and have some fun.