This week’s Wednesday Wisdom is a debut piece from @DictateTheGame with a focus on the Libero. The defensive role is one that isn’t spoken about too often in the mainstream analysis of football, but its fundamentals are very much ingrained in the modern game.

“Drops behind the defensive line, aiming to sweep up through-balls, pick up extra attackers and make goal-saving tackles, blocks, and interceptions."

"However, he will also roam forwards in support of the midfield when the team has possession."

It was Grande Inter who first introduced the role to the world in a revolutionary Catenaccio system. Ivano Blason was the first notable Libero, being dubbed the battitore libero – the ‘free hitter’. He was not the elegant Libero some may imagine but it was a new way of thinking about a defender. Nowadays, with possession and playing out from the back as important as it is, clubs look for technical quality as well as an ability to win the ball and read the game.

How do you get the most out of them in FM19?

For a Libero to operate at the top of his ability, you must build the formation around him. So, once you know that you have that special player to fill this role, there are a few things you need to keep in mind.

The Libero is basically an extremely withdrawn Deep Lying Playmaker, who while operating in the middle of the defensive line will make penetrating runs into midfield. Therefore, to use a Libero effectively, you need to push your defensive line high up with the aim of encouraging the Libero to get as close as possible to the midfield. At the same time, you could ask the midfield to drop deeper to facilitate the defender’s swashbuckling runs.

To operate effectively, a Libero, just like any playmaker, will need space. So, I recommend that you do not position players in the defensive midfield strata as they will simply get in the way of your marauding Libero.

Once in the midfield, the Libero will act similarly to a Regista. He'll split the defence open with long passes and, if he is on Attack duty, will make penetrative runs himself and take long shots from distance. If you have a great dribbler with good off the ball and long shot attributes, why not let him play more aggressively and provide a deep goal-scoring threat?

Consider the Libero's duty before picking who to play ahead of him. A supporting libero will need aggressive runners ahead of him, who are able to get into dangerous scoring positions. Thus, roles like the Mezzala, Box-to-Box midfielder or just a simple Central Midfielder on attacking duty will work.

When operating with Libero on attack, he is the runner. The midfielders in front of him will need to be able to support him by holding up the ball and playing one-twos. At the same time, you do not want to put playmaker roles directly ahead of the libero in either central midfield or attacking midfield strata. Playmakers tend to be ball magnets, drawing it away from the man we’re focusing on; the Libero should be the focus and centrepiece of your formation. 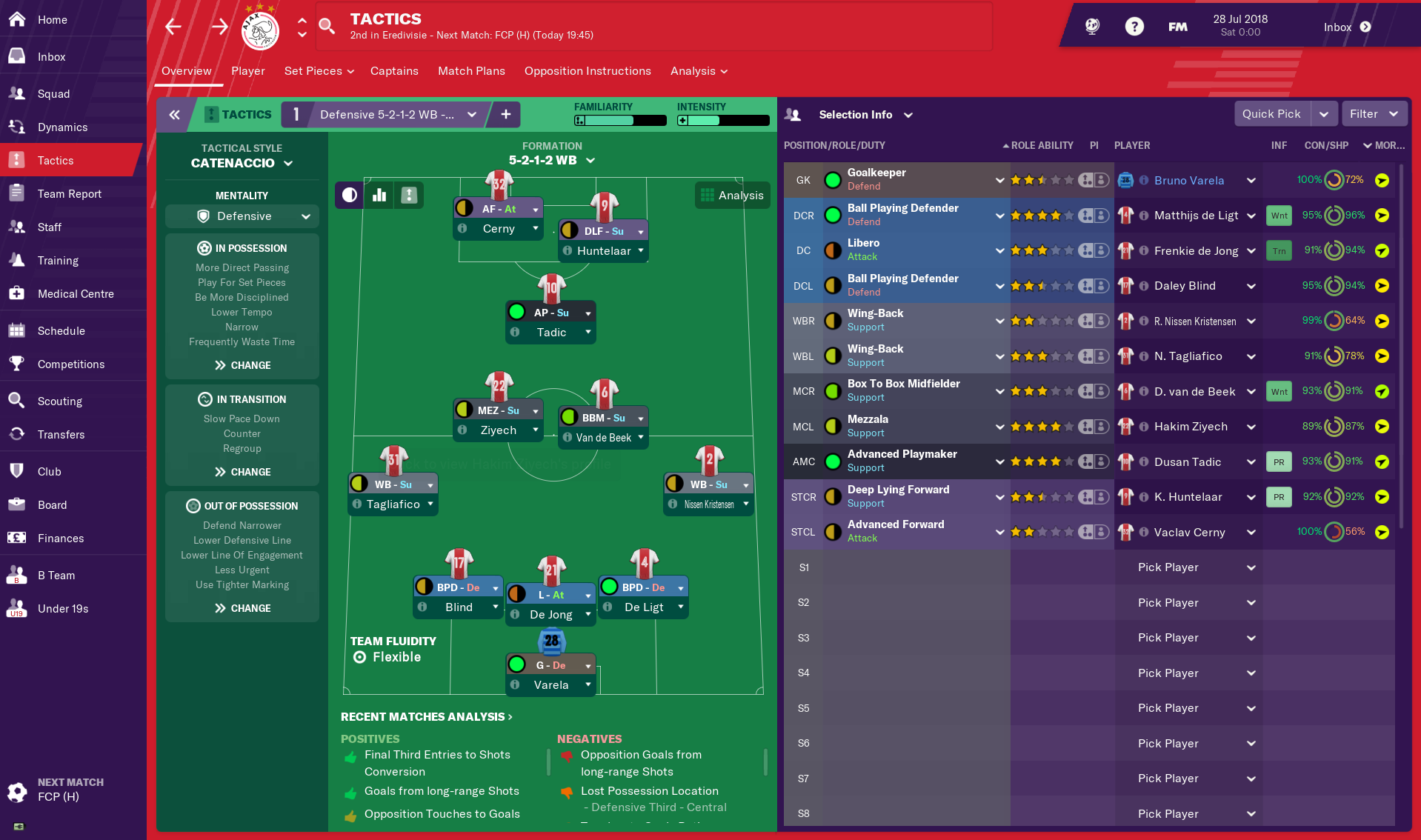 We need someone who can read the game well and make tackles and interceptions in the defensive third with the technical ability and composure to execute long-range passes or carry the ball into midfield.

We need someone who can read the game well and make tackles and interceptions in the defensive third with the technical ability and composure to execute long-range passes or carry the ball into midfield.

A good example of this type of technical centre back would be Frenkie De Jong. 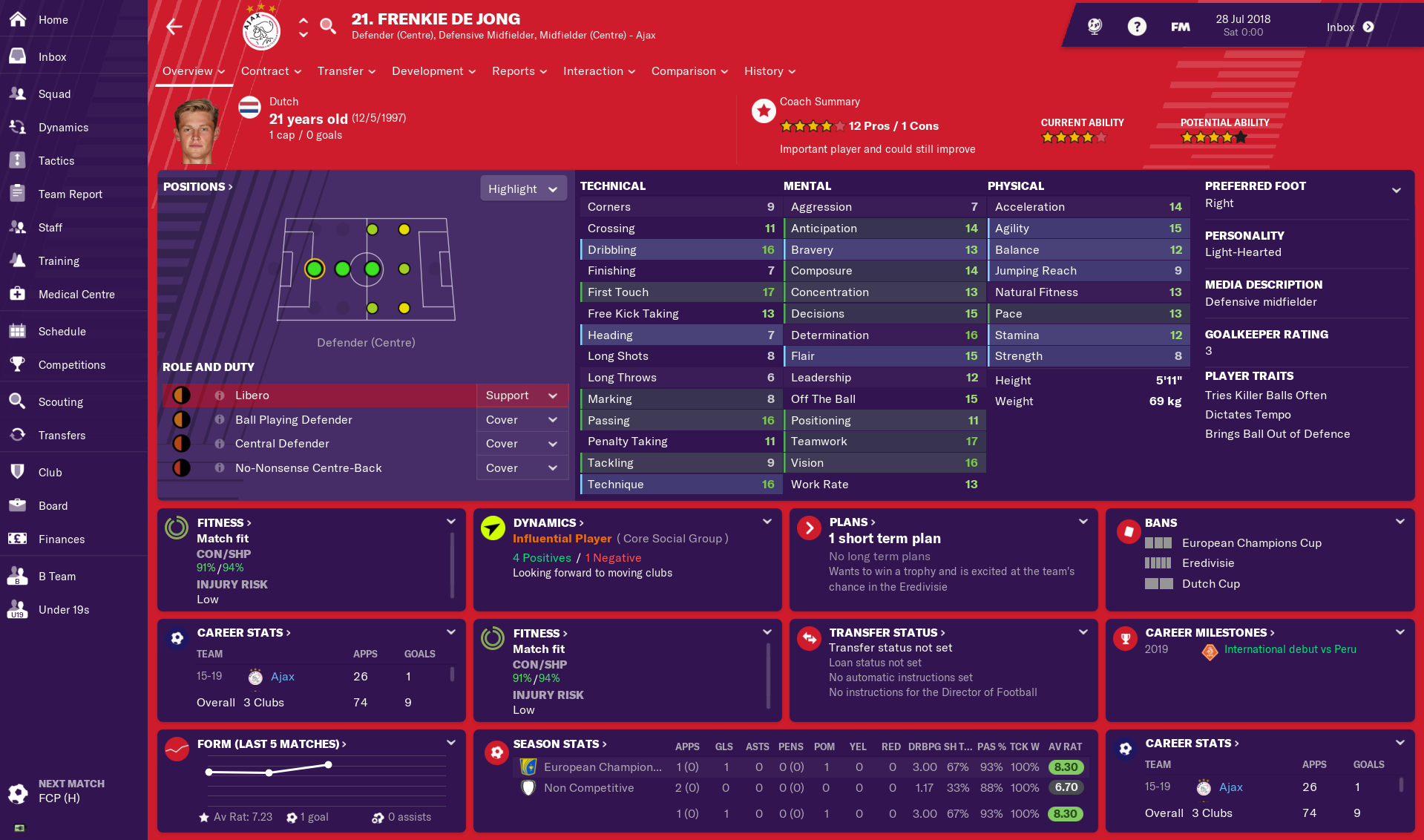 His high Composure, Passing and Vision combined with good Positioning, Decisions and Anticipation make him perfect for performing the Libero role. Good player traits to watch out for and encourage would be "tries to play his way out of trouble" "brings ball out of defence" or "attempts long-range passes".

In this article, I’ve shown a good example of a player to fill the Libero role as well a simple tactical system to take advantage of the role. The best thing about of this role in FM19 is experimenting, discovering and developing your own amazing Liberos, because it’s not a natural role - that’s half the fun. The other half is in tinkering and creating tactics to unlock the full potential of your role, it’s not often you get to build your system around a defender…