Have you or your scouting team ever unearthed an absolute gem of a player that would fit perfectly into your system, only to find out that they have no interest in signing for you? With advice from FridayNightFM as he walks you through a few steps that can help change a player's mind and change the way that you operate in the transfer window forevermore. 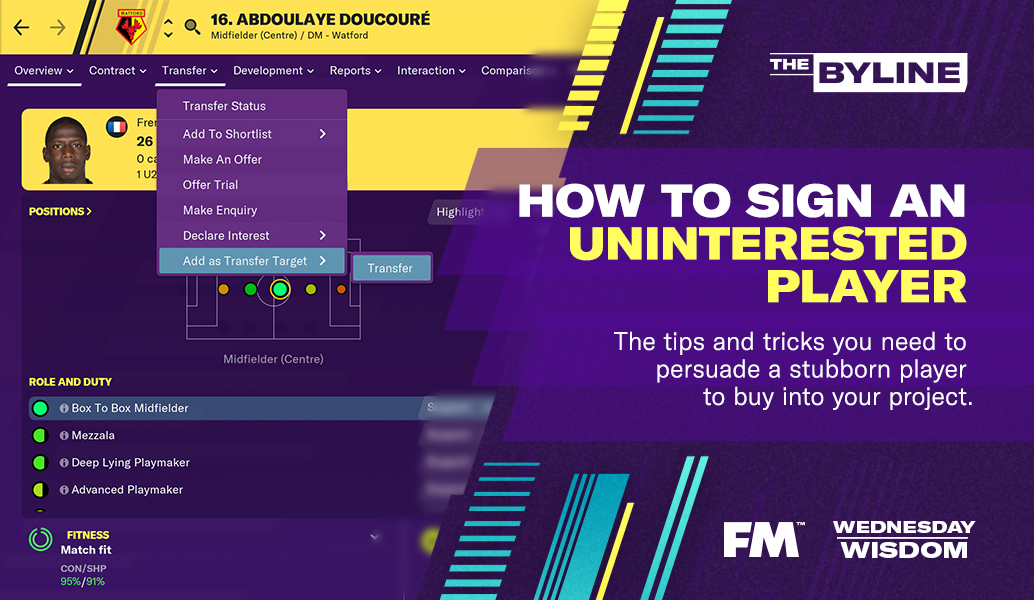 I will start by presuming that you’ve already scouted the player, have made your judgement and you’re in the preparation stage of making a bid to bring the player to your club. The following tips and tricks have proved successful over the years, but they don’t guarantee success, even if you do track the player season after season.

The dreaded no interest screen - you will be familiar with this screen having seen it whenever a player isn’t interested in joining you. Fear not, this isn’t the end of the road; just because he isn’t interested now doesn’t mean he won’t be in the future.

Step One – Make a Transfer Enquiry

At this stage we’re just testing the waters and we’re only working out how their club values them. If they’re a Star Player the likelihood is that you’ll get an inbox message saying that the player is not for sale at any price. Should they come back with a transfer figure, it’s worth noting down what they’re after and we can use it later if we manage to change the player’s mind.

In Football Manager you have the option of making a player a transfer target or a top transfer target (the top transfer target option is only available at higher reputation clubs). If this player is your number one priority then make him your Top Transfer Target, but both selections produce the same result; an inbox message from the media asking you to comment on the rumours that you’re interested in signing the player.

If you answer the media questioning in the right way the player will be asked to comment on your response and it’s now that you’ll start to see if there has been any change to his acceptance of a move.

Now’s the time to crank up the media pressure by sitting in the stands and watching your Top Transfer Target strut his stuff in the flesh. To visit a match, simply select the team the player currently plays for, go to their schedule and look for the ‘-’ on the schedule - this indicates that you do not have any scheduling conflicts. Clicking on the ‘-’ will change this to ‘Attend’, meaning that you will now be able to view this game as it appears in the schedule.

You don’t have to do anything else - as the date approaches you will be taken in to the game as you would your own, you’ll see the line-ups and with a bit of luck the player you’ve come to see will be playing. Once the game is over you will see an inbox message that states you were at the game watching the player and, as before when declaring your interest, you’ll get an idea of the player’s opinion on signing for you after they’ve appreciated your visit. The more you do this the more you are likely to influence the player’s opinion of you.

An often underused feature in Football Manager is player interaction. In this example you would use the ‘get top player to promote move’ to generate a bit of extra media attention. Good examples of this are to use favoured personnel, former teammates or international colleagues but it will still have an impact if they are a highly reputable player.

This is really a last throw of the dice to try and change the player’s opinion of you. When you look at the player’s information tab you will see a list of his favourite personnel (these can be a mixture of playing and non-playing staff) and bringing one of these players in to the club may increase your chances of the player wanting to join.

Once you’ve worked through the steps listed above you will hopefully have seen that the player’s opinion on a potential transfer has changed. If it has, then making a transfer request is your next step. Get that accepted and there’s a great chance you’ll be able to start negotiating a contract with the player.

If you can’t get a bid accepted then my advice would be to repeat the steps above, concluding with another transfer offer. If the player’s opinion of you gets to a stage that he’s keen on a transfer you may see him attempt to push through a move himself and ultimately end up on the transfer list where there’s a chance you’ll sign him for a lot less than that number you wrote down at the start.

I hope that these tips help you to obtain those harder-to-get players and that you’ve now got a few more strings to your bow when it comes to playing the transfer market.