We all see player attributes, club data and stadium information in Football Manager, but where does it come from? We are assisted by more than 1,000 researchers across the world who help put our database together but that wasn’t always the case. The research team started out quite small in the mid-1990s but it has expanded almost exponentially since then.

Hours are spent watching players in action in order to collect data for individuals, teams, or, in some cases, entire countries. A lot of work goes into putting our industry-leading database together – it involves much more than just a few people sitting in SI towers, entering numbers into spreadsheets. Many of those who have worked as researchers for Football Manager have moved into jobs in the footballing world as a result of their knowledge and commitment, so it can be a pathway to the job of your dreams. 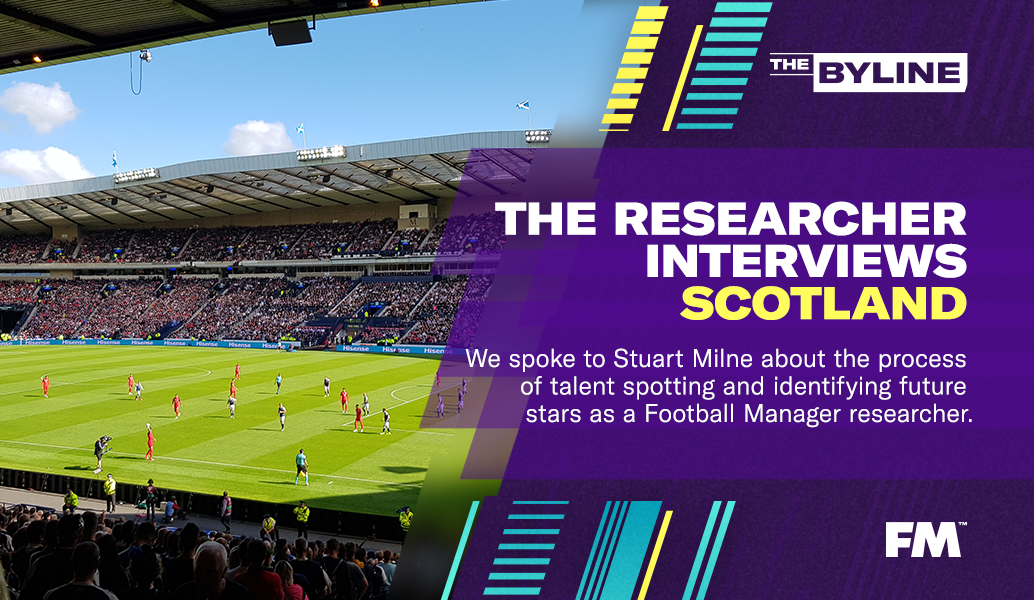 Over the course of this new series, we will introduce you to a few of the people who play such an important role in making the game what it is.

Stuart Milne is our Scottish head researcher and he has been involved with FM for more than two decades, starting as an assistant researcher in 1997 before taking up his current role in 2000.

I got involved as an assistant by simply emailing in to point out some issues with the Dundee United squad in an old version. Back in those days Miles (studio director Miles Jacobson) was in charge of the English and Scottish databases and asked me to cover Dundee United. Then in 2000, I was asked on an old chatroom (which is so old that many readers may not have even heard of such a thing) if I would take over the Scottish database.

There is no science to this, and I think it will vary from player to player. If you’re talking about Current Ability, then in some cases it’s easy to say after a few games that a player needs an increase or a decrease when he either makes a first-team breakthrough or if he comes into the Scottish database from abroad. But to get a handle on all the attributes that make up that Current Ability, it just takes time and being able to see enough of that player to make an informed decision.

I think sometimes researchers have difficulty differentiating between Acceleration and Pace, and often just rate them the same, but they are mutually exclusive things.

The other ones that are difficult to rate are the ones that you don’t often see a player do enough to be able to make that decision. So how do we know what to give a player for free kicks, long throws or corners if they never take them? Or what about the finishing ability of a centre back who is very rarely put in a position to score with the ball at his feet?

Beyond that, some of the mental ones can be tricky as well. These are often unseen unless a player is particularly good or bad at them.

It’s harder to rate the potential of players at a lower level than a higher one. I don’t think many would have said that Andy Robertson would play in a European Cup-winning side when he was at Queen’s Park, for example.

I don’t mind if a player’s potential ends up being overrated, because surely by its very nature, potential is something that people may not achieve.

I personally think that season one in a game of FM isn’t as fun as a Head Researcher, because you know which moves to make. When season two kicks in and the game becomes more of a mystery then it makes things better for Head Researchers to play.

Have there ever been any players that you’ve spotted who have gone on to achieve success?

Personally, I would say Andy Robertson. It’s not the done thing to make big changes to a player’s profile after only a small number of opportunities to see him play, but it was clear he was a special talent when he signed for Dundee United.

I also make sure to keep in contact with scouts and youth coaches at as many of our senior clubs as possible. They are often big fans of the game themselves, so want the data to be the best it can be. With that in mind, we’ve been able to identify some great players - Billy Gilmour being a current example - long before they’ve reached the first team.

I’m always very proud of the work my team does and I can’t think of many players who have come through the ranks in Scotland and gone on to achieve a decent level of success here or abroad who we haven’t flagged up as having good potential.

What are the unique challenges of researching in Scotland?

Unique is a strong word. Relative to England there are teams who play in the leagues represented in Football Manager who have very few fans, and so finding a dedicated researcher for them can be tough.

Like most big leagues in the world, it’s also a balancing act to make sure that you rate players fairly and can justify it to the angry fans of other clubs who inevitably think they are overrated.

If there was one singularly unique challenge of being a Head Researcher for Scotland though, it’s getting people to understand that Mark Kerr wasn’t technically overrated in those early versions. Without going into too much detail, the way attributes were balanced relative to a player’s Current Ability was very different back then, and so although Kerr had a Current Ability score that should have meant he was no better than a good Scottish league player, his attributes provided a perfect cocktail alongside that match engine back in the day to make him into a Football Manager god. It wouldn’t and couldn’t happen nowadays.

And the irony of it all is that the guy who first gave him those attributes managed to carve a very successful career for himself scouting players for some of the biggest clubs in the UK; a job he still does to this day.

If you are interested in joining the research team, a list of current openings can be found on our forums.