The Main Winter Update is usually a big moment in every year for Football Manager fans. It’s a time when January transfers are registered and the ratings of thousands of players across the world are adjusted based on their performances through the first half of the season. We’ve dug through our database to pick out 10 of the best players who got a Current Ability upgrade in the Main Winter Update.

We rarely pass up the opportunity to talk about Jude Bellingham so when we discovered that he was one of the upgraded players, it was a no-brainer to include him.

Bellingham may still technically be in the development phase of his career but the 18-year-old is already blossoming into one of the best midfielders in the world. An accomplished passer with a deep gas tank, Bellingham’s had an upgrade because of his increased productivity for Borussia Dortmund, scoring three goals and recording six assists in 22 Bundesliga appearances so far this season.

He’s got the ability to dominate the middle of the park for club and country for at least the next decade. It’s up to you to make sure that happens in FM22. 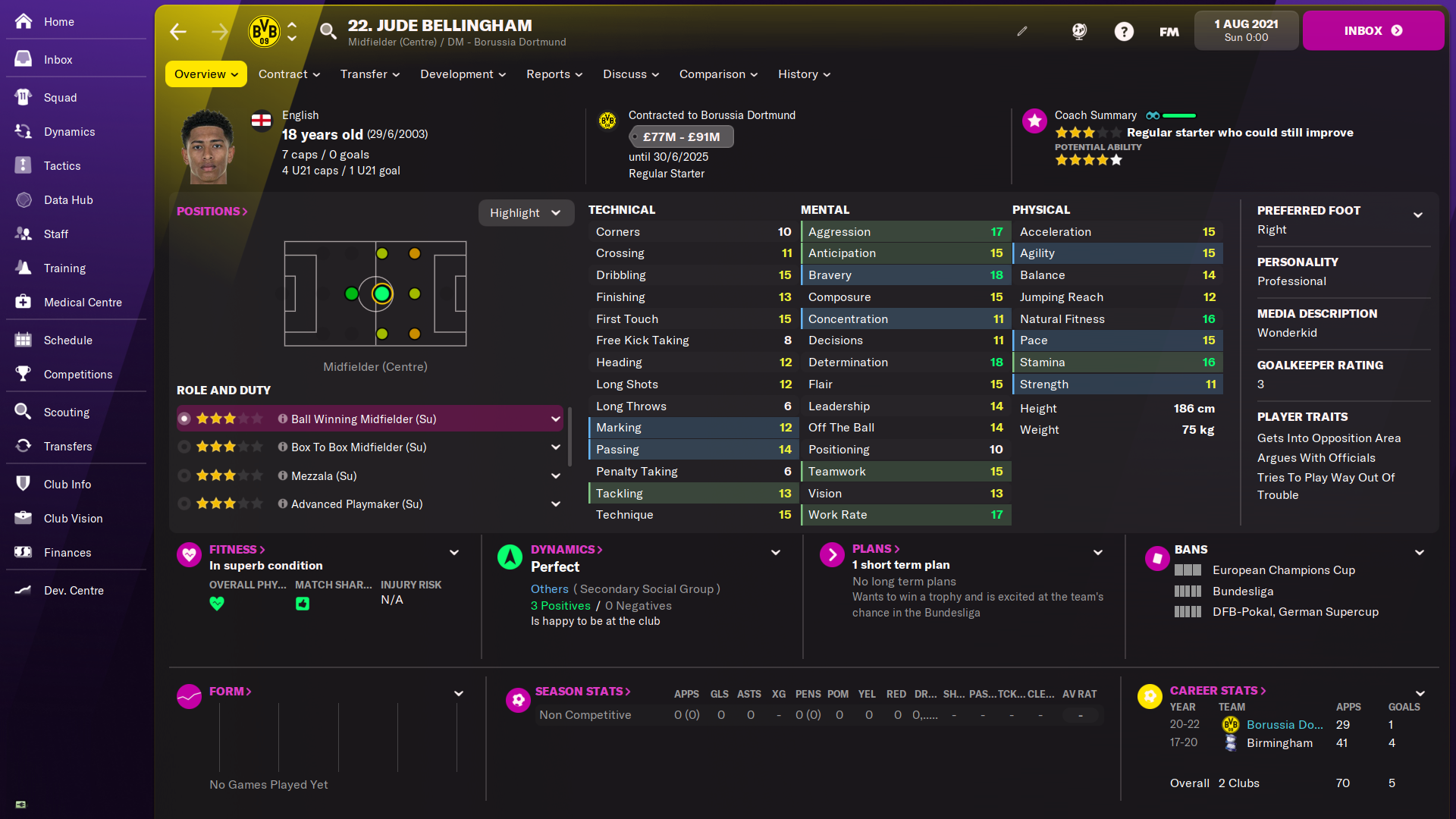 AS Monaco have overcome a slow start to put themselves right in the frame for European qualification come the end of the season. Key to that resurgence have been the performances of Aurelien Tchouameni.

The 22-year-old is attracting interest from some of the continent’s biggest teams and it’s easy to see why. Capable of playing in central or defensive midfield, Tchouameni is aggressive in the tackle, a physical runner and an astute passer. He’s the sort of player who’ll cover every blade of grass in 90 minutes and with this upgrade he’s now shaping up to be the complete package.

Dutch right-back Jeremie Frimpong has been one of the best players in the Bundesliga so far this season and it was no surprise to see his stellar performances recognised with Attribute increases.

Blisteringly quick, Frimpong has shown an eagerness to drive forward and take on opposition players. He’s tended to get the better of them too, racking up six assists and becoming integral to the way Bayer 04 Leverkusen like to play.

Bayer 04’s strong first few months of the campaign have also yielded improvements for some of their most consistent performers, including Ecuadorian defender Piero Hincapié. A lot was expected of the left-footed central defender when he moved to Germany and he’s already shown the ability to slot in seamlessly. 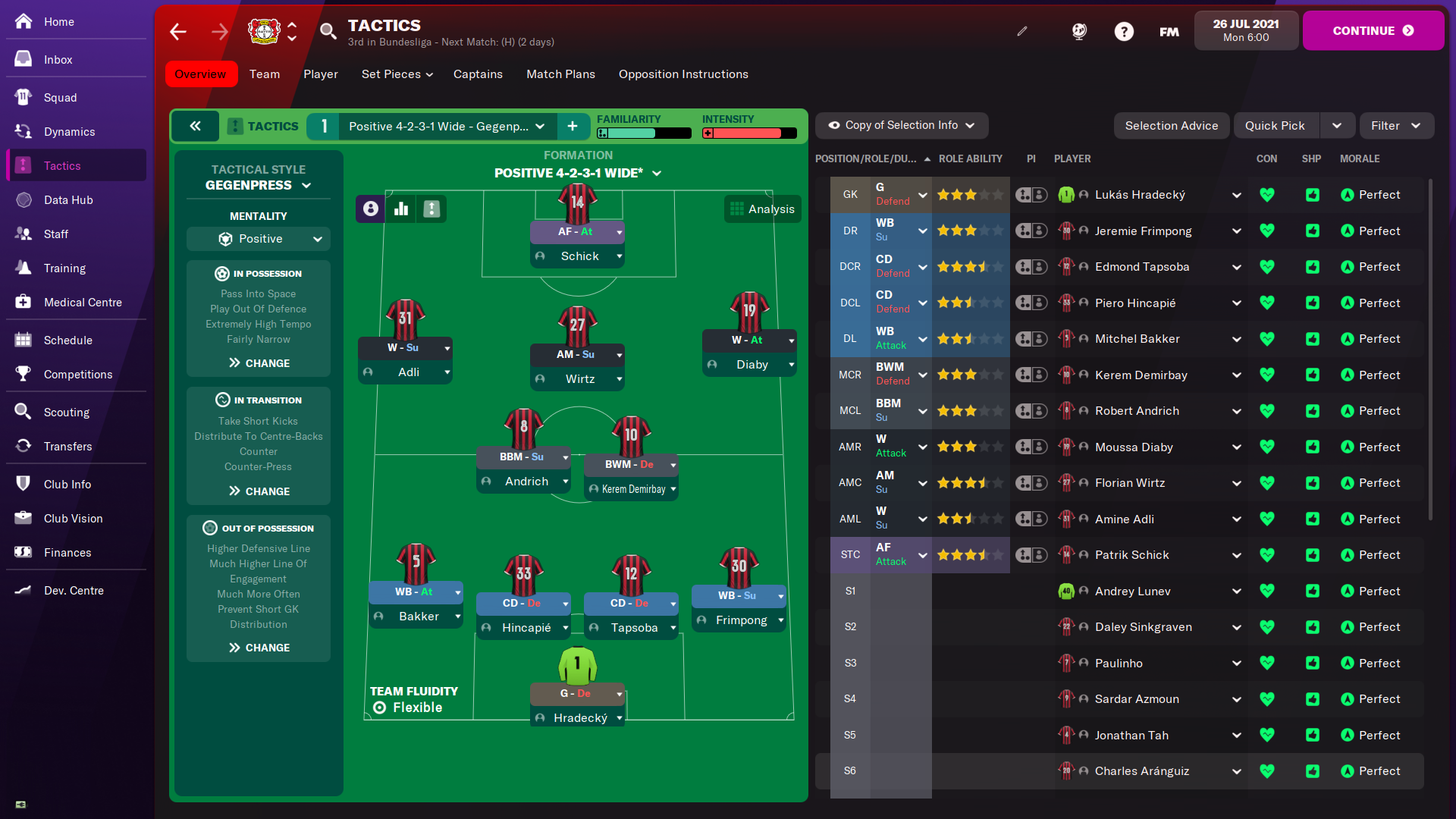 Derby County have been battling against the odds on and off the pitch this season, aiming to avoid relegation from the SkyBet Championship despite facing a 21-point deduction.

The Rams have had to rely on their youth players and performances packed with grit and togetherness. Among those to show real maturity beyond their years, and therefore receive upgrades, are midfielder Liam Thompson and Irish right-back Festy Ebosele.

Thompson is a mobile central midfielder who likes to play a short, simple passing game while Ebosele is blessed with the sort of raw speed that causes his opposite numbers real panic. Harness their raw talent on FM22 to help fire Derby to safety.

Scotland has produced more than its fair share of left-backs in recent years and the latest to step up is Aaron Hickey.

Bologna’s switch to a back three this season has benefitted the former Hearts man, allowing him to play further up the pitch as a left wing-back and get forward at every opportunity.

Relatively quick, Hickey has added a finisher’s instinct to his already good long-range shooting; his four goals in 24 appearances make him one of the highest-scoring defenders in Europe this season.

It wasn’t much of a surprise to us to see French teenager Hugo Ekitike linked with a Deadline Day move to England’s top-flight after seeing his performances for Stade de Reims this season.

After starting his career as a winger, Ekitike has enjoyed a breakthrough campaign for Les rouges et blancs, recording three assists and nine goals in 21 games to establish himself as their main man up front. 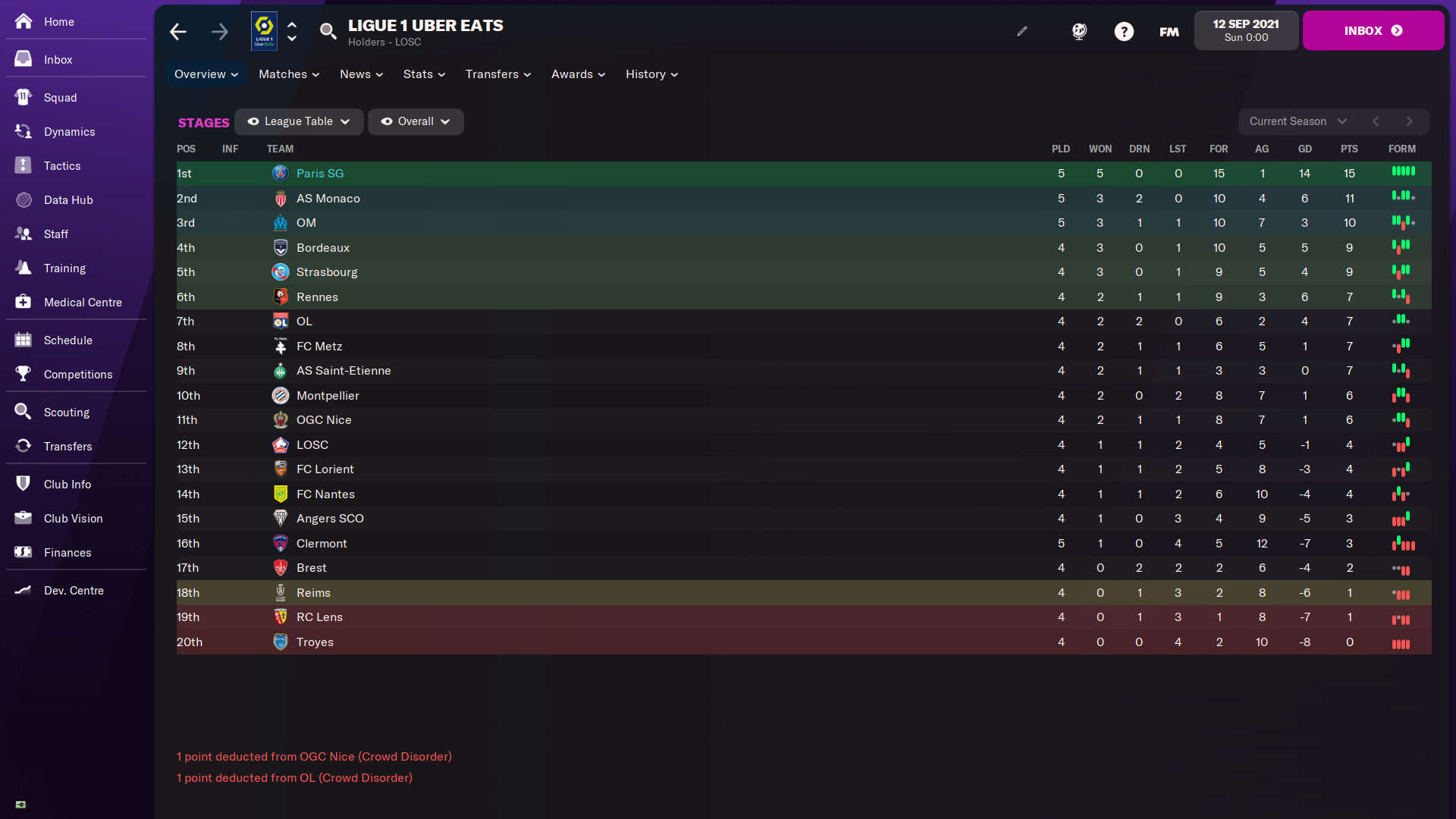 Another player linked with a late January move to one of England’s top clubs was Fulham’s Wonderkid attacking midfielder, Fabio Carvalho.

The 19-year-old has been a key part of Fulham’s relentless assault on EFL goalscoring records this season, his dribbling ability, speed and exemplary decision-making creating chance after chance for the West London outfit.

With seven goals and five assists in 23 appearances, Carvalho has already shown that he’s got the end product needed to become a key figure in English football for a long time to come. 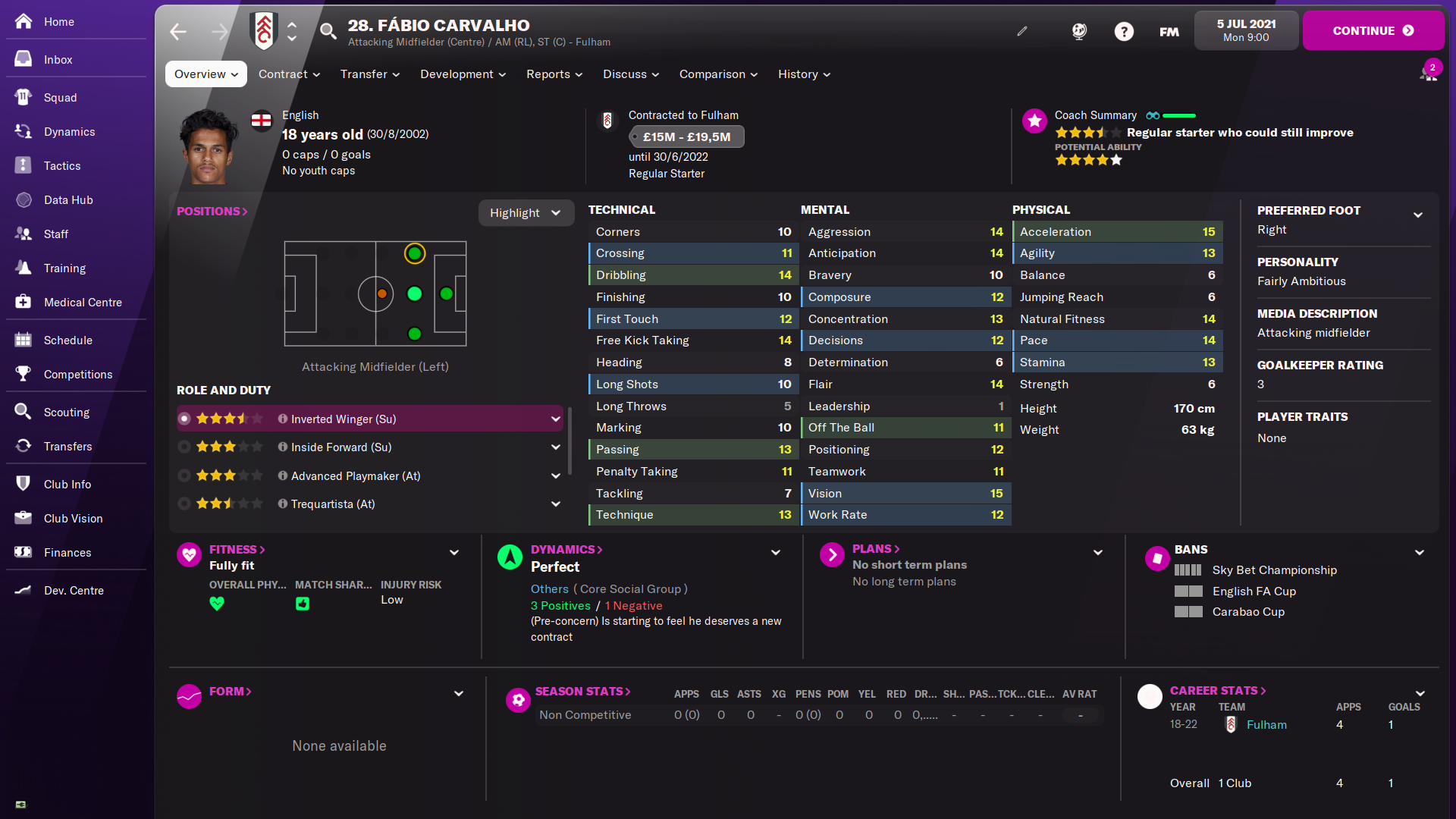 Sheffield United haven’t been quite as electric as Fulham in the SkyBet Championship this season but one of their bright sparks has been the emergence of French attacker Iliman N’Diaye.

Signed from Boreham Wood in 2019 after coming through the academy at Olympique de Marseille, Ndiaye has been a first-team regular this season, scoring three times in 22 games.

Full of trickery and skill, one of Ndiaye’s greatest strengths is his First Touch. Could he be the attacking diamond in their late push for a play-off spot? Can you unlock the 21-year-old’s full potential?

The promotion race in the Vanarama National League has been fascinating this season and a big reason that Chesterfield are leading contenders is because of the goals plundered by Kabongo Tshimanga.

The striker has had a fairly nomadic career since coming through at MK Dons but he’s now seemingly found a home with the Spireites, scoring 24 in 27 appearances. To put his goalscoring feats in context, no one else in the league has more than 15 goals. Unsurprisingly, Tshimanga has received one of the biggest upgrades in the division.

Chesterfield staved off EFL interest to hold on to Tshimanga in January. Can you do the same, getting similar returns from the 24-year-old to fire the Derbyshire club back up the English football pyramid?

In recent years the Danish Superliga has forged a reputation for providing a great pathway for young African talent and one of the latest to benefit from this route is Raphael Onyedika.

The 20-year-old Nigerian, comfortable in defensive or central midfielder, is an aggressive ball-winner who likes to regain possession and lay the ball off to his more creative teammates.

In addition to providing stability for Midtjylland’s midfield, Onyedika has also chipped in with four goals across all competitions. It’s that all-round development that his seem him receive a big upgrade in this update.

He’s not the only Superliga talent to watch out for, with talented Swedish youth international Roony Bardghji making his debut after turning 16 in November. The midfielder scored in just his second senior appearance for FC Copenhagen and looks to have a very bright future indeed.

Tens of thousands of other players have also received upgrades across the footballing world. We look forward to you finding them and guiding those players to glory in FM22.