You might have thought that this year’s January transfer window was pretty quiet, bar an interesting Transfer Deadline Day. There was, however, some really clever business done across the footballing world, including several moves that definitely warrant the FM seal of approval. We’ve put together a list of 10 of our favourite deals that you might have missed. You’ll be able to guide all of these players to the top with their new clubs in the FM22 Main Winter Update.

Ok, this wasn’t exactly an ‘under the radar’ deal seeing as Augsburg smashed their transfer record to snap up Ricardo Pepi from FC Dallas, but we were never not going to start a list like this without talking about one of our favourite Wonderkids in FM22.

The 19-year-old entered the radar of many of Europe’s top clubs after scoring 13 times in 31 games for Dallas last season and making his breakthrough with the US national team.

Augsburg have been struggling in the Bundesliga this season but they’ve pinned their hopes to Pepi and the pace, guile and natural finishing ability he’s already displayed. Can they, and you, unlock his full potential? 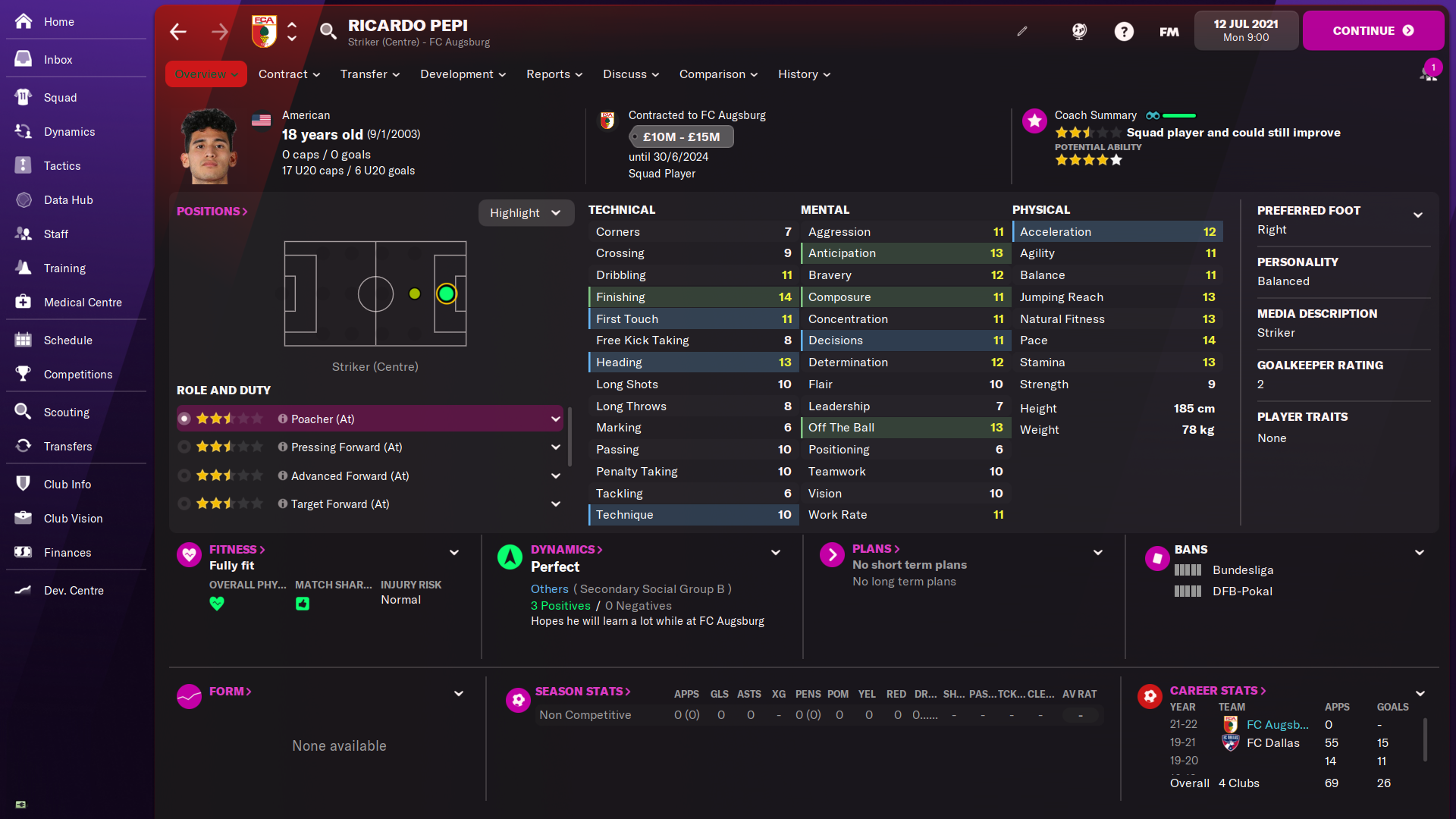 Pepi wasn’t the only American international to earn a big move from MLS in January, with Daryl Dike swapping Orlando City for West Bromwich Albion.

The 21-year-old already has EFL experience, pushing Barnsley to a play-off place last season after scoring nine goals in 19 appearances during a loan spell.

The Baggies have largely built their current playing style around the prospect of Dike, a quick, physical and instinctive finisher, joining and now he has, they’ll be very hopeful that he can make a similar impact at The Hawthorns and give impetus to their quest to secure an immediate return to the top-flight.

From one club who were waiting for the final piece of their frontline puzzle we turn our attention to a club who used the January window to refresh their strikeforce entirely - VfL Wolfsburg.

VfL Wolfsburg have really struggled this season, sitting just above the relegation zone with the joint-worst attack in the Bundesliga at the time of writing. They hope that the solution to that, in part at least, will be the acquisition of Danish striker Jonas Wind from FC Copenhagen.

Tall and clinical, the 23-year-old looks tailor-made to be the focal point of their new-look attack and he should be ably supported the veteran experience of Max Kruse and the talents of exciting left-midfielder Kevin Paredes, whom they signed from MLS outfit D.C. United.

Another Bundesliga side looking abroad for new recruits were Hertha Berlin, who are hoping that South Korean winger Lee Dong-Jun can give them another dimension in the final third as they push for a top-half finish.

Capable of playing up front as well as out wide, the 24-year-old scored 11 goals in 28 games for Ulsan Hyundai in the K-League last year. While it may take some time to adapt to the rigours of the Bundesliga, we think he could prove to be one of the bargains of the window.

Fiorentina also made some changes to their forward line during January, shipping out their top scorer for a record fee and replacing him with Arthur Cabral and Jonathan Ikone. It was the latter’s move that intrigued us most.

A left-footed winger at his best cutting in from the right, Ikone is an accomplished dribbler with a bag of tricks at his disposal. While he didn’t have a particularly productive first half of the season with reigning French champions Lille, he registered 21 goal contributions in the previous two campaigns. If he can recover that sort of form, he should make an immediate impact in the Italian top flight. 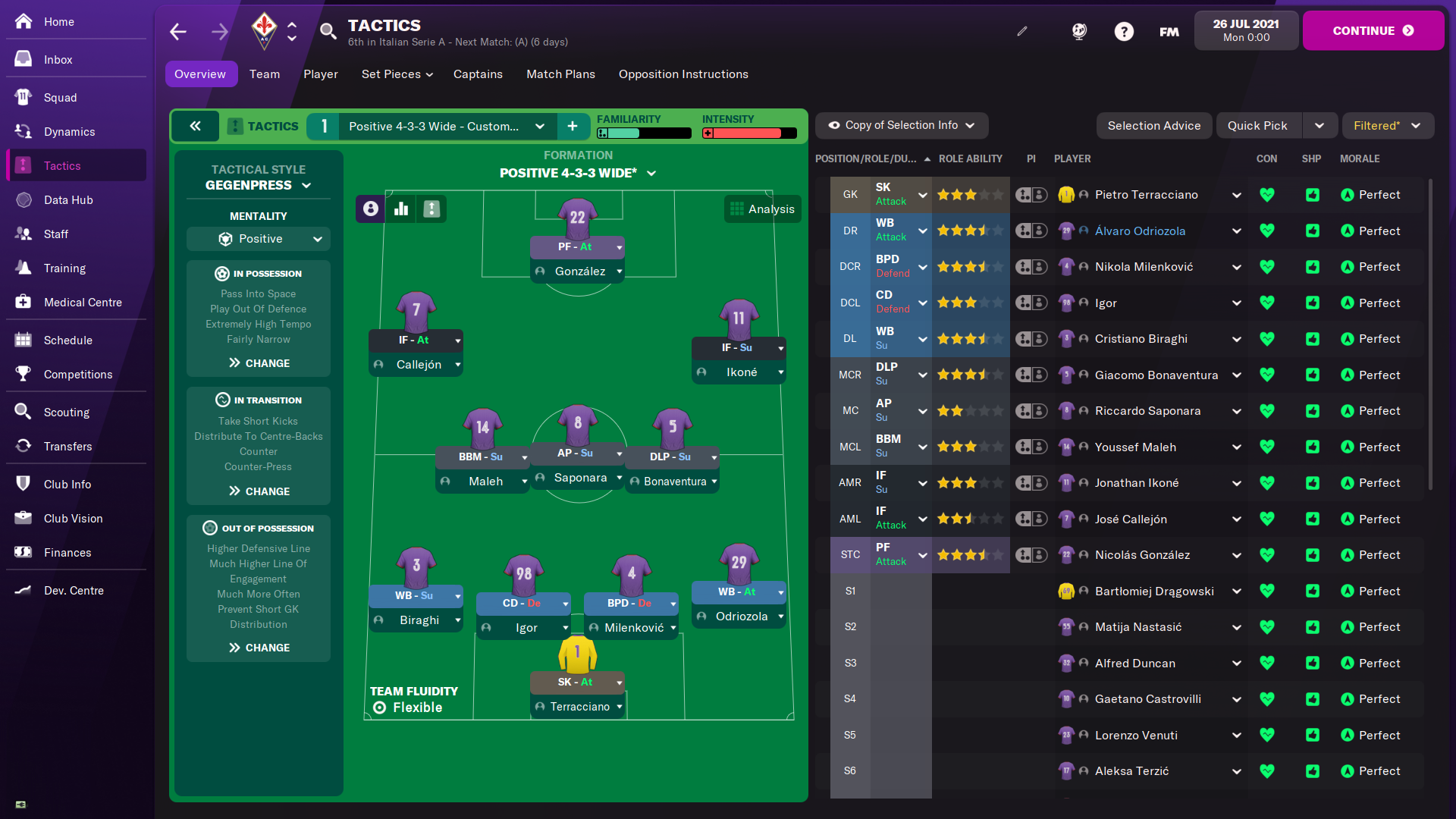 Whenever Hatem Ben Arfa gets a move, there’s going to be a temptation for us to include him in an article like this. One of the most naturally gifted players of his generation, there’s always been a feeling that for a variety of reasons he has never managed to realise his full potential.

Ben Arfa hasn’t played since he left Girondins de Bordeaux last May but Lille have turned to him in the hope that the 34-year-old can help push them from mid-table towards the European places.

He’ll need time to get up to speed but can you get the most out of him, helping him to enjoy an Indian Summer in northern France? 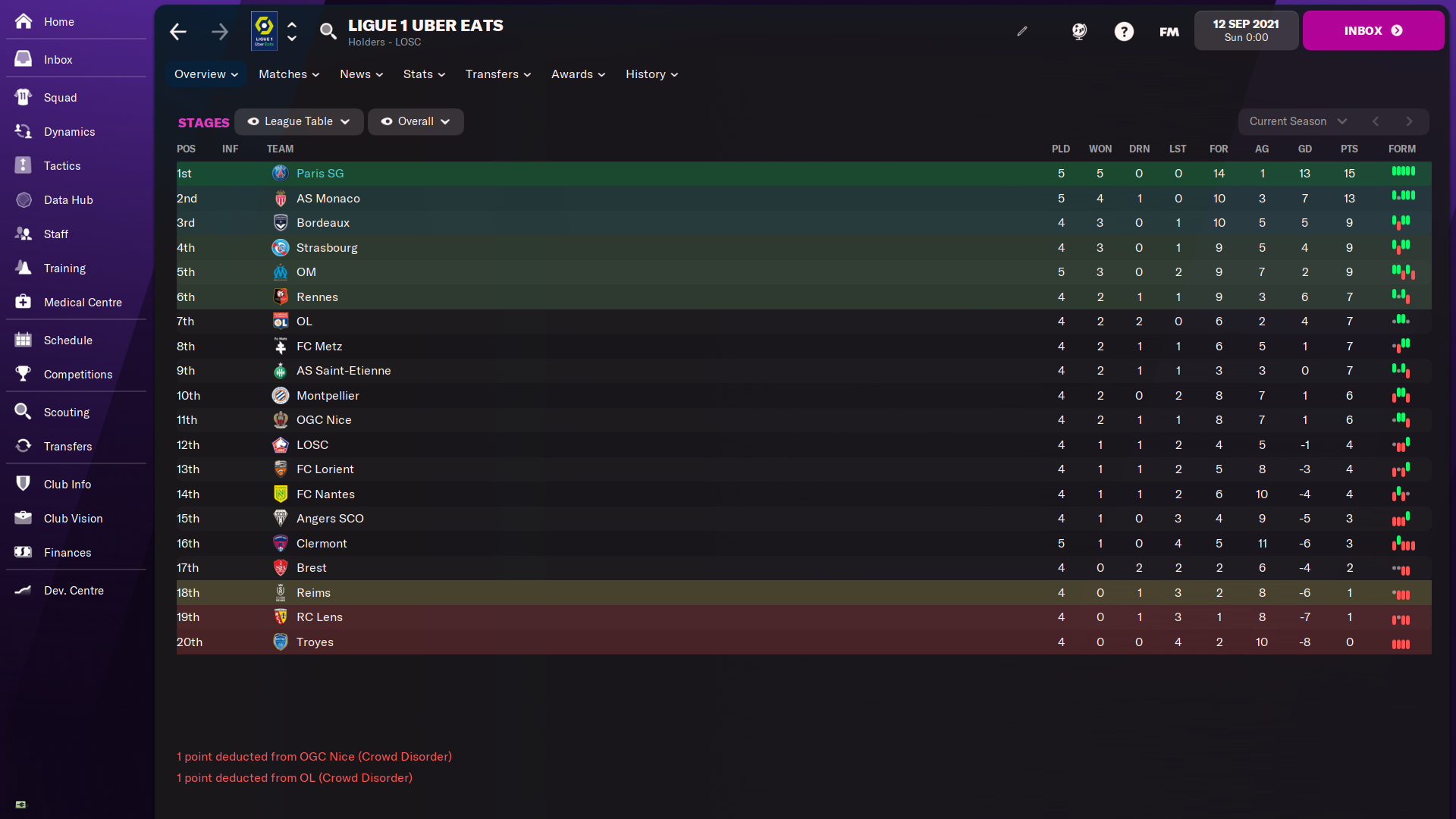 Core to Union Berlin’s remarkable rise over the last four years, Marvin Friedrich was one of several defenders on the move at the beginning of 2022, heading west to join Borussia Monchengladbach.

Friedrich has all the key attributes you look for in a commanding central defender: he’s tall, an aerial threat from set-piece, fairly mobile, is noted for his concentration and has the ability to play long balls forward.

He’s also the sort of natural leader that you can build a successful team around. Can he be a lynchpin for you in a successful assault on Bayern Munich’s dominance at the top of the Bundesliga? 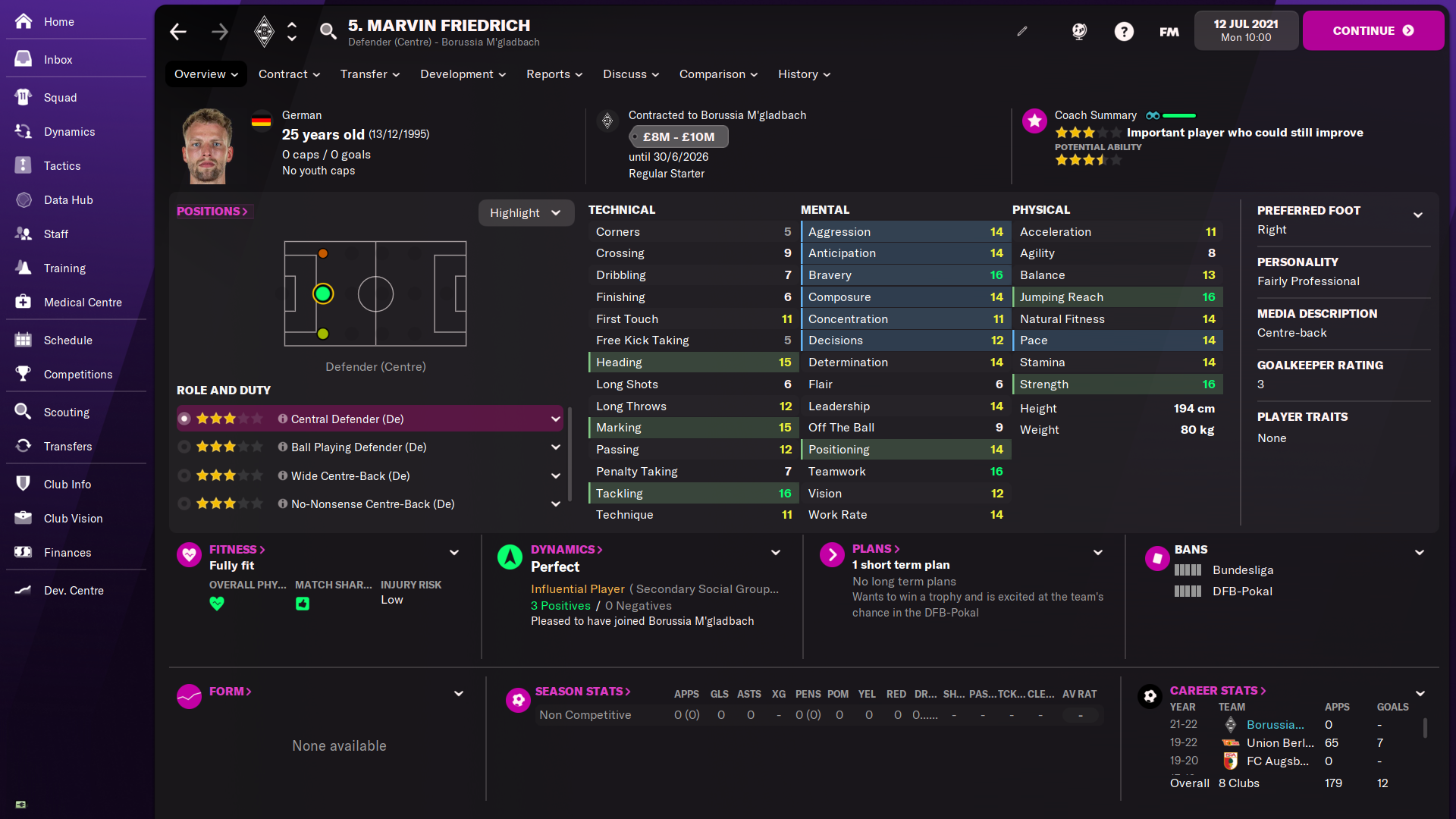 When coming through one of the best academies in England, Jonathan Panzo was very highly-rated by those in the know and was even a Wonderkid in a previous edition of Football Manager.

His big move to France as a teenager never really worked out but the 21-year-old was recruited, alongside Steve Cook, Canada’s Richie Laryea, and striker Sam Surridge, by Nottingham Forest to help with their play-off charge.

A left-footed centre-back who can also deputise as a left-back, this move looks perfect for the former England youth international Panzo to realise his true potential.

Celtic have been playing some excellent football this season and they now promise to be even better after making a number of exciting moves in January.

Reo Hatate and Yosuke Ideguchi complement their existing Japanese cohort but the move that excites us the most is the one they made for attacking midfielder Matt O’Riley.

The 21-year-old has been an FM wonderkids for several years now and he delivered on that potential in the first half of the season, recording five assists and seven goals in 26 games for MK Dons in Sky Bet League One. Now with one of Scotland’s most iconic clubs, he looks primed to form an exciting creative partnership with David Turnbull and Kyogo Furuhashi,

Get a tactic that clicks with all of them, and you’ll have a team that can reassert Celtic domestically and make them competitive in Europe.

We couldn’t finish without including one of our own, could we?

Self-professed FM fan Tony Watt had had a fairly nomadic career before settling down at Motherwell a couple of years ago. While he wasn’t always among the goals early on he worked hard and contributed massively to their overall play. This season he’s stepped it up a gear, hitting the back of the net 10 times in 24 games across all competitions.

That form earned him a move to Dundee United, who have impressed this season under young manager Tam Courts. Can you emulate what he’s been doing and go one step further, challenging the Glasgow duopoly at the top of the table, with an FM fan leading the line? You know you want to. 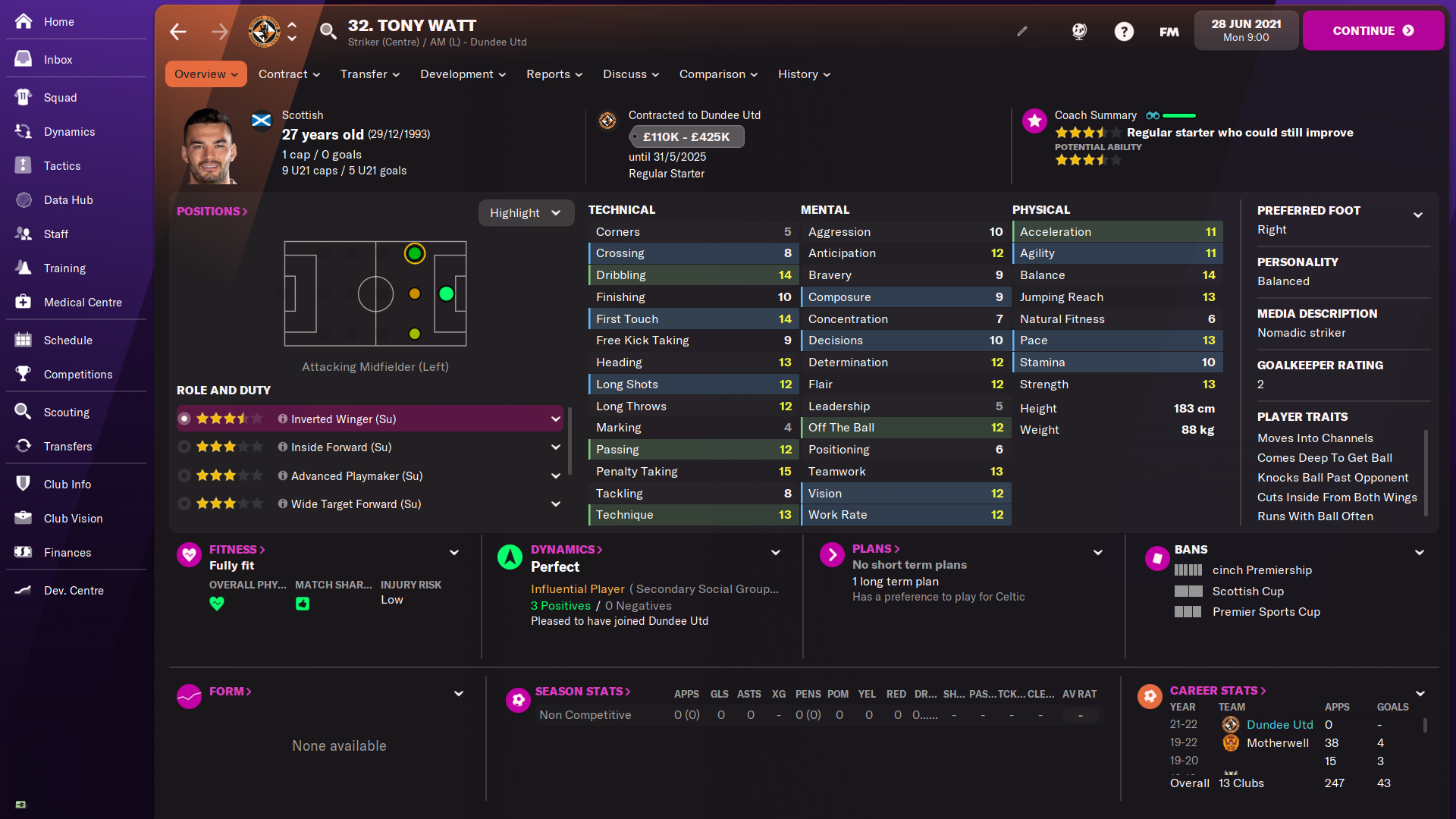 We hope you’ve enjoyed our list on intriguing moves from January. There were loads more that we didn’t include – we look forward to seeing you find and make the most of them in our Main Winter Update. Remember, you can always try a team out in a one-off match in the all-new Versus Mode, exclusive to FMFC members, to work out if they’re right for you in a longer-term game.