Building tactics around your best players in FM21

After choosing your new club in FM21, one of the first things you should do is identify the key players in your squad. When crafting a winning tactic, the number one rule is playing to your strengths. Invariably, your best players are going contribute to these strengths.

If you have one particularly impressive, clinical striker, it would be logical to build your tactic around this player. That involves arranging other players in supporting roles so that they can provide him service and act as decoys, opening up space for him to run into.

Alternatively, you might have an exceptional playmaker. In that case, you’d want him as the pivot around which all of your runners and attackers move. As such, the whole tactic needs to be created with your playmaking Enganche at its heart. Such considerations will invariably influence both the choice of the shape you employ and the other player roles in the starting XI.

Ihor Crusadertsar from Dictate the Game explains how to build a successful tactic around your key players. 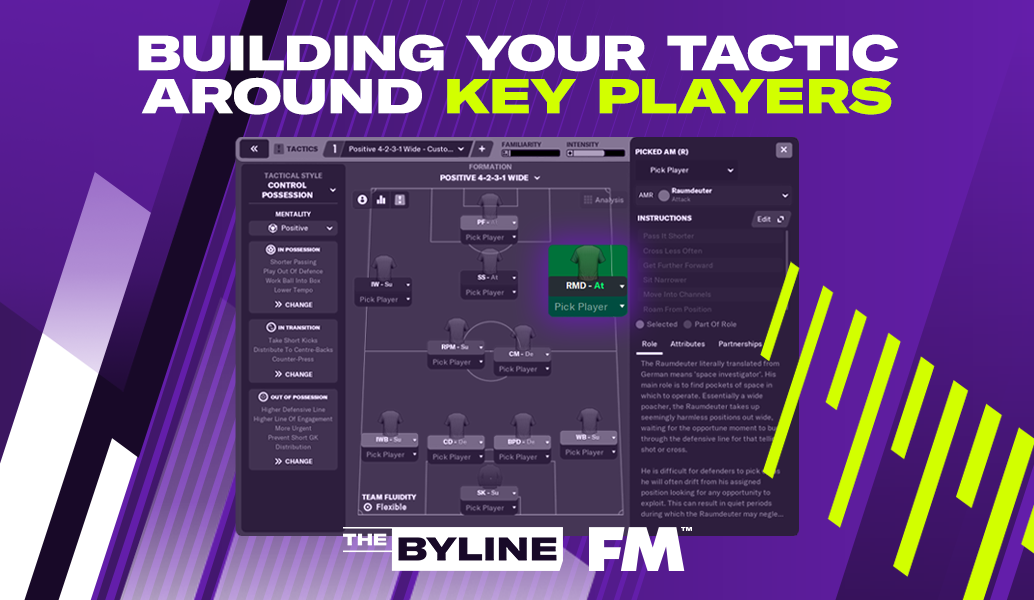 The difficulty level of this task will vary depending on the club you’ve chosen to manage. If you’re managing an ‘underdog’, you will have fewer elite players at your disposal. This will make choosing the key players much easier. However, if you’re managing one of the world’s best teams, every one of your first team players might seem like a key player. In cases like these, you must be a little more creative. Consider what makes your best player unique, what sets them apart as something that no other club has.

Once you’ve identified your key players, the natural next step is identifying which roles will get the best out of their Attributes. This is the trickiest part of the process, simply because some players can fit equally well into multiple roles.

The final choice should be dependent on your tactical goals. Is there a certain style you want to replicate or achieve? Are you someone who prioritises attacking fluidity or defensive solidity? Maybe you’ve decided that you want to build a tactic around a more exotic role, one you’ve never tried before. Whatever your preference, working this out in advance of putting the tactic together is important.

Personally, I like to find ways to break down compact AI defences; those dreaded parked buses. It’s a frequent dilemma for any club once their reputation increases enough to merit this kind of response from the opposition on a regular basis. At the same time, I’ve always wanted to find a tactic that can make roles like the Raumdeuter and Wide Target Man really shine.

I’ve taken over at AFC Bournemouth to illustrate how to identify the right players for these two roles, how they work together and how you can build your tactic around them.

If The Shoe Fits

Once you’ve identified the roles you want to use, the next question focuses on how you fit those players into a functioning, flowing tactic. Examine the player’s profile and usually the role that suits him best becomes apparent. It’s typically the one where his best Attributes stand out. I always suggest looking at the Attributes first rather than going by what the game suggests. This is for one simple reason: players with the attributes you are looking for might not even be natural in that position. You might have a great Wide Target Man in the making on your team without even knowing it.

One such potential Wide Target Man is Dominic Solanke. The game labels him as a natural striker, best served playing through the middle as a Pressing Forward. But, as you can see, Dominic has all the right attributes to succeed as a Wide Target Man. He is also still young enough to really grow into his new role with some dedicated retraining. 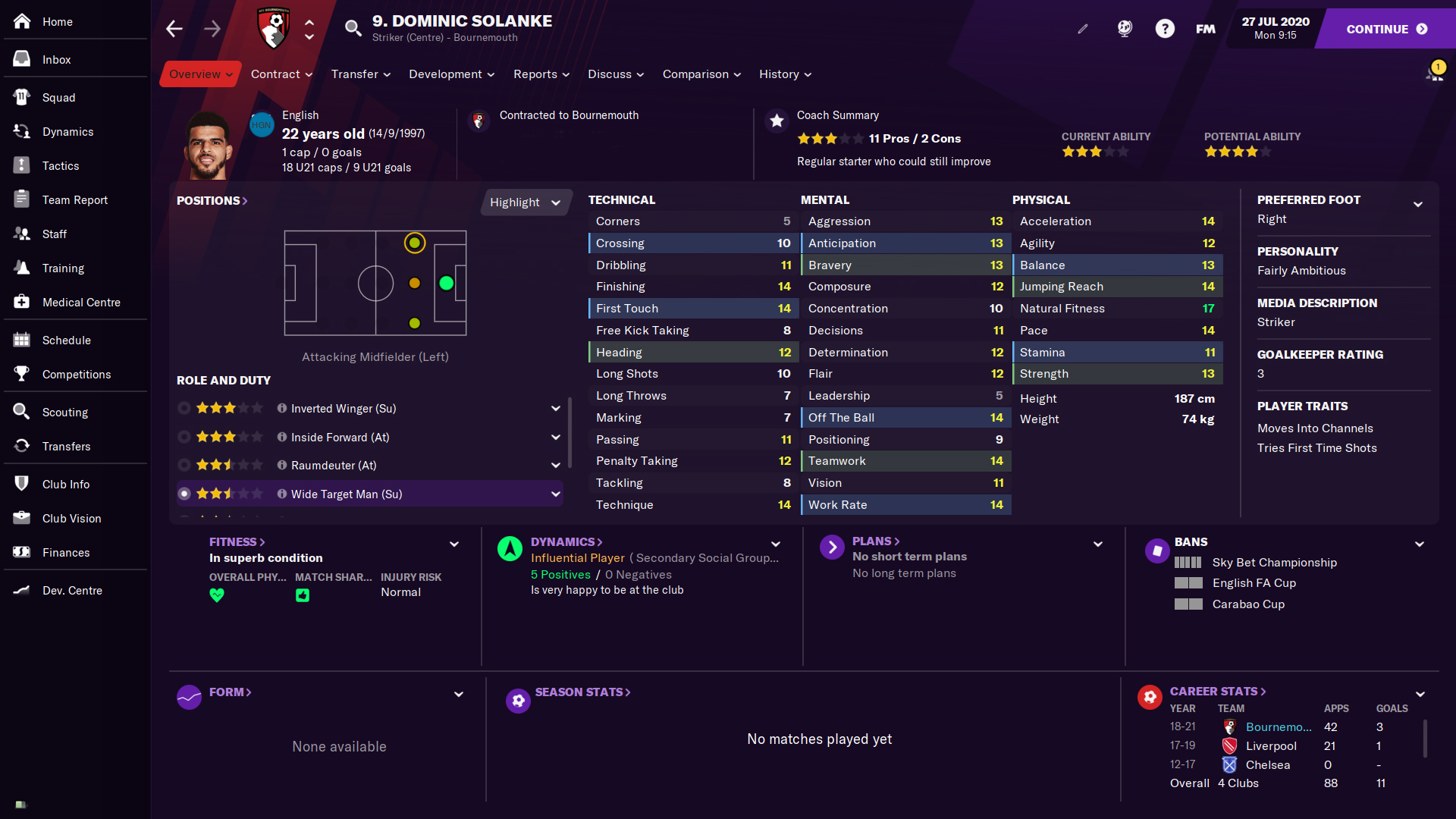 So, how can we start building our tactic around Dominic?

What I love about this role is that it is a perfect pivot. He can hold up the ball and allow the rest of the attack to flow around him. That makes it a great example of how you can craft your tactic around one key player. There are a few disadvantages, however.

Firstly, it can be difficult to find suitable players to work as a Wide Target Man. It’s a role with quite specific Attribute and Trait requirements. You cannot just insert a traditional Target Man into the role and expect him to perform well. Indeed, a Wide Target Man needs a lot more Technical skill to operate on the wing – he will be expected to cross the ball and tackle full-backs to regain possession. He’ll also need decent Acceleration, Pace and Off The Ball, since he’ll traditionally start out wide before moving into the channel. But, at the same time, he won’t be expected to regularly beat opposition players with his speed so he doesn’t need to be rapid. Jumping Reach, Balance, Strength, and all the other attributes needed for a central Target Man are still important.

In terms of Traits, my advice is that more aggressive traits like ‘beat the offside trap’ and ‘get into opposition area’ are discouraged, while ‘plays with back to goal’ or ‘comes deep to get ball’ are highly encouraged.

Given the criteria we’ve outlined, it’s not surprising that the Wide Target Man could be someone you want to build the rest of your tactic around. Any good tactical system needs a counterweight though and this is where our Raumdeuter comes in.

Whereas the Wide Target Man excels at creating an overload by attracting the opposition to their flank, the Raumdeuter is best at operating in the gaps created by the opponents shifting elsewhere (such as dealing with the havoc created by your Wide Target Man).

The name Raumdeuter literally means ‘space investigator’ in German. As such, here you will need a player who is very adept at finding open space (Anticipation, Decisions, Off the Ball) and fast and nimble enough to find his exploit the gaps he finds. So, he will need very good Acceleration, Pace, Balance and even Work Rate to run the channels towards the opposition goal. 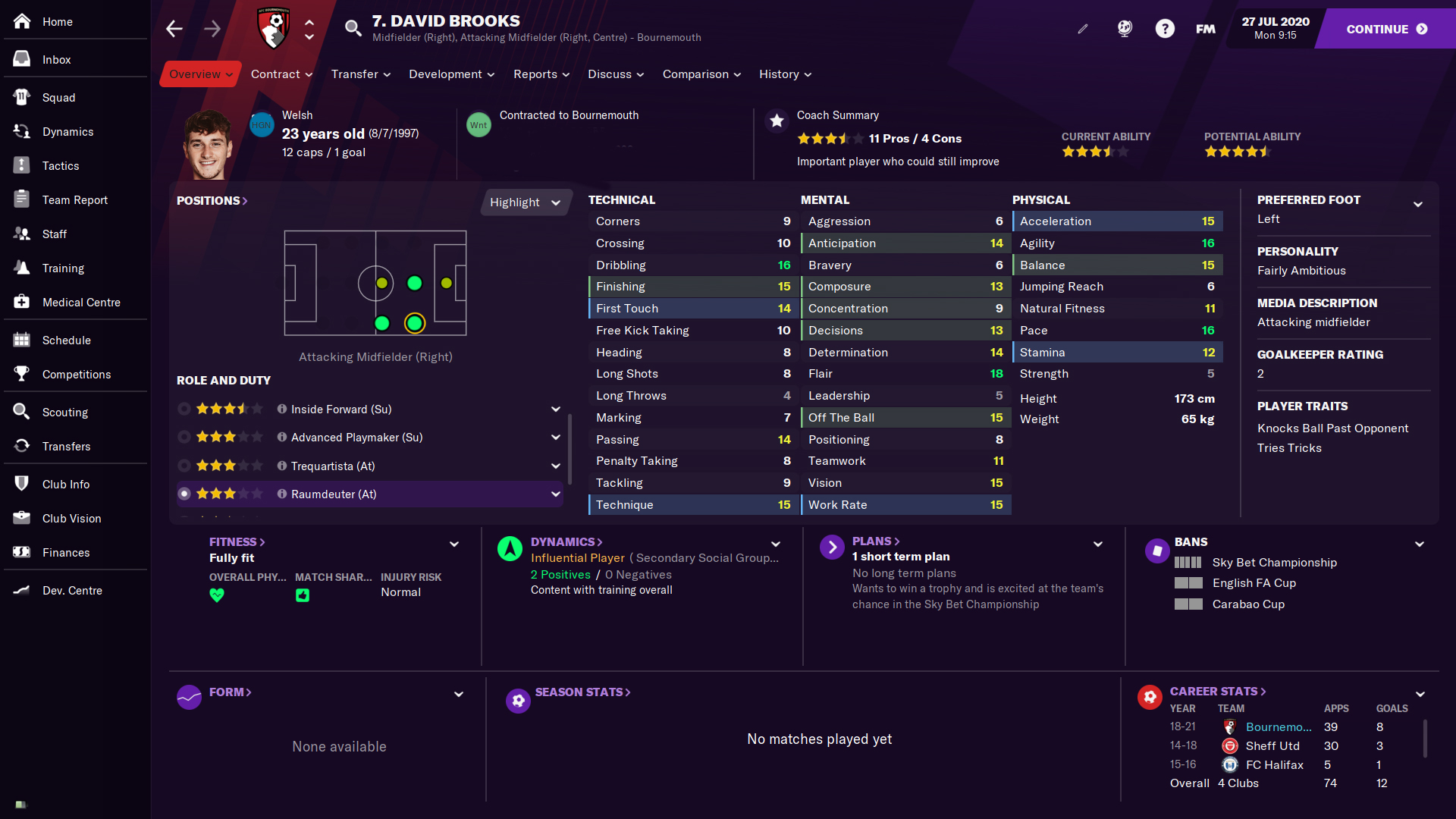 The reason I chose Bournemouth as my example team was partly because they also have a young player who can be developed into a very capable Raumdeuter. David Brooks is a great, versatile player and his natural skill as a winger gives him the necessary spatial intelligence to excel as a ‘space investigator’.

Once I’d identified the two key roles I wanted to utilise, the focus switched to building the full tactic to get the most from them. As I mentioned before, one player will create an overload on his side, allowing your other key player, the Raumdeuter, to spot the newly created space on the opposite side and take advantage of it. It’s a rather simple, one-two punch combination play. Or, it is at first glance, but, they will only thrive if you set up the rest of your tactic correctly. 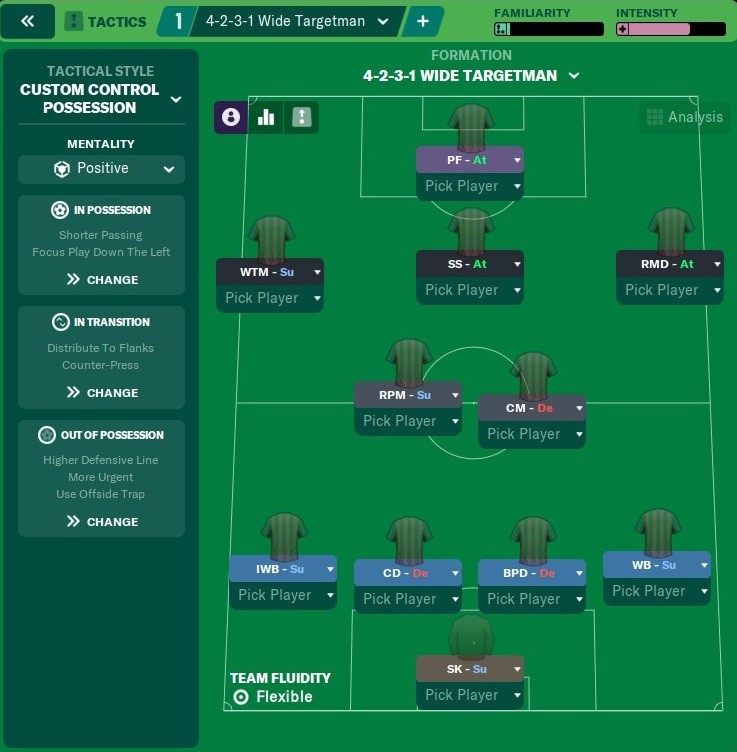 Looking at the roles around my Wide Target Man, you can see two other support duty roles. One of them is the Roaming Playmaker. There is a very good reason for this. Support duties, and especially playmakers, are basically instructed to retain the ball and pass it between each other. If they possess good Passing, First Touch, Composure and Balance, they can be good at keeping possession in their general area.

Combining this ball retention skill with the natural instinct of the Wide Target Man to be a ball magnet, and the ‘Focus down the left’ instruction we’ve selected, you are almost certain to create regular overloads on the left-hand side. This means that our build-up play starts on that flank and the players will try to keep the ball there. Naturally this will attract the opposition, resulting in an overload.

Having good passers in the team with key traits like ‘switches play to opposite flank’, ‘try long passes’ and ‘try killer balls’ will help to quickly switch the ball to the opposite flank where there is now more open space. On that flank we have the Raumdeuter and Wing-Back operating close together. They are ready to pounce on any openings in the opposition defence.

That’s my simple ‘Overload and Exploit’ tactic, showing you how to get the best from your key players. Hopefully it can make these two less popular roles shine in your team as well. Wherever your best players lie, understanding their strengths and best roles early on gives you a better chance of hitting the ground running in your latest save.