Featuring countless international superstars, the Bundesliga is one of the world’s best leagues. It’s also become home to many of football’s brightest wonderkids, which has unsurprisingly made it incredibly popular with Football Manager players. We’ve delved into the stats to put together the most signed XI of players currently playing in the Bundesliga in FM22. 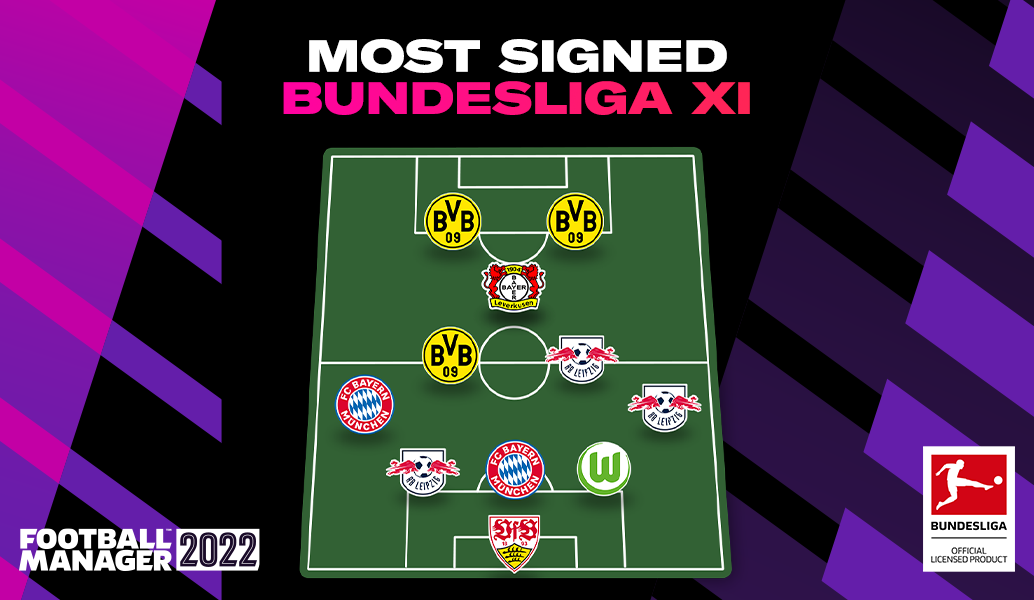 Between the sticks is the division’s youngest regularly starting ‘keeper, Stuttgart shot-stopper Müller.
A summer signing from 1. FSV Mainz 05, Müller has continued to mature this season and establish himself as one of the league’s best. These abilities are reflected in FM22, his biggest strengths being his tendency to Rush Out and his Mental Attributes. With such a strong profile and further potential for growth, it’s no surprise that so many FM22 players have snapped him up.

Looking at the data, it was clear that one of the Bundesliga’s areas of greatest depth was in central defence. Most popular of the lot is Josko Gvardiol, an almost ever-present for RB Leipzig this season. It’s easy to see why.

Aged just 19 at the start of your FM22 careers, the Croatian international is a strong, aggressive and mobile player equally comfortable at left-back and centre-back. His strong Dribbling and Passing skills also make him perfectly suited to the new Wide Centre-Back role introduced this year.

Unsurprisingly, he’s the first of several Wonderkids in this XI…

Taking up the central role in our back-three in FC Bayern’s French defensive prodigy, Tanguy Nianzou.

As a starting point, Nianzou’s 16 Jumping Reach and 15 Heading make him the sort of dominant aerial presence that can thwart opposition attacks and contribute offensively from set-pieces.

Confident with the ball at his feet, he has all the tools to become a world-class Centre-Back. It’s no wonder so many of you have been building your backlines around him.

The right-hand defender in our defensive unit is Nianzou’s countryman, Maxence Lacroix.

In addition to also being a tremendous aerial threat, Lacroix’s biggest selling point in FM22 is his raw speed – he boasts 18 Pace and 16 Acceleration. Bolstered by decent Dribbling, the Frenchman is another one ideal for managers looking to taste success with the WCB role. 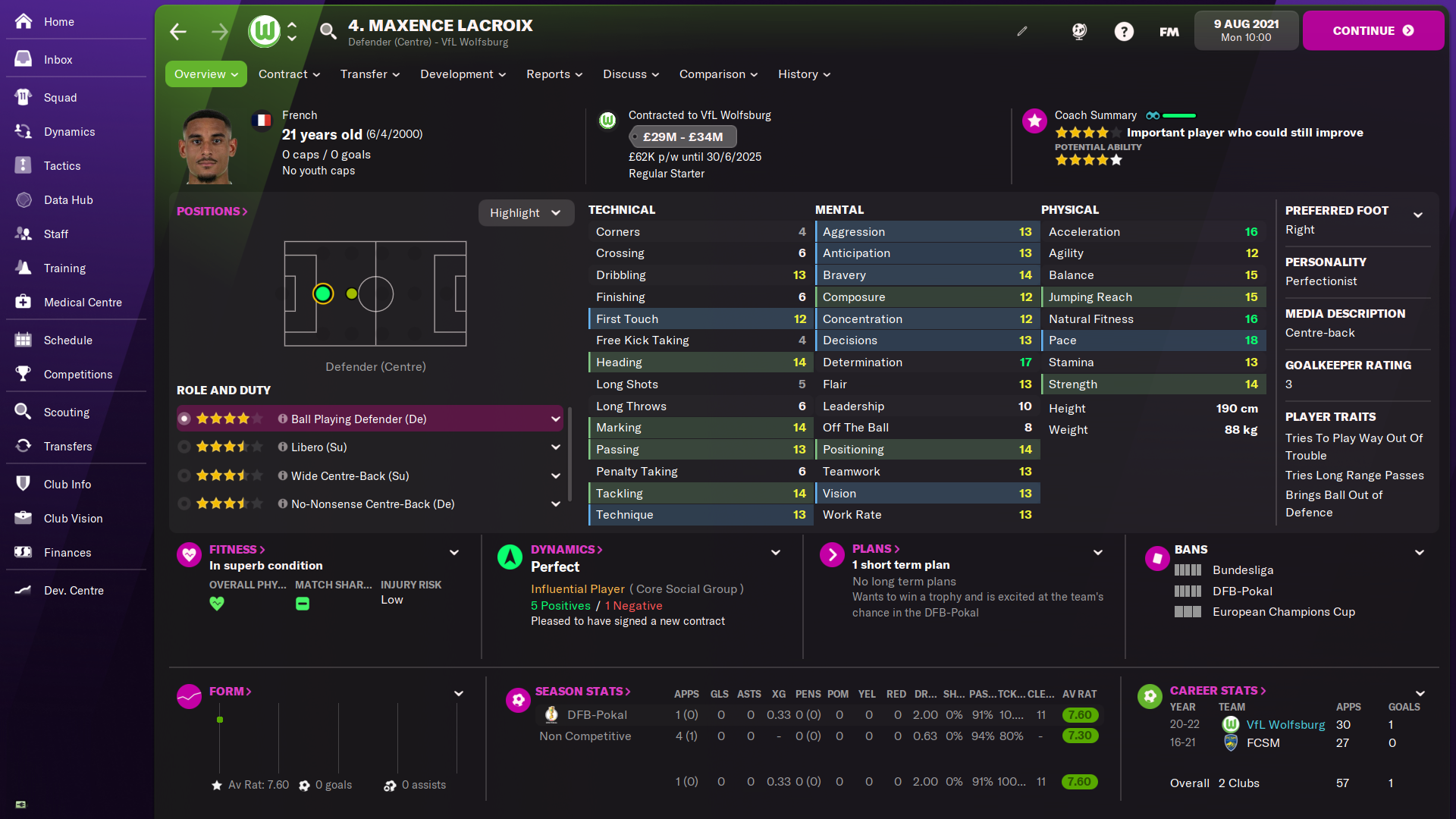 After starting his career as a left-winger, Davies has found his niche in recent years as a rampaging Wing-Back and it’s fair to say that the Canadian international is now a worldwide superstar.

Davies is one of the fastest players in FM22 with a score of 19 for both Pace and Acceleration and is at his happiest running with the ball of his feet. Capable of real trickery out wide, he’s almost a guarantee to beat his opposite number every time and get service into the area.

Although not quite as rapid as Davies, France’s Nordi Mukiele still offers a real attacking threat as a right Wing-Back.

What’s made the RB Leipzig man such a fan favourite in FM22 though are his defensive skills – he boasts strong Attribute skills for Marking, Tackling, Bravery and Anticipation. He’s also one of the best in the air in his position, ensuring that he doesn’t get caught out by long balls over the top.

It’s crazy to think that at just 18 years old, Jude Bellingham is already one of the world’s best midfielders.

A passionate individual, he’s the sort of player that will cover every blade of grass in 90 minutes and leave everything out on the pitch. Every manager craves commitment like that.

Putting it bluntly, Bellingham is good at almost everything, with his standout Attributes being Determination (18), First Touch (15), Bravery (18), Stamina (16), and Dribbling (15).

He also loves a late run into the area and with 13 Finishing, we’re sure he’s been a regular source of goals for many of you throughout FM22.

RB Leipzig’s squad is a Who’s Who of Europe’s up-and-coming young talent and one of their more recent star additions is Hungarian international Dominik Szoboszlai. 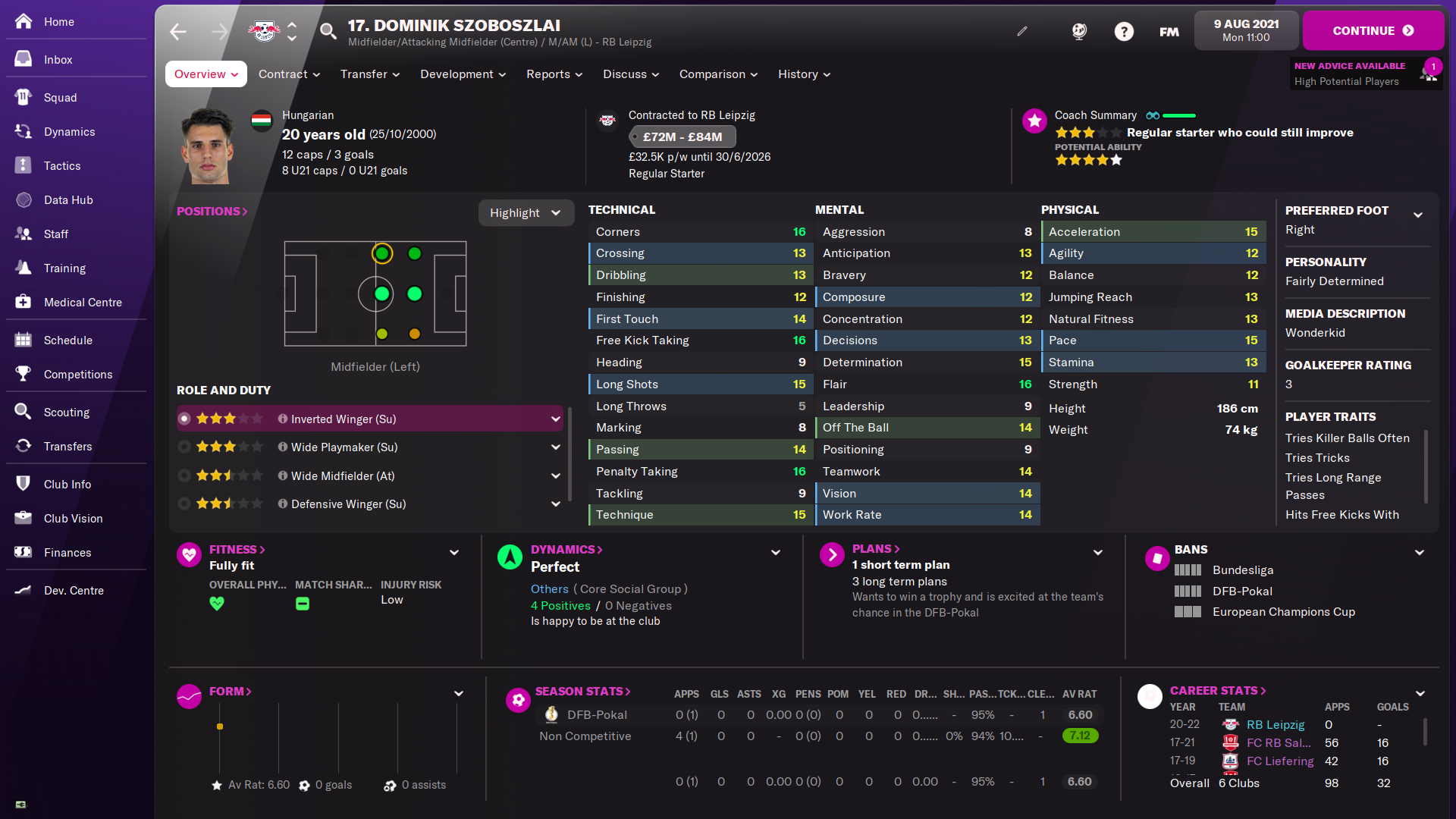 While Szoboszlai’s skills as a set-piece specialist are the immediate standouts from his FM22 profile, on closer inspection it’s clear that there’s so much more to his game than that.

Full of skill, Szoboszlai is good as both a playmaker setting the tempo as he is as a Mezzala bursting into the box and scoring goals.

Sitting at the top of our midfield three is Bayer Leverkusen’s latest starlet breaking records for fun – Florian Wirtz.

The 18-year-old’s seven goals and 10 assists from 24 games in real life have seen him attracting attention from many of Europe’s top clubs. The FM22 data shows you’ve all been taking a keen interest in acquiring his services as well. 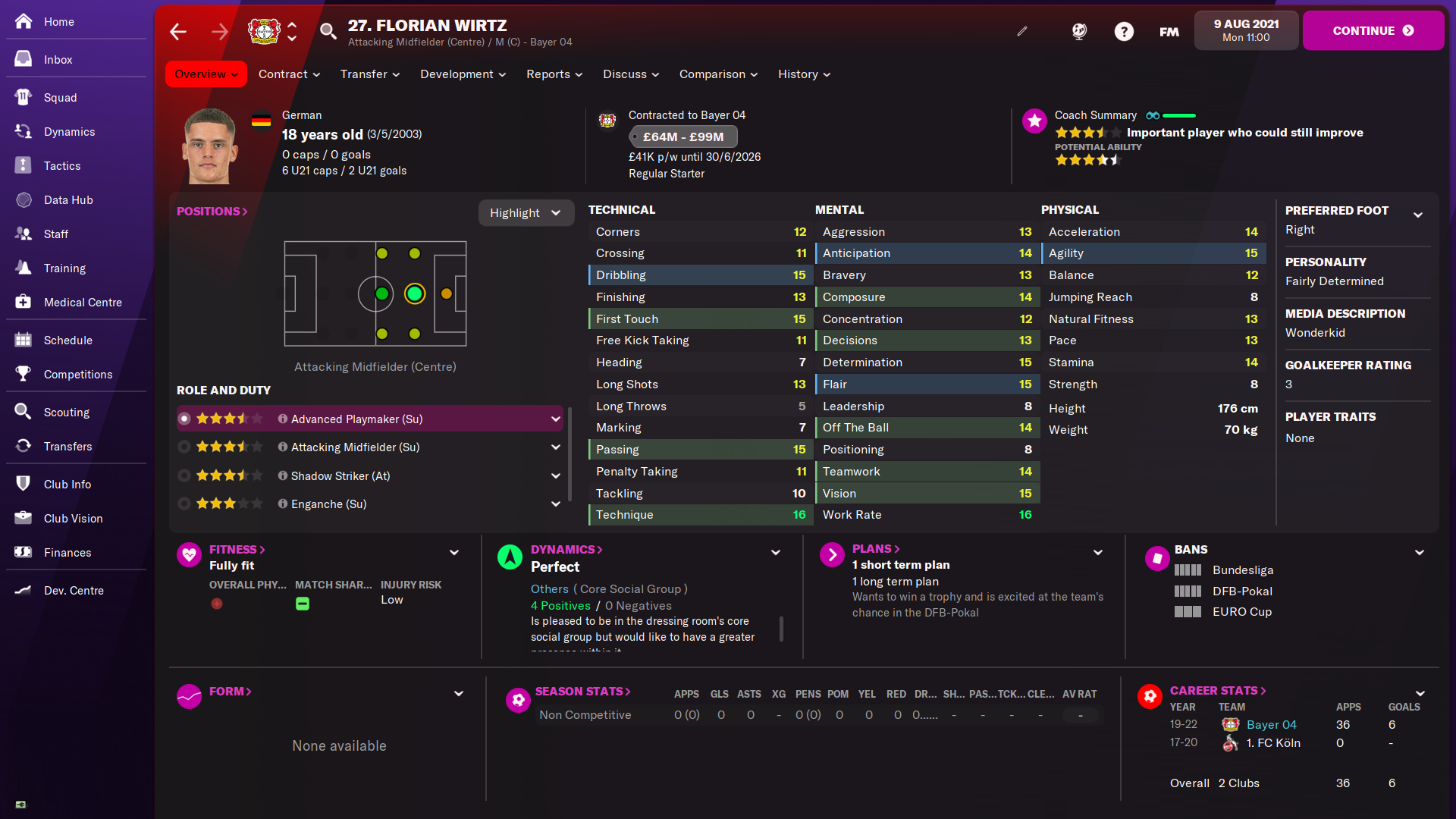 Already gifted with fantastic Flair, Vision and First Touch, Wirtz is the sort of creative dynamo every manager wants to craft their teams around.

He was always going to feature at some point, wasn’t he?

Erling Haaland has been enormously popular in Football Manager for a few years but in FM22 he feels like a cheat code.

An enormously driven individual, Haaland is tall, strong, incredibly quick and blessed with the most naturally instinctive finishing ability. The scary thing about it is that all of that is years before most players are at the peak of their powers, so he’s only going to get even better.

His stellar Attribute scores for Off the Ball, Anticipation and Composure ensure that he’s always doing the right things at the right time. He’s scored 16 and created another seven in the league this season in real-life but we’ve seen some of the unreal heights you lot have achieved with the Norwegian in the virtual world.

A teammate of Haaland’s, 17-year-old sensation Moukoko was another obvious name to emerge when we began to digest the data. 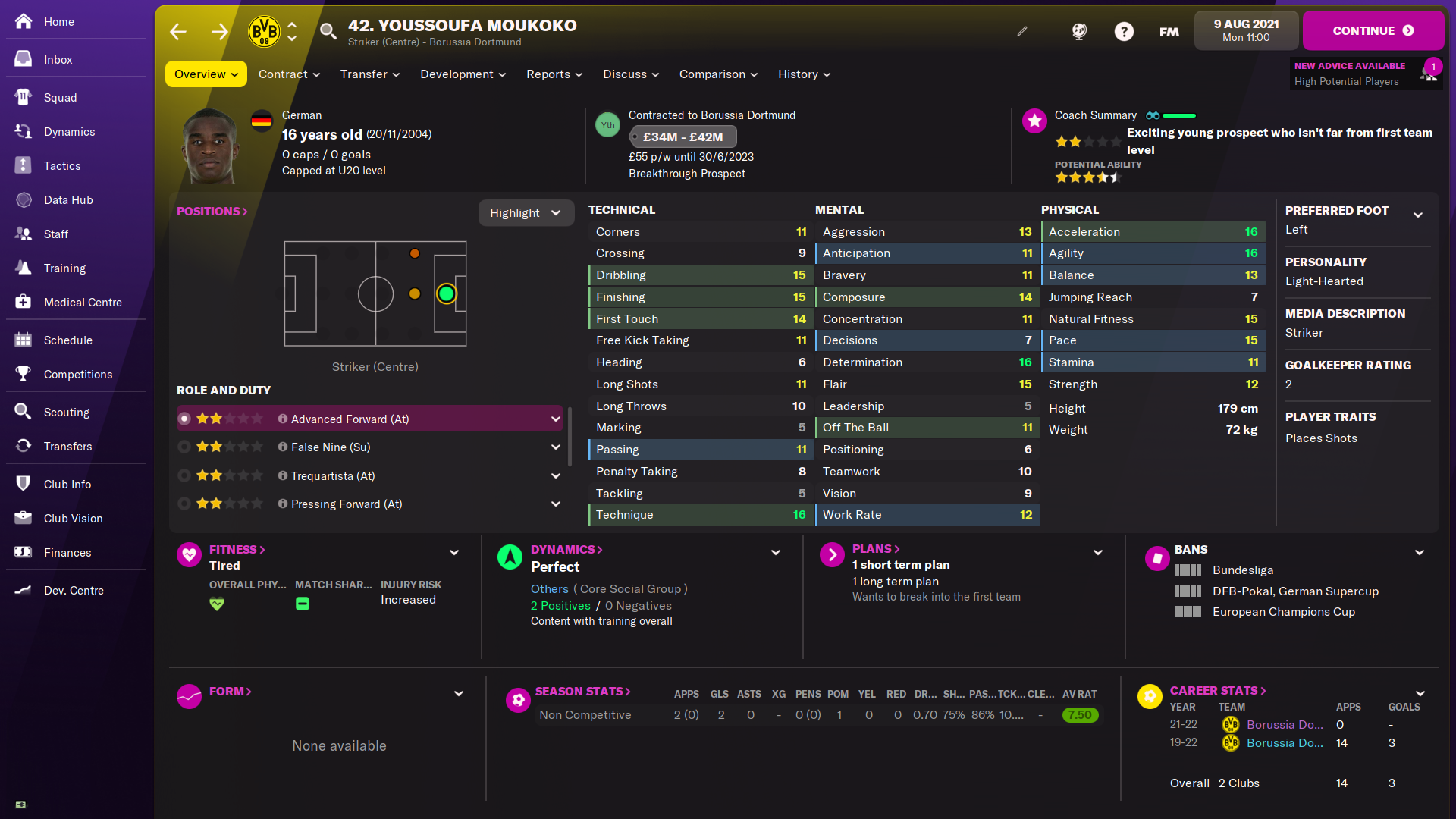 Left-footed, he’s an agile forward who is already rated as having 15 Finishing at the age of 16. While it’s unlikely that he’ll quite match the astronomical goalscoring records he set in the Dortmund youth teams in the senior ranks, he’s got the potential to do it all in the sport – as you’ve all proved in FM22.

No team is complete without a high-quality subs bench capable of turning a game on its head. Here are a few names who narrowly missed the cut but have been enormously popular with you all in FM22: 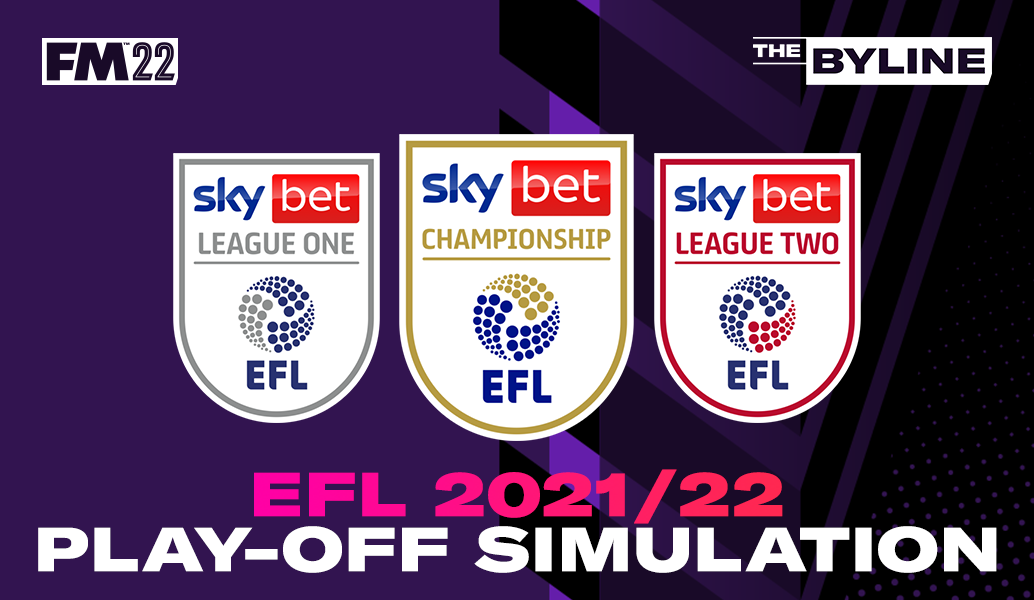