A guide to the Canadian Premier League in FM20

We are delighted to welcome the Canadian Premier League (CPL) to Football Manager 2020 as an officially licensed league, available to download, for free, from the Steam Workshop.

For the DLC bundle - Visit the Steam Workshop 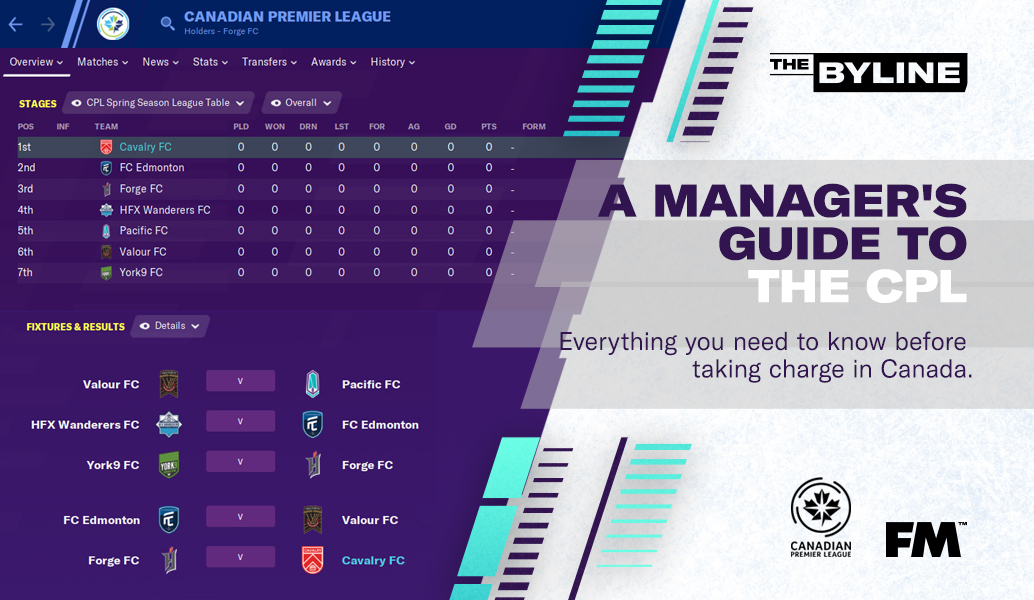 Much like in Mexico and many other countries in South and Central America, the league season is split into two parts – a spring campaign running from late April to Canada Day (July 1st) and a fall campaign from a few days later to early November.

The winners of each campaign then meet over two legs to determine the overall champions. Should the same side win both campaigns, they will meet the second-best side overall across the two mini-seasons.
Every game in a match weekend is staggered so that each match can be given broadcast coverage.

All 7 CPL clubs also participate in the annual Canadian Championship alongside the three Canadian teams in the MLS (Montreal Impact, Toronto FC and Vancouver Whitecaps) and the champions of two regional Canadian leagues. 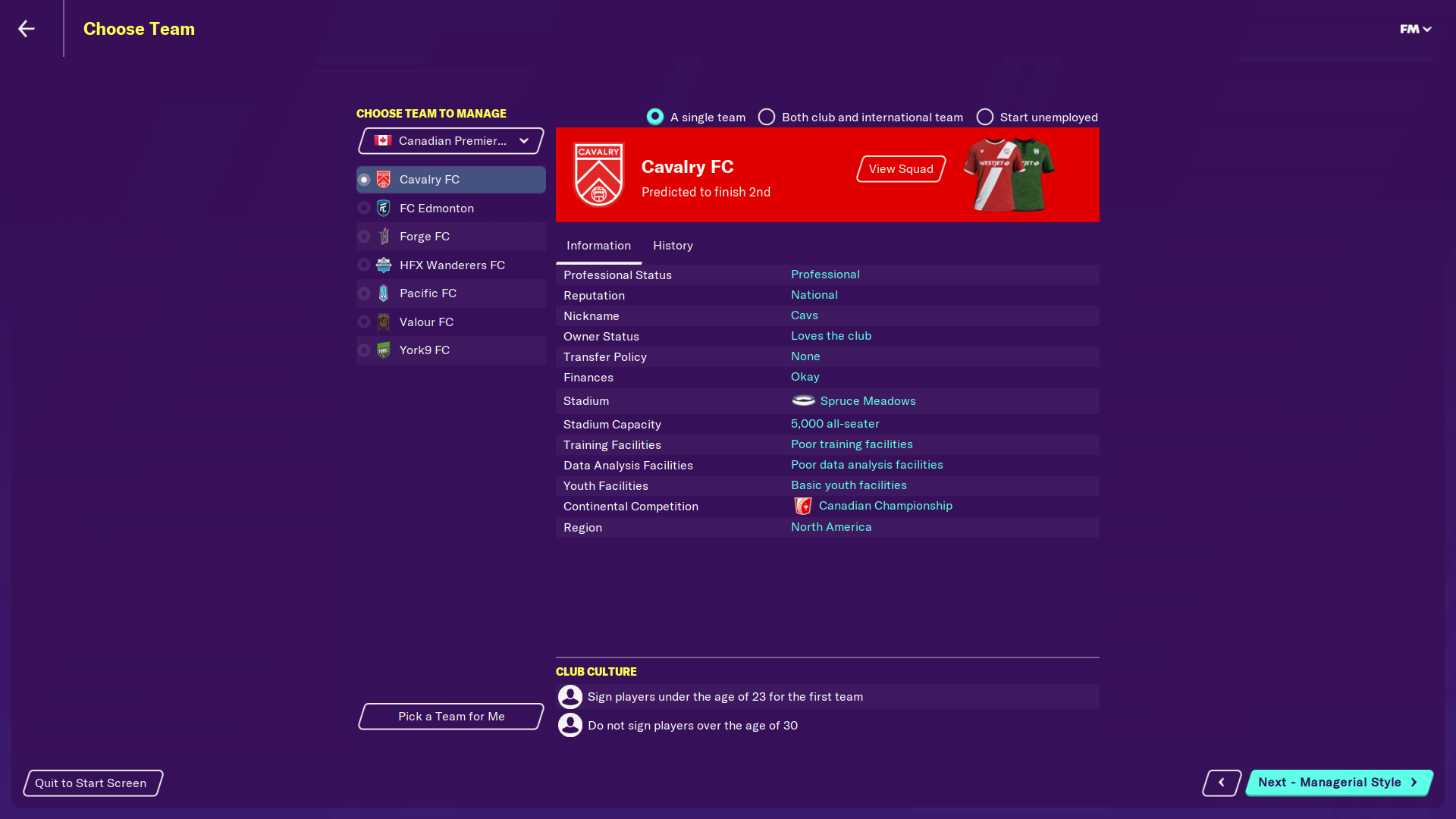 The 2019 Final was won by Forge FC, who are based in Hamilton, Ontario, with the province also represented by York9 FC from Toronto. The two clubs are separated by just 70 kilometres (km) and they battle each other in the 905 Derby.

FC Edmonton contest the Al Classico against fellow Alberta side Cavalry FC, who won both mini-seasons in the inaugural CPL season before falling short in the final. 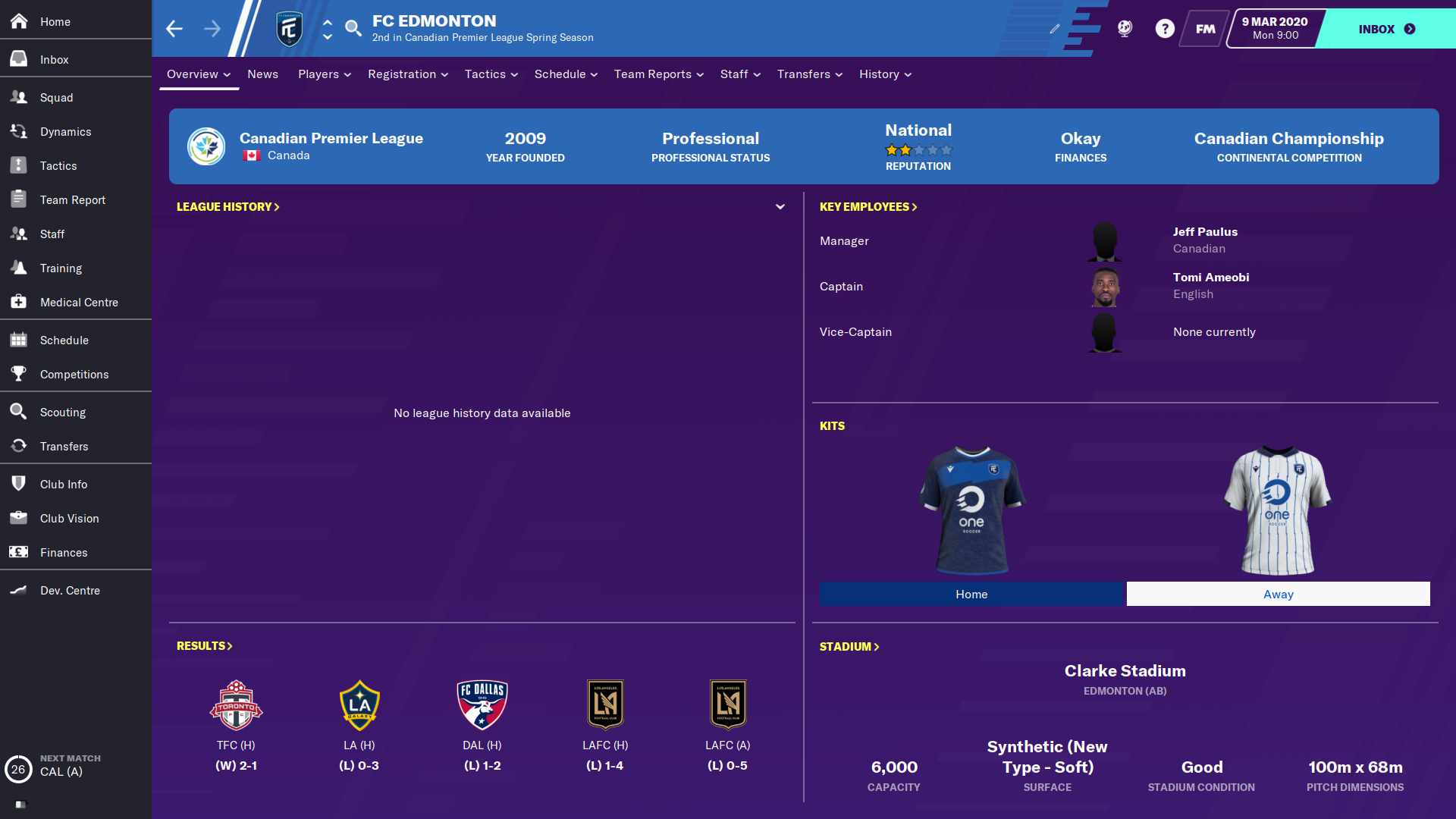 They contest the Al Classico against fellow Alberta side Cavalry FC, who won both mini-seasons in the inaugural CPL season before falling short in the final.

The final was won by Forge FC, who are based in Hamilton, Ontario, with the province also represented by York9 FC from Toronto. The two clubs are separated by just 70 kilometres (km) and they battle each other in the 905 Derby. 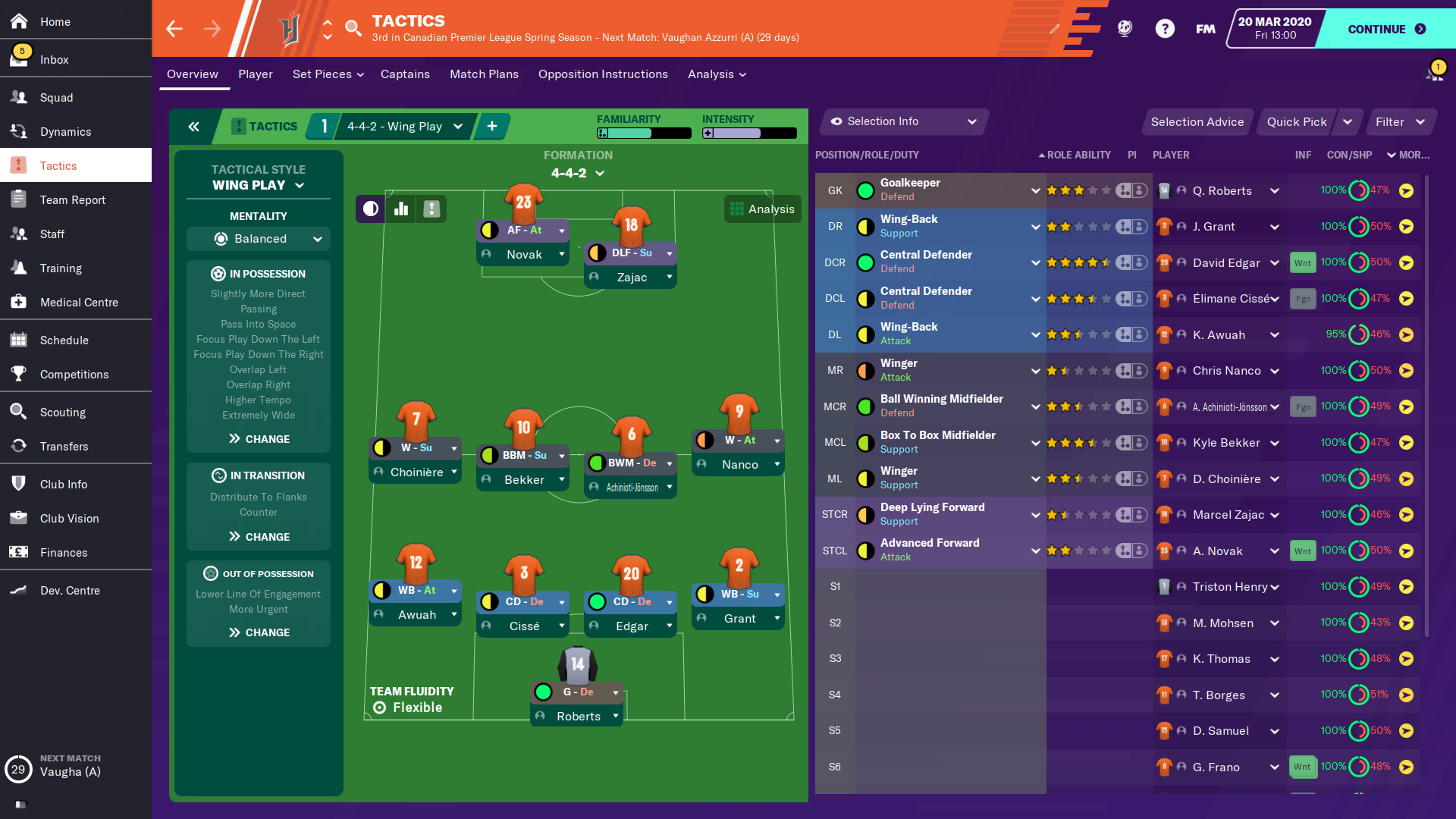 Nova Scotia, British Columbia and Manitoba provide the teams that complete the league in the shape of HFX Wanderers, Pacific FC and Valour FC respectively.

Matches between Pacific FC and HFX Wanderers FC require the third-longest road trips of any domestic professional football league in the world, with the two teams separated by 4,476 km. 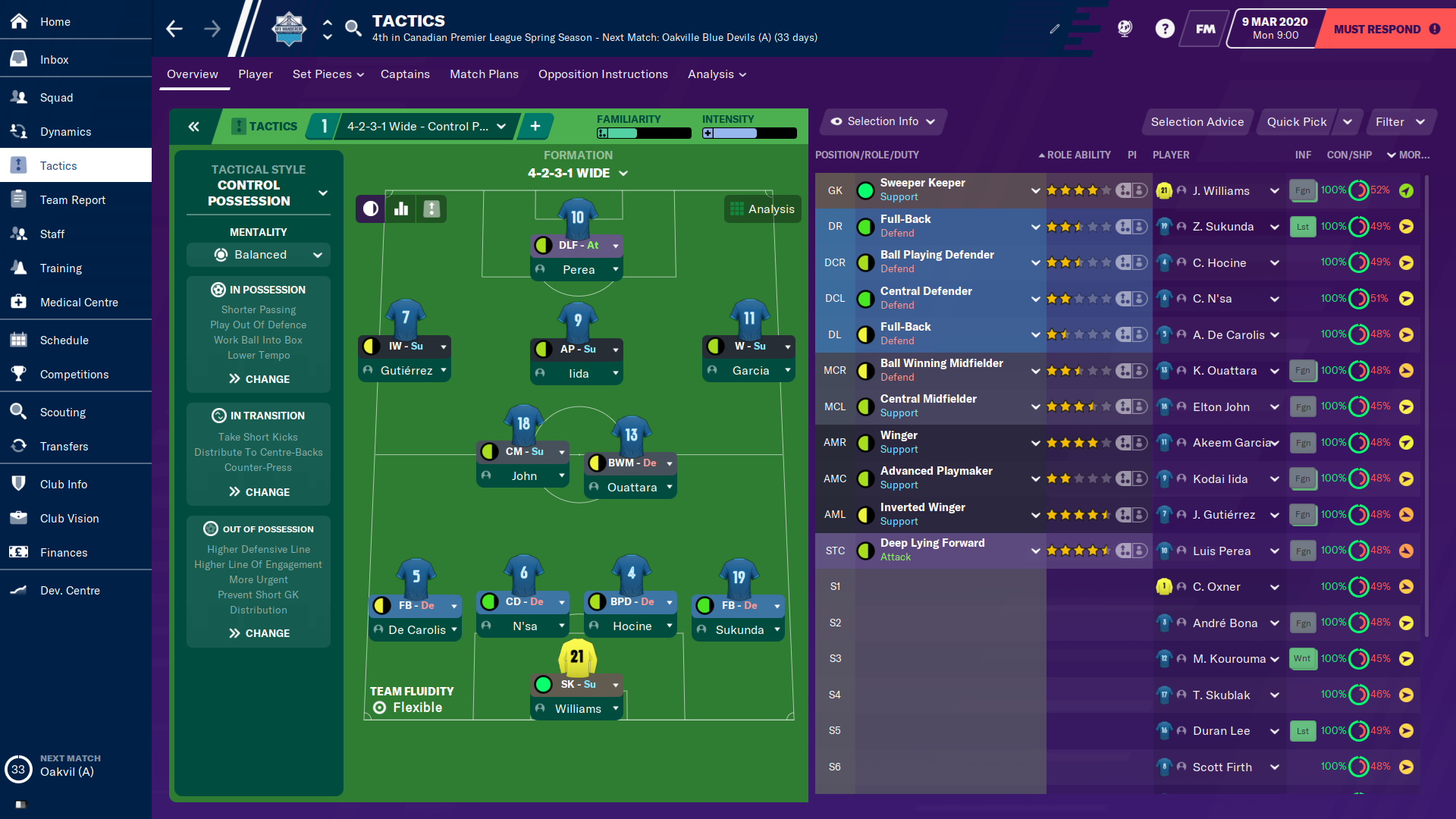 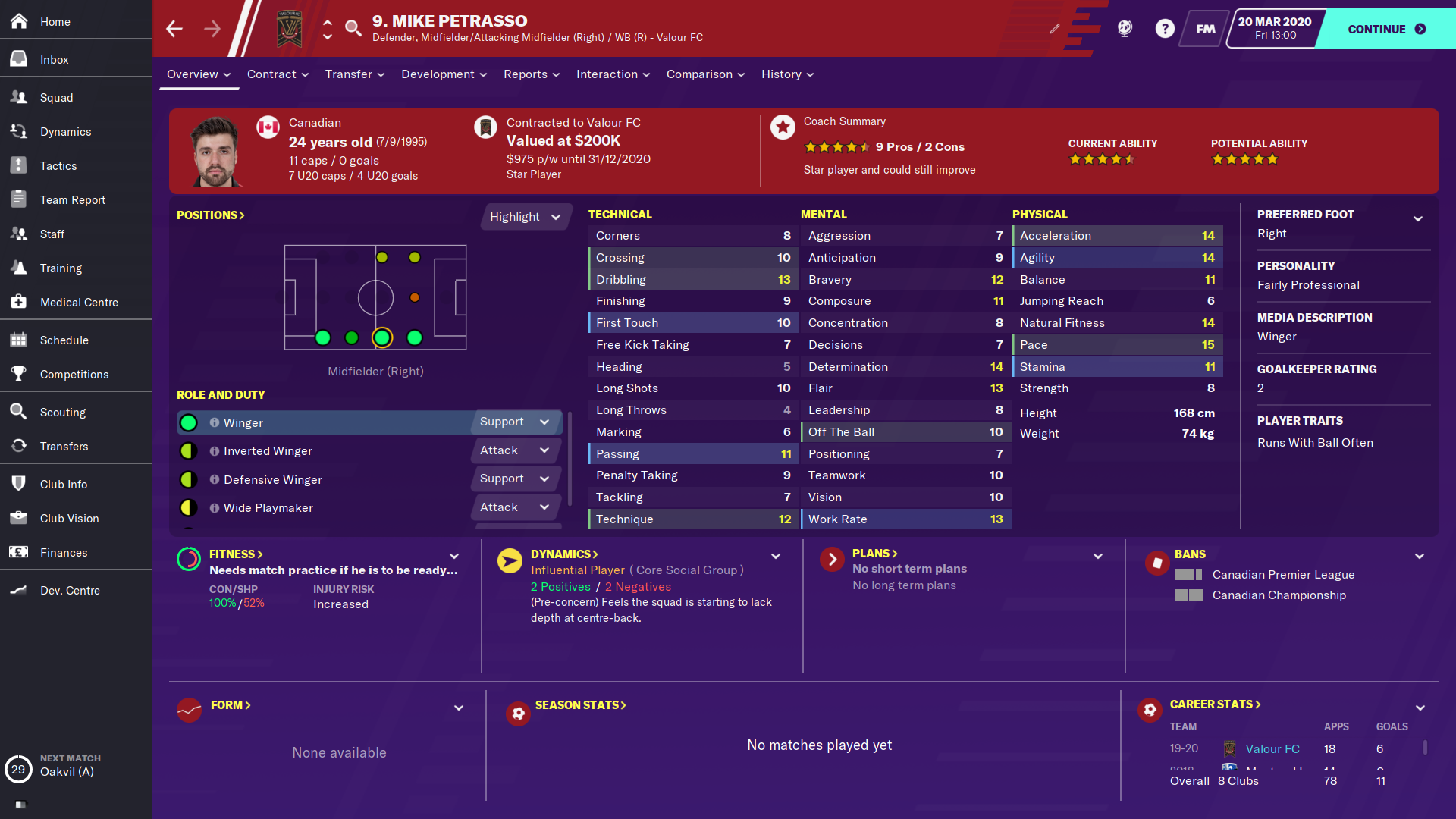 Unlike the MLS, the CPL is a club-based system, where each team is an independent member of the league. However, the CPL is somewhat like the MLS in that it has several rules that make the league unique. Most of these rules are designed to help further the growth of the game in Canada.

All seven clubs in the CPL must comply with a strict salary cap and although the league differs from the MLS in that there is only one type of contract in-game for you to offer players. This will require you to keep an eye on how much you are spending and whether you want to opt for a big squad that allows you to rotate or a smaller squad with more star names.

CPL sides can only have a maximum of seven international players in their squad and only five of those can be included in your playing XI at any point in Football Manager 2020.

In order to foster development of Canada’s young domestic talent, three of the Canadian players in your squad must be under the age of 21 and over the course of a season they must be complete at least 1,000 combined minutes. If this requirement is not met, you will be hit with a $10,000 CAD fine from the league.
There are two transfer windows in the season, the first running from mid-February to early May and the second from early July to early August.

With only seven clubs to choose from at the moment, each of them is worth trying on Football Manager 2020 as you look to explore the newest addition to the game.

Could you guide Forge FC to back-to-back title triumphs? Or will you opt to help Cavalry FC get over their heartache of coming so close in the league’s inaugural season?

HFX Wanderers were unable to convert high league attendances into results in 2019 – can you put your managerial skills to the test and get the Wanderers Ground rocking?

A big challenge, wherever you decide to set your stall out, will be to make your way through the rounds of the North American League to mix it with the continents best in the Champions Cup.

Whoever you choose to manage, happy managing in North America’s newest domestic league!