The English Football League (EFL) is one of the UK’s best breeding grounds for talented young footballers. EFL clubs are typically keen to give academy prospects first-team opportunities earlier than those in the top-flight, allowing them to gain valuable experience and accelerate their development.

Many of those EFL young stars will be popular transfer targets in Football Manager 2023. Here, we’ve worked with our Research team to produce a definitive list of the best.

Emre Tezgel entered the headlines in January 2022 when a cup substitute appearance made the teenage sensation Stoke’s youngest-ever player.

Eligible for both England and Turkey internationally, Tezgel’s performances at youth level have shown him to be a natural finisher with the instincts of a classic Poacher.

Still very young, in fact the youngest player on this list, FM23 players will have a fun job on their hands developing Tezgel and turning him into a world-class finisher. 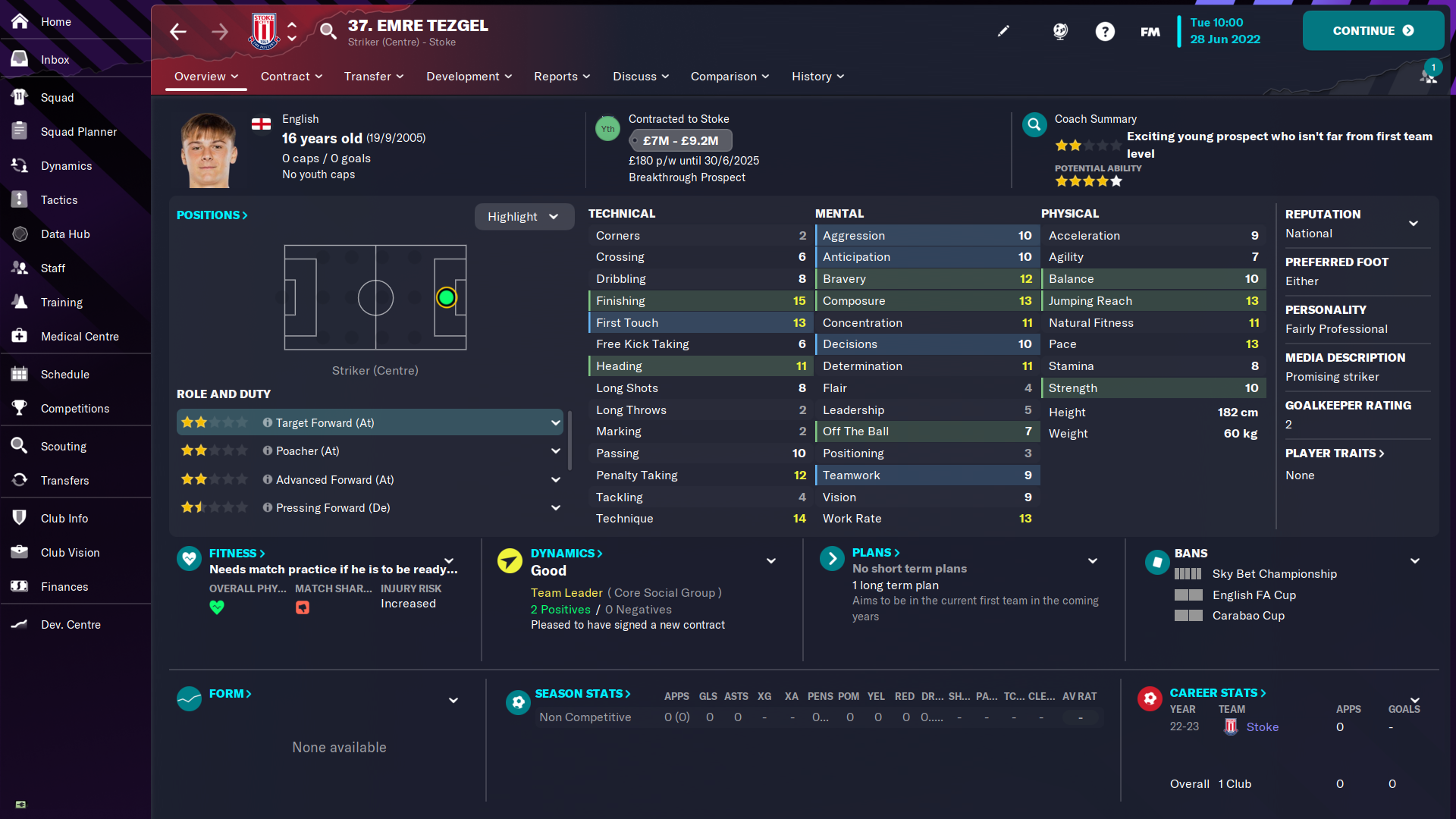 Watford’s main goal this season is securing promotion back to the top flight and if they’re to be successful, young striker Joao Pedro will be a key performer.

Capable of playing anywhere across the forward line but at his best up front, the Brazilian has recorded six goals and two assists in 16 Sky Bet Championship games so far this season.

Strong and skillful, Pedro has all the tools to become a lethal number nine in FM23 and spearhead attacks at the very highest levels.

Highly rated in his native Colombia, the exciting Yaser Asprilla has been an almost ever-present for the Hornets since linking up with them in the summer.

Blessed with great dribbling skills, flair and vision, Asprilla’s current tally of two assists looks like it’s just going to rise and rise as the season progresses and he continues his development.

Capable of playing out wide or in a more traditional ‘number 10’ role, we expect a lot of you will be trying to add this teenager to your ranks in FM23. 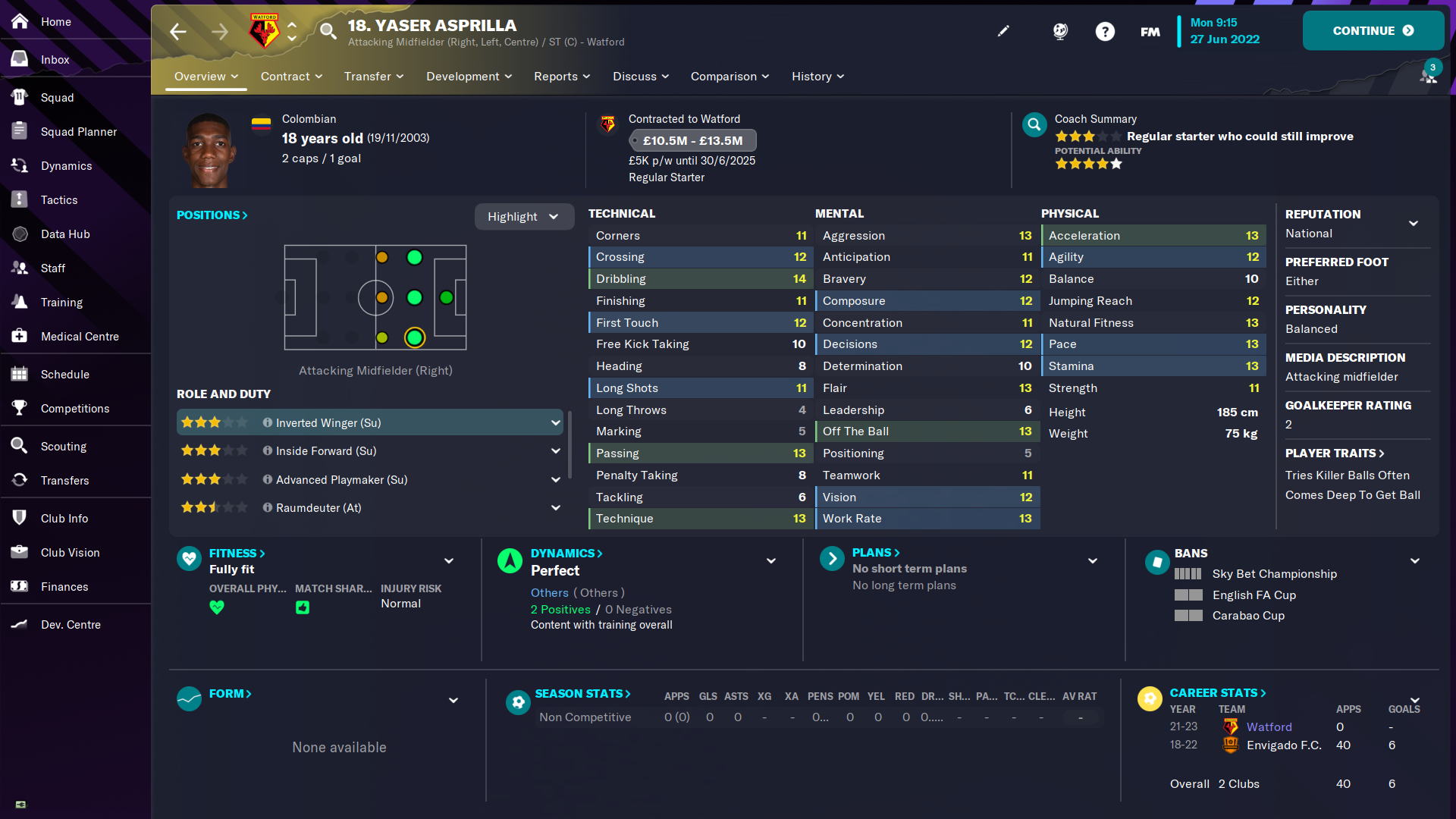 The only Sky Bet League One player on this list, talented Centre-Back Ronnie Edwards has been on the radar of many of England’s top clubs for a while.

Edwards joined Posh from Barnet in 2020 and played 34 times for them last season in the Sky Bet Championship. Although that campaign ended in relegation, it gave the 19-year-old the necessary experience to become a core part of their promotion bid this time round.

Mobile and gifted with a good First Touch, Edwards’ strong Attribute scores for Composure and Passing mean that he’s capable of both marshalling the backline and playing out from the back.

One of the most popular Wonderkids in FM22, Alex Scott is once again one of the EFL’s best prospects.

Well-rounded thanks to already having racked up 50 Sky Bet Championship appearances, Scott can play anywhere in midfield – deep, box-to-box in the middle of the park or creating chances with a more attacking brief.

He’s got great movement, ball control and vision – will you choose to build around him at Bristol City or elect to snap him up for your big project? 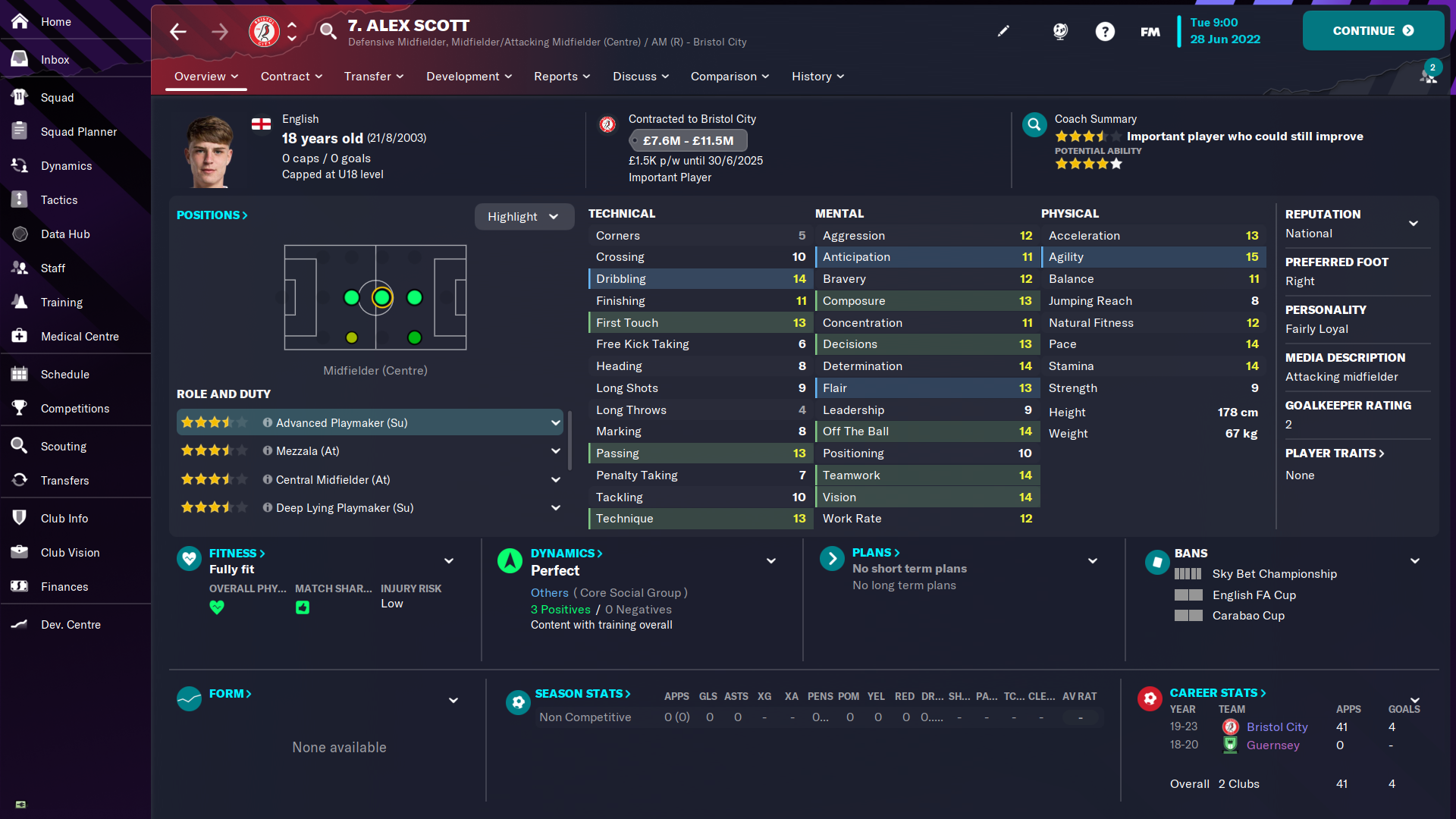 Just like Robins teammate Scott, Han-Noah Massengo is someone FM fans will know well from previous editions of the game.
The first player born in the 21st century to compete in the UEFA Champions League, French midfielder Massengo is a classy player who thrives in the big occasions.

Poised to really break out in FM23, he’s someone who has all the skills to thrive as one half of a top-quality double pivot and someone we expect several managers will be looking to sign once again.

With Reading since the age of eight, Coniah Boyce-Clarke is tipped by our Research team to be the best young Goalkeeper in the EFL.

Although he’s yet to make a first-team debut for the Royals, loan spells in the Vanarama National League, Under-21 games and international appearances for Jamaica at youth level have shown him be to an agile shot-stopper with a good sense of Positioning.

Your task in FM23 is to give Boyce-Clarke the relevant opportunities to continue his progression and fulfil his obvious potential.

Ashley Phillips has been attracting interest from some of the top flight’s biggest sides for the better part of a year and it’s no surprise.

Standing at 6’4, the Central Defender is unsurprisingly a physical player and good in the air. He’s also mobile and possesses a decent turn of pace, so by the time he’s filled out his body, he’s going to be an impressive presence anchoring the backline.

With six appearances in the Sky Bet Championship to his credit already, Ashley Phillips is a name we’re going to be hearing a lot more about in the years to come. 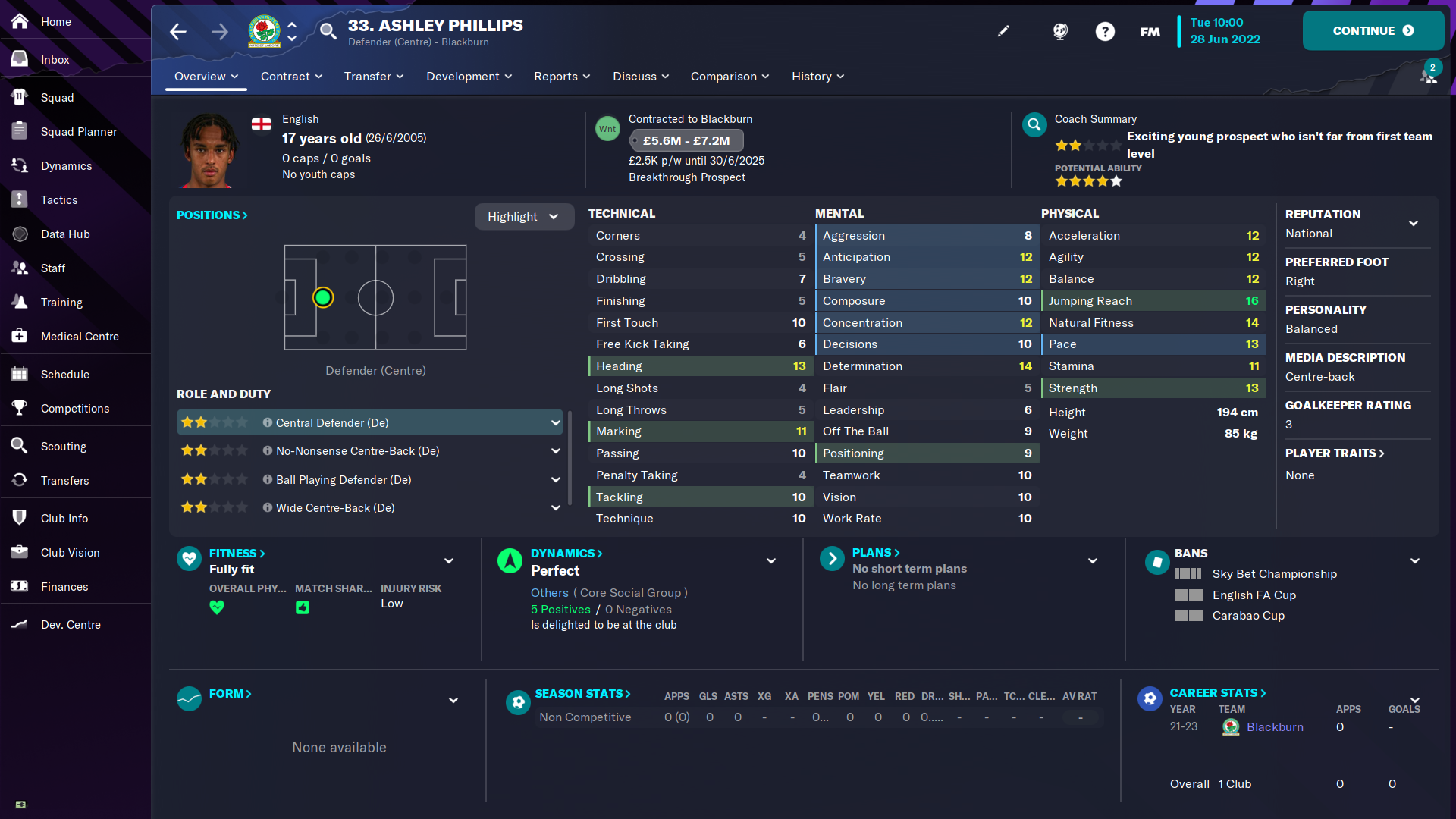 A summer signing from Le Havre, Abdoullah Ba figures to be a key part of a growing youth movement at the Stadium of Light.

The teenager is being bedded in slowly in real life but it’s already clear that he’s got the potential to develop into a special talent.

His Attribute scores of 14 for Work Rate, Determination and Balance and 13 for Pace, Technique and Long Shots will appeal to many managers in FM23, as will the fact he can almost certainly be shaped into a destructive Defensive Midfielder or a creative playmaker that sits just behind the striker.

The second Rovers starlet on this list to have been given regular game time by Jon Dahl Tomasson this season, Adam Wharton is a central midfielder destined for big things.

Last season he was a regular for the Lancashire club’s Under-18s; this year he’s starring alongside older brother Scott and bossing Sky Bet Championship games for the promotion contenders and making the step up look easy.

Wharton’s biggest strengths are his passing, aggression and ability with the dead ball. It’s not surprise that he’s already on the radar of some of England’s biggest clubs.

Adam Idah has been lighting up the scoring screens for Football Manager fans for a few years now.

The Republic of Ireland international has struggled with injuries of late, preventing him from getting a proper run of games with The Canaries.

He’s still got time to step up and deliver on his undoubted potential though, with a bevy of standout Attributes in FM23 – 16 for Acceleration, Strength and Penalty Taking, 15 for Pace, and 14 for Finishing, Determination, Work Rate, Anticipation and Team Work.

Given what his older brother Jude is already doing for Borussia Dortmund, there’s unsurprisingly a lot of expectation on the latest Bellingham to come through Birmingham City’s youth setup.

Jobe signed his first professional contract earlier in the season and the 17-year-old has been rewarded with regular, albeit short, appearances from the bench by Blues boss John Eustace.

Although there’s still a lot of scope for him to improve, Jobe has all the makings of a great playmaker – he’s a strong passer and possesses a good First Touch. By the time he fills out his frame, he could prove a core part of many of your midfields this year.

So, here they are, 12 of the EFL’s best young players in the FM23 database. Let us know which of these players you’ve signed and how they’ve done for you in your careers on social media @footballmanager.