If you’re anything like us, we know you love jumping into a new save as soon as the Winter Update drops so you can get your hands on the latest squads.

So, this window wasn't the best for big money moves... or even average money moves. That said, there's still plenty to get excited about in the Main Winter Update though as we've tweaked a number of players' attributes based on their real-life performances through the first half of the season. We’ve gone through the list and picked out our favourites, so here are the 12 improved players YOU should be getting your scouts to track. 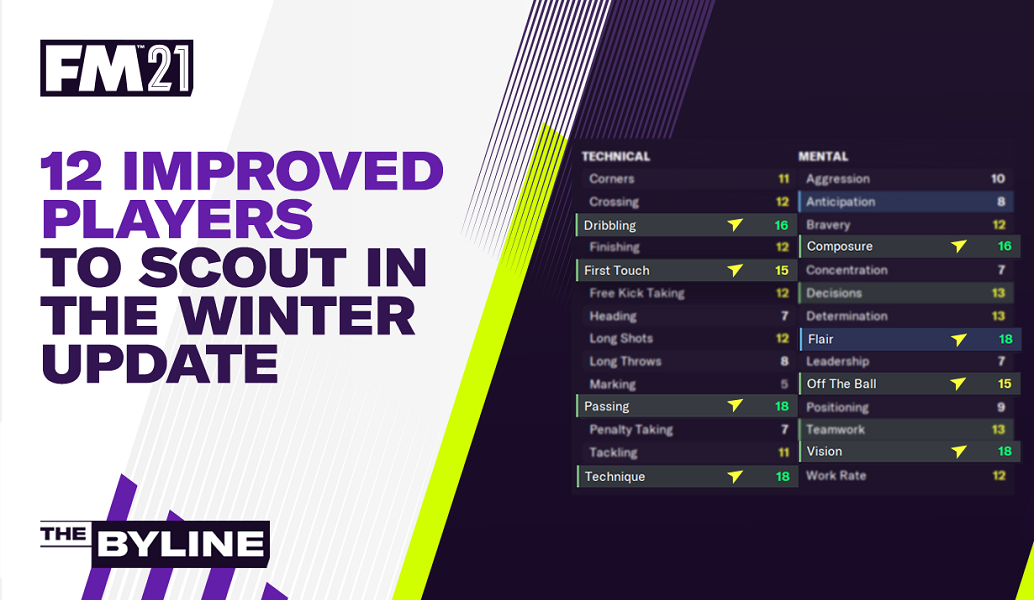 Yes, he’s here and we’re just as excited as you are. As we announced in our recent Wonderkid Scout Report, one-man goalscoring marvel Moukoko is making his way to FM21.

The mercurial 16-year-old has been breaking records throughout his short career and has been earmarked for greatness. That hype is reflected in his first ever Football Manager profile, with his Finishing, First Touch and Agility all rated at an eye-catching 15. His Pace isn’t bad either, coming in at 14, and this is when he’s practically still a teenager – who knows how good he could become 10 years into a save.

He’s not the only player in black and yellow to see their impressive real-life form reflected in the Main Winter Update, with fellow Borussia Dortmund youngsters Giovanni Reyna and Mateu Morey also receiving upgrades.

Inverted Winger Harvey Barnes has lit up the top-flight this season, slotting into an exciting Foxes front line. Now one of the first names on the team sheet, Barnes has produced when it matters, coming up with goals and assists in key moments as Leicester City continue to battle with the country's elite’ clubs.

Young full-backs James Justin and Luke Thomas have also received upgrades in certain areas after impressing in real life, Justin one of the league’s brightest sparks while Thomas has shown maturity beyond his years when called upon. We wish James Justin all the best in his recovery from injury and look forward to seeing his teammates remain competitive towards the top of the league.

Despite Torino’s difficult first half of the season, Wilfried Singo has shone through with a series of assured performances. At 6’3, the Ivorian was initially seen as a right-back but has often been played on the right-hand side of midfield during this campaign.

He’s been scintillating for Torino on the break with his Pace, Strength and Dribbling. While his anticipating and decision making sometimes reflect his tender age, he’s got all the tools to go far and could be retrained as either an out-and-out winger or a more central box-to-box dynamo.

We will never run out of Wonderkids. A leader of the next generation is Bayer 04’s gifted midfielder Florian Wirtz. After making his debut after the resumption of football last year, the 17-year-old has become irreplaceable for Bayer 04, recording seven goals and seven assists across 27 games in all competitions. Capable of playing anywhere in midfield or behind the striker, his best position is probably as a ‘10’, where he can best utilise his great Dribbling, Vision and eye for a long shot.

Bayer 04’s strong first half of the season has also yielded improvement for some of their most consistent performers, like goalscoring winger Moussa Diaby and midfield workhorse Daley Sinkgraven.

26-year-old striker Giorgos Giakoumakis has been nothing short of a revelation in the Eredivisie this season. In his first game for the club, he scored a hat-trick and he’s not let up since. In truth, his strike rate looks like the sort of thing you’d get from a five star newgen. At the time of writing, he’s got 22 in the league from 22 games; the next best is 14. That sort of prolific finishing doesn’t go unnoticed.

Lille have been surprise front-runners in France this season and central to their success is winger Jonathan Bamba. While the club have lost some of their elite attackers in recent seasons, the 24-year-old Parisian stayed at Stade Pierre-Mauroy and has continued to deliver the goods. He’s the creative hub of Christophe Galtier’s side and, at the time of writing, had six goals and eight assists to his credit. Summer signing Sven Botman, who has been almost ever-present at the heart of Ligue 1 Uber Eats’ second best-defence, has also received an increase to his attributes.

It can sometimes take a player time to acclimatise to the demands of a new league or a differing manager’s approach to the beautiful game before they produce their best. That’s very true of towering Danish centre-back Jannik Vestergaard, who has overcome a tricky start to his Saints career to become one of their most reliable defensive performers. At 6’6 he’s always been a dominant force in the air but this season his benefitted from an improved reading of the game and greater composure on the ball.

Like Vestergaard, a lot of Southampton’s players produced some excellent football in the first half of this season and that’s reflected in the Main Winter Update. Star players James Ward-Prowse, Danny Ings and Alex McCarthy are among those to receive upgrades, with youngsters Dan N’Lundulu and Nathan Tella also seeing marked improvements after entering the first-team picture.

Reigning champions FC Midtjylland are currently leading the way once again in the 3F Superliga. While no one player has been running away with things in the goalscorers’ chart, striker Sory Kaba has been key to the team’s success. The Guinean has got five goals and three assists through the first half of the regular season and that level of production has seen several of his Attributes improved in-game. After struggling to make his mark in Spain or France, Kaba looks like he’s finding his groove in Denmark and with his aerial prowess and ability to hold up the ball, he could be on the radars of several big clubs moving forward.

A swashbuckling Spanish defensive midfielder running the show in Rome? Yes please. Gonzalo Villar is one of several AS Roma players to benefit in the Main Winter Update from their impressive start to the season. The 22-year-old made his breakthrough last season after a switch from his native Spain and he’s continued to make big strides in the Giallorossi midfield, demonstrating excellent passing, dribbling and a reading of the game that makes him an interception maestro. While he’s not been a major goal threat for Paulo Fonseca’s men, fellow midfielder and vice-captain Lorenzo Pellegrini has, and has received a slight upgrade as a result.

For managers looking for a hidden gem, look no further than AS Roma prospect Tommaso Milanese. The teenager attacking midfielder has received one of the biggest improvements of the Main Winter Update after a very good end to 2020 that saw him make his professional debut and score his first senior goal for the club in December.

Welsh striker Luke Jephcott is one of the most talked-about young players in the EFL and with good reason. At the time of writing, the 21-year-old had made good on his breakthrough last season to score 18 goals in 30 games for Plymouth Argyle across all competitions. It won’t be a surprise to us if clubs from England’s top two tiers come knocking soon.

Following their impressive campaign so far, it was inevitable that several of AS Monaco’s impressive young guns would get an upgrade. Tireless defensive midfielder Youssouf Fofana is the pick of the bunch after producing a string of impressive displays, but winger Willem Geubbels and attacking dynamo Sofiane Diop are now also more well-rounded. Another player to get an upgrade is German forward Kevin Volland, who has been central to everything good about the principality club going forward since joining last summer.

Highly rated for several years, French midfielder Romain Faivre had only made one senior appearance in Ligue 1 Uber Eats before this season. Given a prominent role with Stade Brestois 29, he’s thrived. Five goals and three assists from his first 26 games don’t paint the full picture of just how good he’s been – statistically he’s one of the division’s most creative midfield players. With a great eye for a pass, strong dribbling skills and wizardry with the dead-ball, Faivre looks set to only go up and up from here. 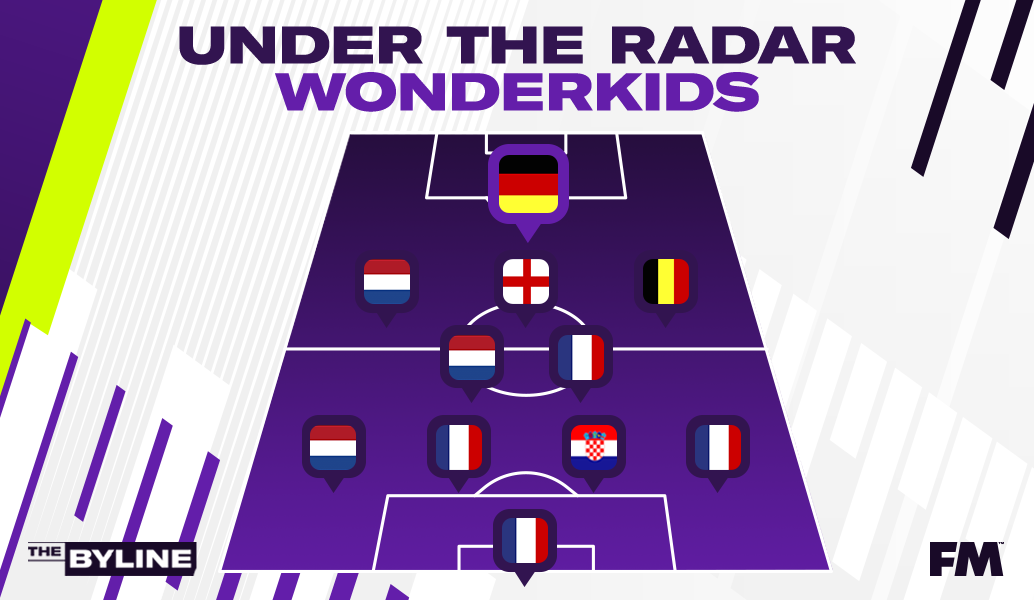 XI Wonderkids you need to add to your shortlist